Tomato Pincushions and the Lowly Pin 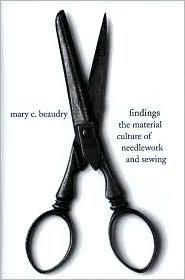 It’s written by an archaeologist from BU and focuses on the archaeological remains of sewing found in historical sites around the world. I’m fascinated by all of it, in the most nerdy way–right now, I’m on the chapter about pins: how they’re made, when and how they were created and how they changed over time, and what they look like when found in an archaeological site. I had no idea there were so many varieties of pin heads throughout history, or that until the 1800s, pinning for sewing was the least of their uses! Apparently, clothing was all but pinned in place for most of human history, and pinning for sewing was somewhat second place.

So this morning, while eating breakfast (I only ever get to read recreationally before bed and over cereal–and yes, I am such a dweeb that learning about archaeological pin facts counts as “recreation” for me), I was learning about pin cushions and their amazing variety.

(from the Southampton City Council Archives)

This is commonly referred to as a “needle case” by archaeologists, but the author of this book points out that since the case would likely have been stuffed with a sawdust-filled cushion and used to store pins, as well, that the carved bone tube attached to a long cord would have been carried on an individual–usually a woman–for emergency pinning during the day. Say, if her veil slipped or her corset busted a string. I love that idea: that something so small is a reflection of real life, and that when we consider the Middle Ages (from which this needle case dates), I think of them as being sort of staid and dry and uninteresting, but they were filled with people who had concerns both large and small, ranging from “Will Father return from the Crusades?” all the way down to “I sure hope the wind doesn’t knock my veil down!”

Considering that every pin until 1834 was MADE BY HAND, they were quite expensive, and represent a primary investment in a household, making their storage and even display a big part of daily life.

So imagine my delight this morning when I browse my reader and find this gem, from Gertie’s New Blog for Better Sewing: 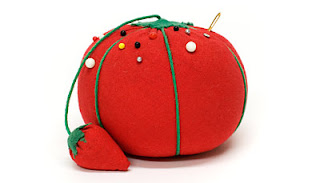 She’s taken the time to write a post about the tomato pin cushion–my all-time recommendation for pin cushions, and a classic–with some lovely factoids and great comments from readers. Thought you’d all like to check it out! (Her blog, by the way, is smart and witty and a joy to read, every day–you really might want to consider adding her to your feeder.)

Tweet
← Whipstitch: One of the 100 Atlanta Businesses to Know!
Convo w my husband →

4 Comments on “Tomato Pincushions and the Lowly Pin”