So, at this point, the vast majority of Sewing Buddies have been matched. I’ve sent out one. last. invite. to those aspiring Buddies to make sure they’re not missing something in the junk folder, but with over 200 folks joining the Sewing Buddies this year, I’ve officially CLOSED Sewing Buddy sign-ups until 2014. Whew!

In years past, the Sewing Buddy Project was really just a matching system: I volunteered my time to match names to one another, and once the introductions were made, the Buddies were more or less on their own, like pen pals. When I had pen pals when I was younger (back when parents thought it was safe to assign a child’s name and mailing address to a total stranger, which lets you know just how I old I really am), I don’t recall there being any guidelines or suggested activities–and if there had been, I feel pretty confident saying I wouldn’t have followed them, anyway. But over the first couple of years of this Sewing Buddy experiment, I heard back from folks that they wanted a little more guidance and structure to their Buddy-ness, some activities that joined them and their one Buddy to the whole of the rest of Buddy-dom, in one large Buddy mass. I love that idea, and so last year we did a series of Buddy challenges. This year, we’re taking it up another notch.

When they were matched, Buddies made suggestions of projects that might be fun to do with one another, things that would bond them to each other on the small scale, giving them shared experiences to discuss via email, and also that would bond them to the larger group, with chances to be inspired and to learn from a greater canvas. I’ve selected about four of the suggestions–and trust me, there were some really, really good ones, but there were some that came up over and over and made themselves pretty obviously the best choices for the group–for us to all participate in as the year goes along. They’ll be visible and open to the public on the blog, but also shared privately within the Sewing Buddy community via our monthly newsletter. Makes me think of the Little Orphan Annie decoder ring from A Christmas Story, where he hears the code over the radio but only folks with the ring can learn the secret message. Except I can solemnly vow I won’t attempt to make you drink your Ovaltine. 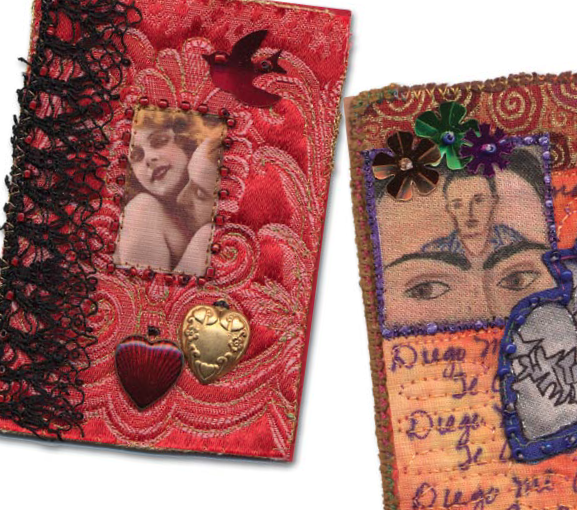 To begin with, an idea that I’ve been captivated with for some time, but wasn’t quite sure how to inject into my daily life (or even the life of the blog): Artist Trading Cards. These are tiny works of art, about the size of a business card, that give you a chance to play around with color and fabric and fiber and texture. They have a cool history, and are simple to make for anyone who has a machine and some scraps of fabric lying around–including notions, ribbons, trims, buttons, and whathaveyous. 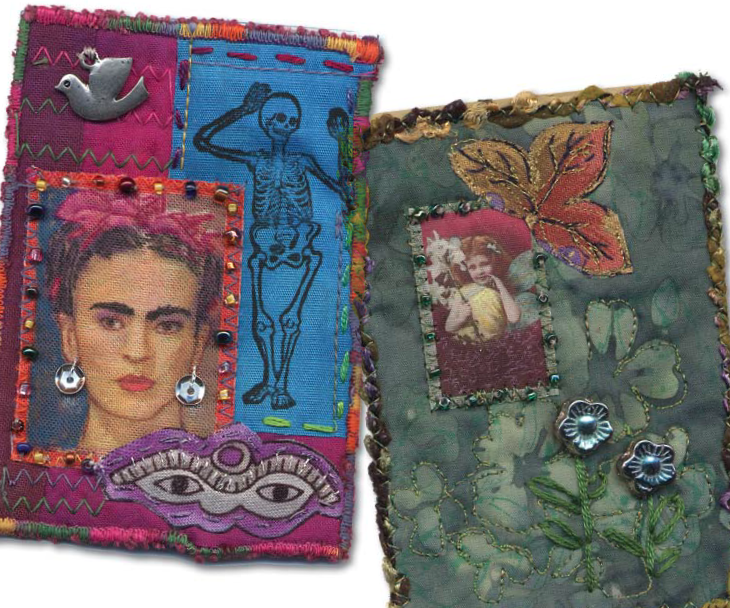 They don’t all have to be fancy–some can be incredibly simple, like this one that I made from a scrap of fabric I ran through my ink jet printer to add my logo: 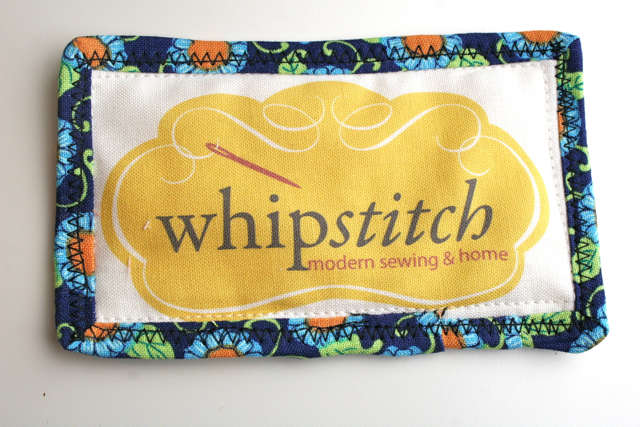 (Don’t you love printing on fabric? If you haven’t done it before, it’s easy! Plenty of online tutorials, or you can find a project using this technique in my new book, Stitch Savvy. Be sure to drink your Ovaltine!) 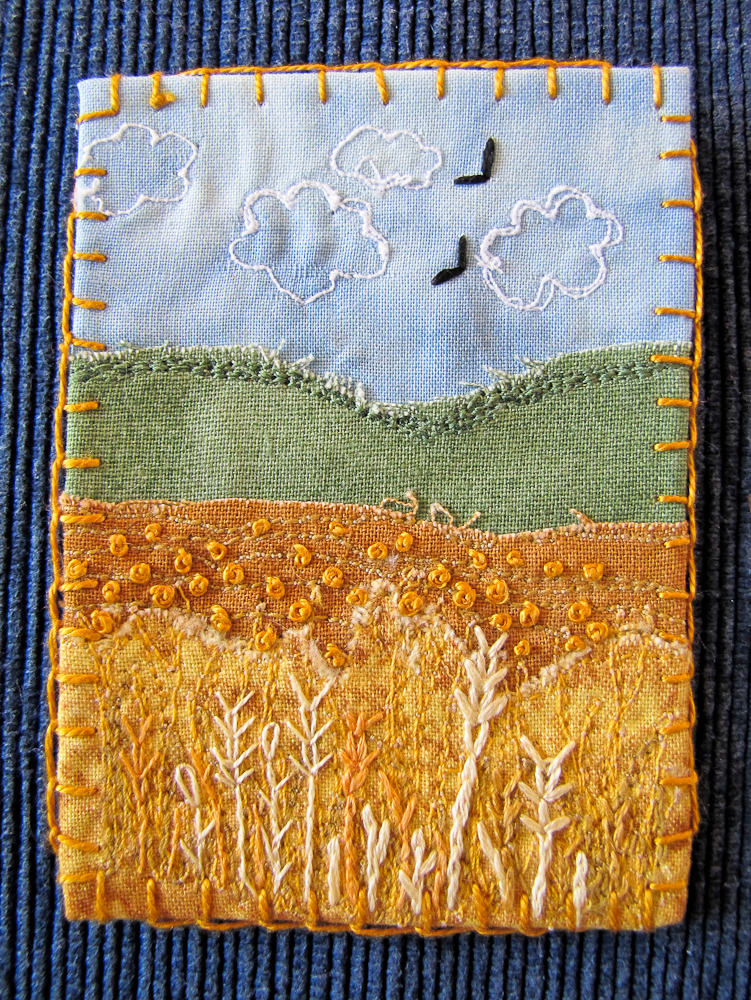 The great thing about Artist Trading Cards is they’re the teensiest of quilts to take along with you and exchange with friends. They can double as business cards. You can make one for yourself to wear at conventions and guild meetings. And they’re so small you can tackle one in just a few minutes. 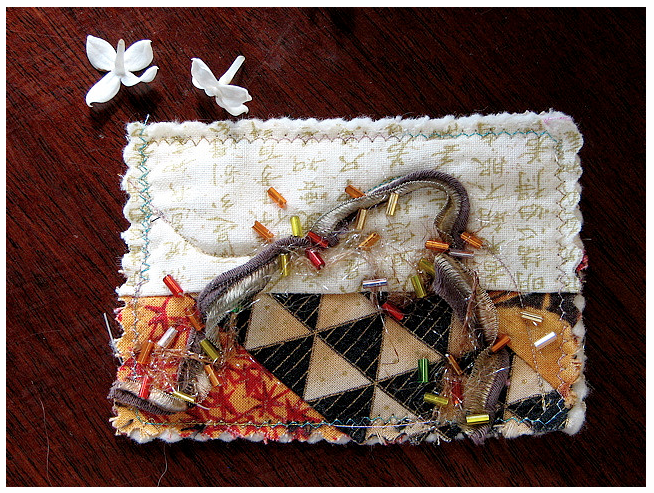 So the first activity for the Sewing Buddies in 2013 is just that: make an Artist Trading Card and exchange it by mail with your Sewing Buddy! It’ll be a small, do-able project that you can share with one another. Use this free e-book from Quilting Arts magazine for guidance, or check out the quilted artist trading cards on Flickr and Pinterest for inspiration. I can’t wait to see what all of you will make!

Fabric Design Weekend Was So. Much. Fun. 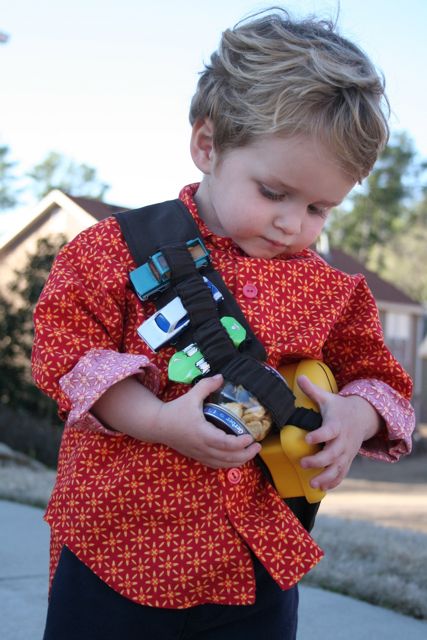 We’re having some work done on the ceiling of ou

I made my husband a terrycloth bathrobe for Christ

Our youngest loves pigs. This is the sleep mask we

I started making notes three+ years ago to start a

Our National Park Junior Ranger patches have a hom

It’s finished!! My #mushroomshirtdress is up on