We’re rolling along on the kitchen at the new house over here–plan is to move in next Thursday (eek!) and be in the house for Christmas Eve.  I am in terror any time I really allow my brain to focus on that too much, so instead, I’m focusing on the progress that’s been made in our kitchen!

Since my butter in life is a good Before & After, let’s really hit the mark on this one and see some shots.  This is the original kitchen, on the day of our inspection: 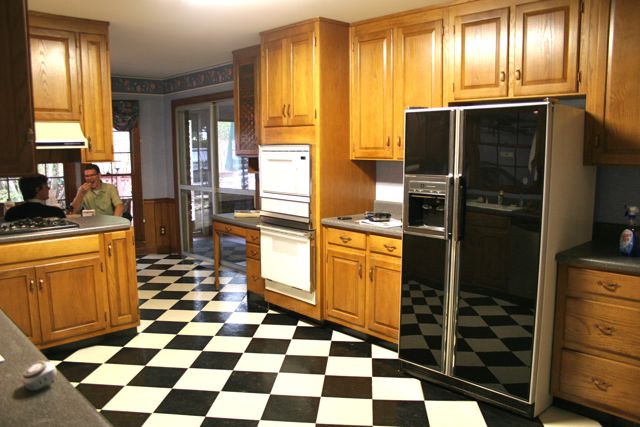 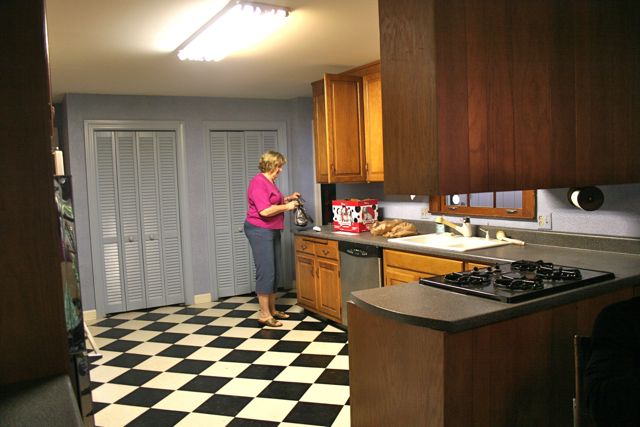 Cabinets are original, we think, but since appliances are not–and the rest of the house had a major interior design make-over somewhere between 1983 and 1986 (as will become painfully apparent when you see other before photos moving forward), I think the kitchen may have had some work done then, too.  We don’t know for sure, but as we peel back more layers, it’s starting to look that way.  The floors, at least, are not original–they’re peel-and-stick vinyl tile over the original linoleum.  I actually didn’t hate the floors, but they’re in pretty rough shape and weren’t going to come clean and white ever again, so they went.  Cabinets will be painted, appliances were deemed unsafe by the inspector (except the dishwasher, which we donated, and the fridge, which the seller removed from the house when we weren’t looking), and window treaments are a nightmare.  Don’t get me started on the wallpaper border and the country blue trim.  Eeek, indeed.

Here is where we were last time you checked in: 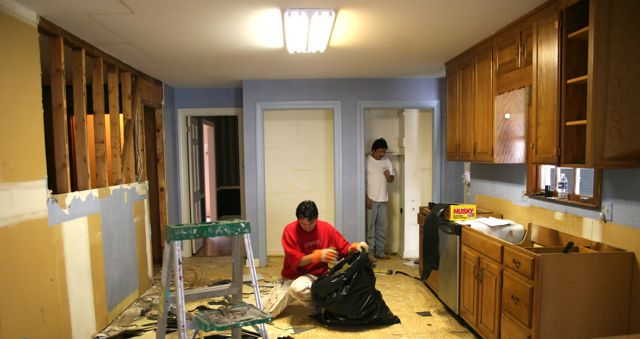 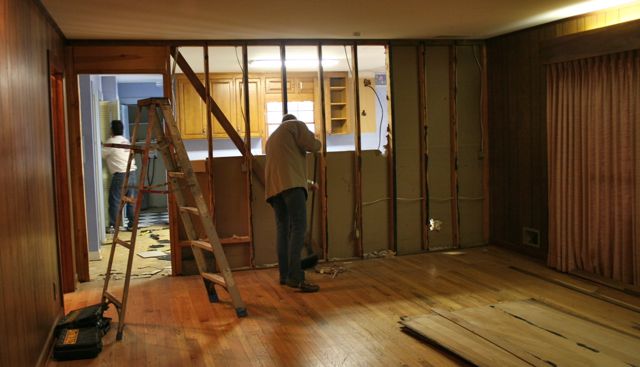 We pulled the cabinets so we could cut the wall between the kitchen and den to make a bar/overlook.  We’re adding a new cook top there with a downdraft, and tore out the cabinet overhang that divided the kitchen from the breakfast area to open up the light in there.  Already, at this stage, there is SO much more light, and the whole space feels better.  Since this represents about 1/3 of the house, and about 8/10 of where we’ll be spending our time while we’re in it, we wanted to make it as welcoming as possible.

Here is where we are as of this morning: 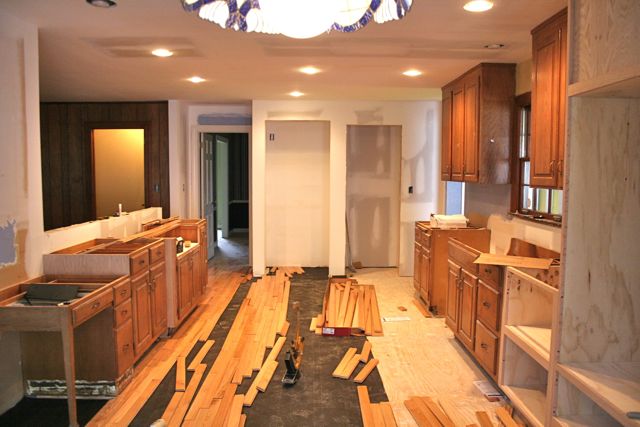 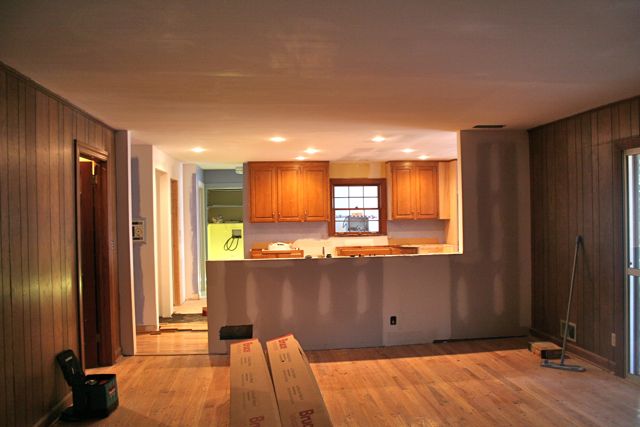 The weird double broom closet thing is gone, along with all the blue trim, and will be replaced by a relocated fridge and a new pantry.  The half-wall for the new bar is in place, and the cabinets are relocated up against it–including the desk, which I secretly love.  The soffit cabinet over the sink is gone, the florescent light is gone and replaced by recessed lighting, and the window treaments have been removed over the bay window.

Looking from the sunroom, you can really see how just losing that wall and rearranging the cabinets makes the entire house feel more cohesive, and less like a bunch of dark rooms strung together: 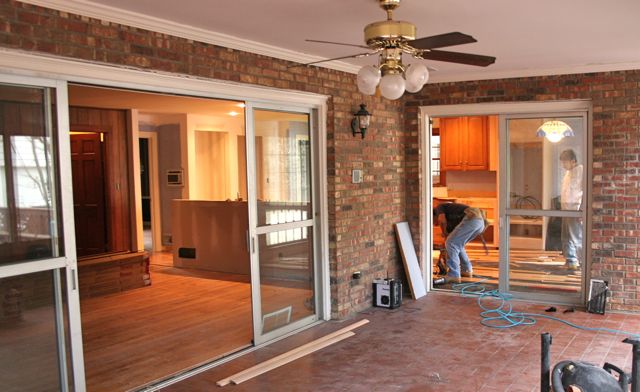 This is the view from the “brown room,” as we call the paneled den, into the kitchen, before the demolition: 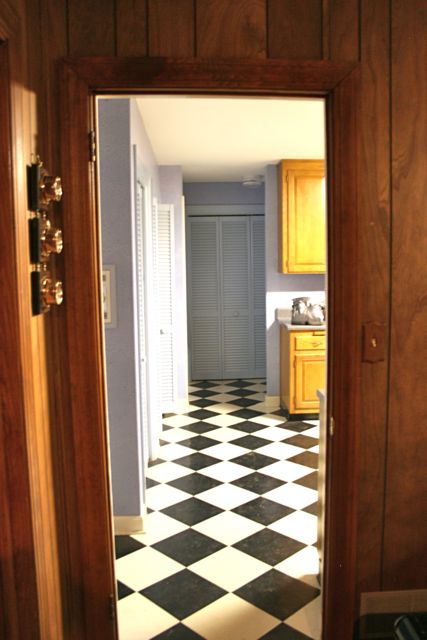 And this is the same doorway from the other direction, as of today: 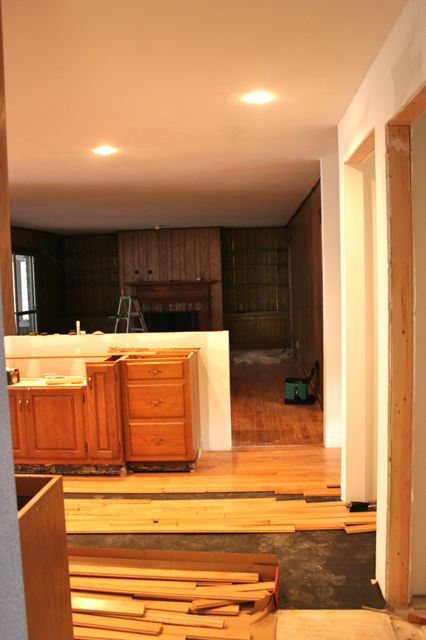 New, prefinished hardwood floors are going in, and since they don’t have to be sealed on-site, the floor will be done this afternoon.  LOTS of painting left to do, but since the majority of the kitchen is done, that will get knocked out next week!

Counters were a splurge, but my husband–who always knows someone–has a friend who recently built a house and has every connection under the sun for discount supplies.  She acted as her own general contractor to save mucho dinero, and has been tremendously generous with what she learned, so we scored white marble counters for our new kitchen at less than HALF of what we were quoted before this project began.  She also found us an appliance guy who got us new appliances for 40% off PLUS a free new dishwasher (which is why when the electrician mentioned he knew a family in need who could use the old one, we were happy to let him have it to give to them).  All that goes in next week, the very last thing before we move in!

Today, since I can’t work on painting the cabinets while they lay the floors, I’m finishing up work on some very (VERY) pretty things for the new book, as well as my do.Good Stitches blocks.  Show and tell to come! 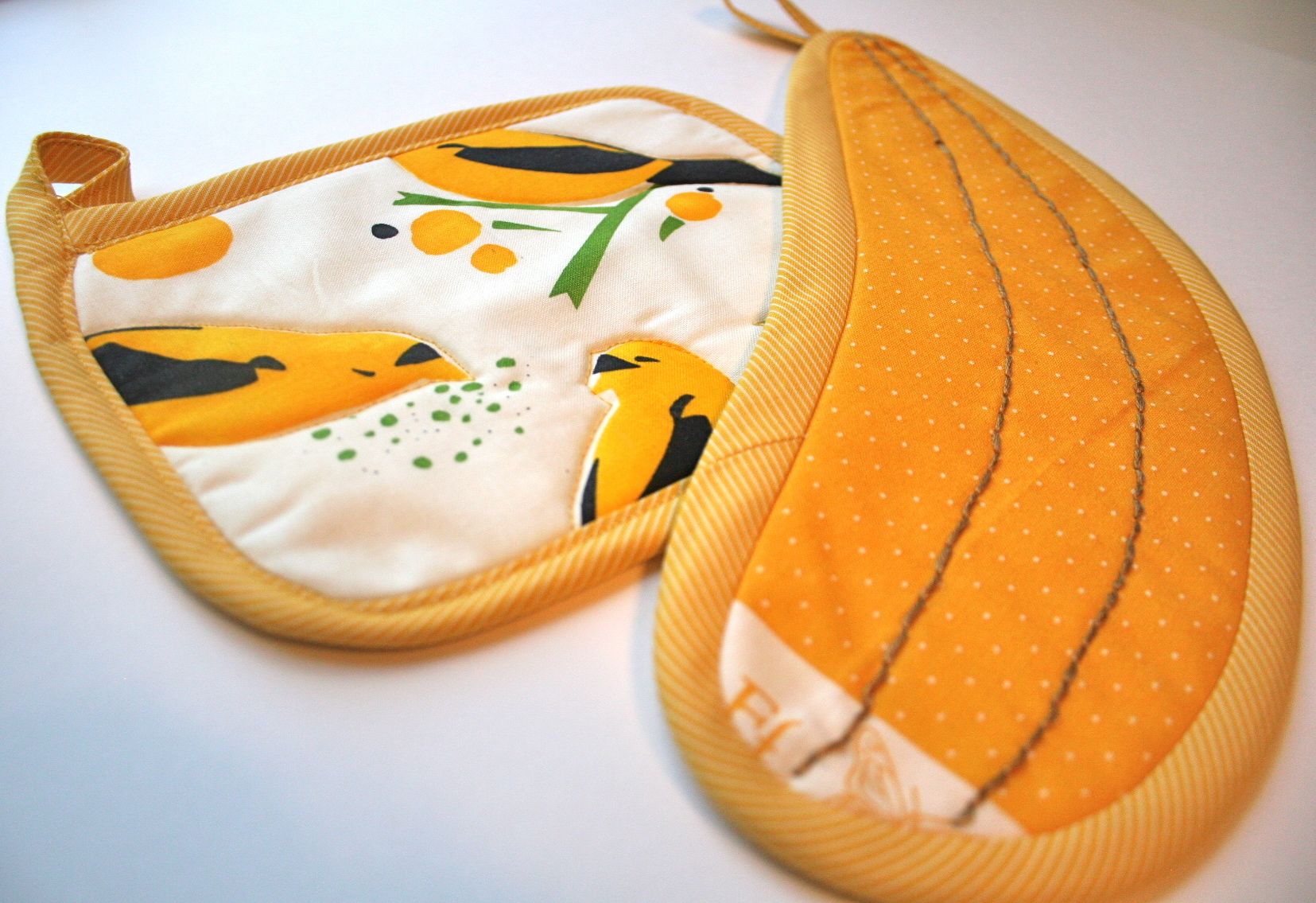 Holiday Gifts: Tutorials to Get Them Done