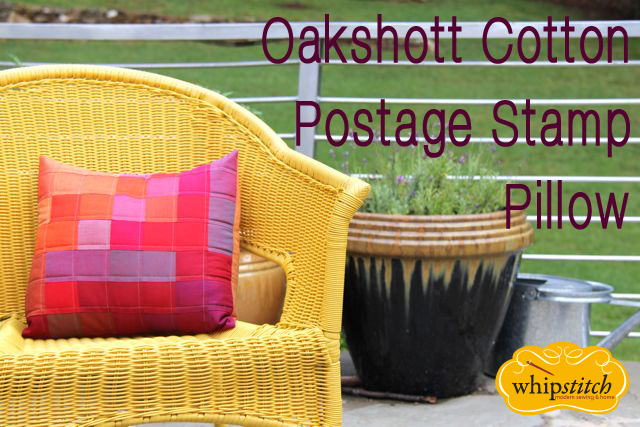 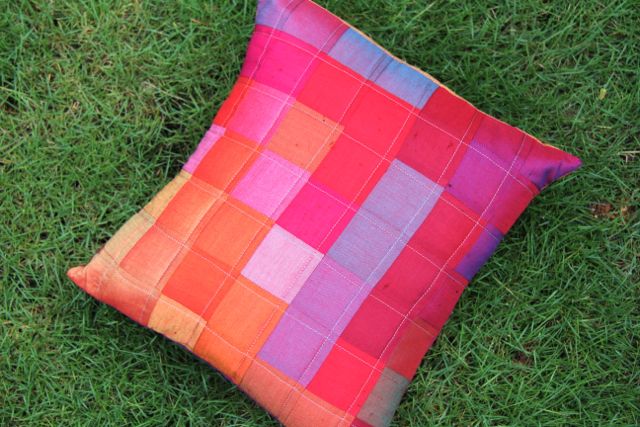 I agreed to be part of the Oakshott Ruby Mini-Quilt Challenge with Sew, Mama, Sew mostly because I didn’t really know anything about Oakshott cottons.  I think I had a vague idea that they were crossweaves, meaning that the warp and weft fibers of the fabrics are different colored threads, which can lead to some really cool shifts in shading.  But beyond that, I was pretty much flying blind.  Which, I think we can all admit, is both exhilarating and intimidating. 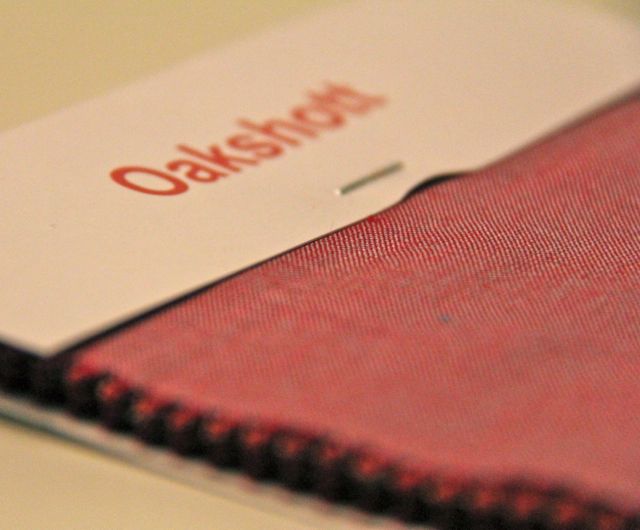 The fabrics came, and were just what I’d thought: crossweaves with variations in color and shading depending on the angle and the light.  I love fabrics like this–Moda makes some, and so does Westminster, and they’re always so interesting to look at and work with.  These Oakshotts are fairly substantial, and I don’t think would do well for garment sewing, but they’ve got a nice hand for quilting, and since the challenge was to make a mini, I dove in. 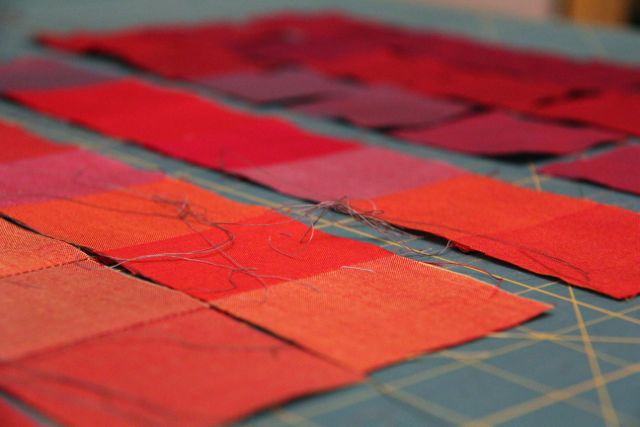 I was initially inspired to make something like this, but as I was cutting and prepping my colors, realized that (1) I would have to work at a teeeeensy scale in order to make the effect of the inspiration piece, and (2) that the monochromatic palette I was given might not read as clearly as I wanted for a design of that type.  So I shifted gears and decided to used the monochromatic colors to my advantage, in the form of a stylized paint chip layout. 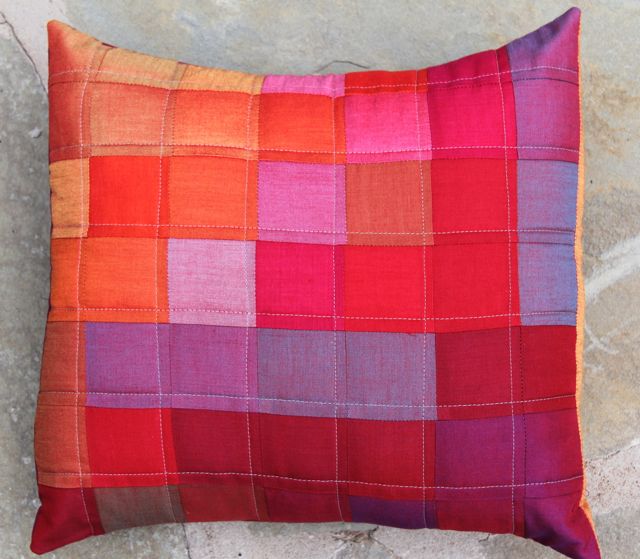 The result, if I do say so, is pretty exciting.  I love the way the variations in the threads give a real shimmer and movement to the squares when seen in the light, and I love the way the shades of red and orange and purple work their way across the body of the piece from left to right.  I made this into a pillow cover, thinking that the roundedness provided by the pillow insert would show off the changes in color a bit better–part of me wants to see MORE of the layout, though, and I’m undecided about whether it would have been best left as a mini. 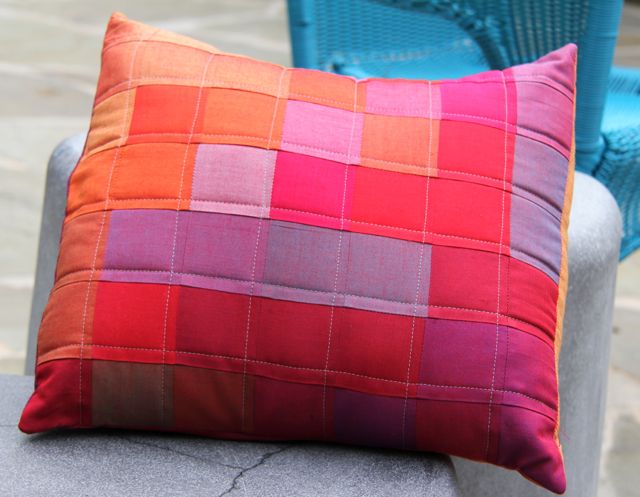 See how at different angles the threads catch the light and change colors?  Look at that bottom right corner, where a single square morphs from red to purple.  I wanted that effect over the whole body of the quilted piece, and think the shades I was given really provided that. 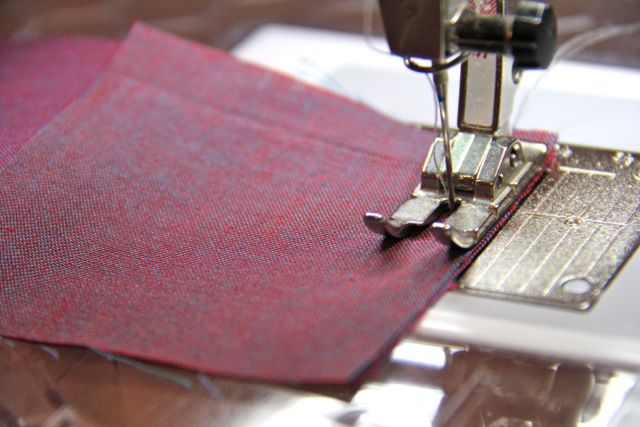 Construction was pretty straight-forward postage stamp stuff, and after making a zillion postage stamp quilt blocks, took me under an hour for this 14″ square piece.  This shot gives you a good glimpse into the structure of the fabrics: see how the threads running one direction are a bluish color, and in the other are red?  Those are the warp and weft fibers–running perpendicular to one another–and by weaving them in two different colors of thread, the fabric achieves a real dimension to it that you can’t get with a standard one-color flat weave. 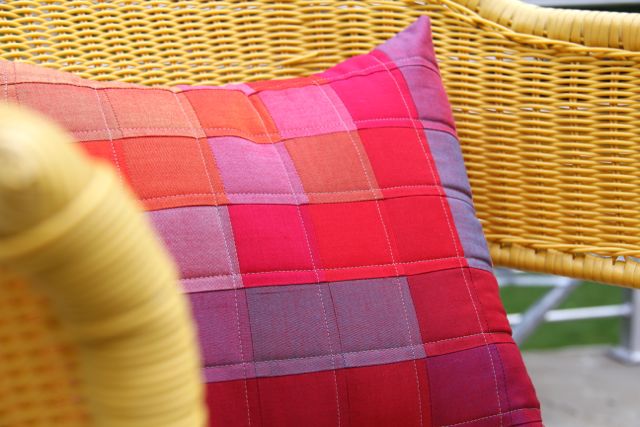 The quilting was pretty basic, too.  I considered quilting on the diagonal, like both my scrappytripalong quilts, but thought that might detract attention from the gradations of color.  Then I thought I’d quilt 1/4″ away from the seams on both sides, but realized after doing the first pass that by quilting on only one side, I had suggested (without mimicking) the lines between the color chips on a paint sample card.  And so I left it with quilting on a single side of the seam.  At 2.5″ squares, that’s more than enough quilting to stabilize this piece, and I think it gives a nice counterpoint to the changes in color.  All the quilting was done in a medium neutral grey. 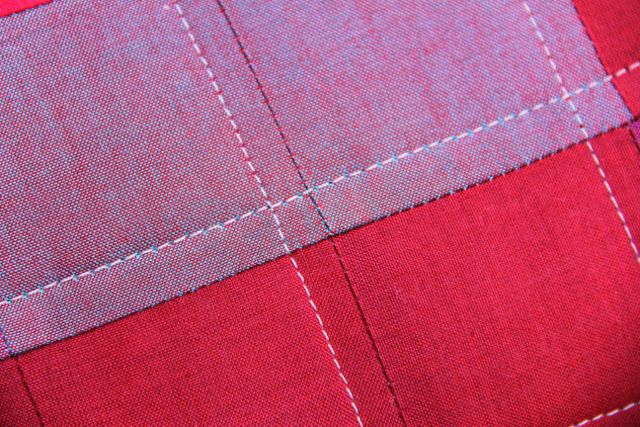 There are points on the piece where two squares of the same color touch, which is fine–I didn’t want for every single piece to be a different shade, since I wanted to create the illusion that the color was changing gradually across the body of the pillow. 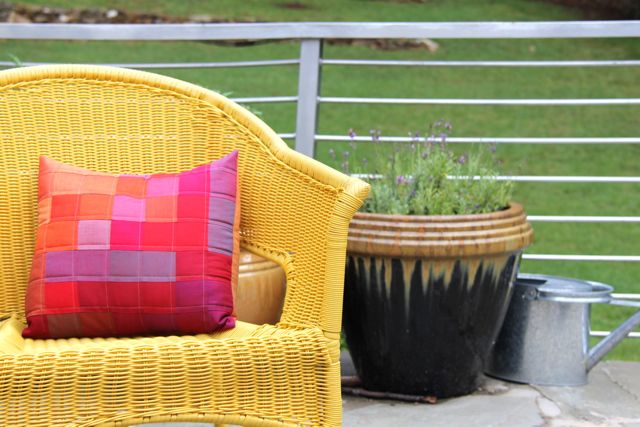 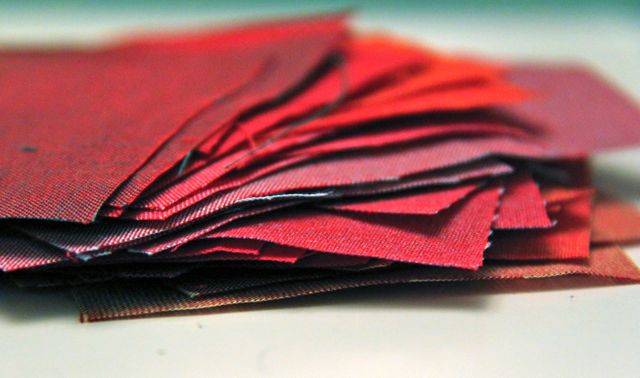 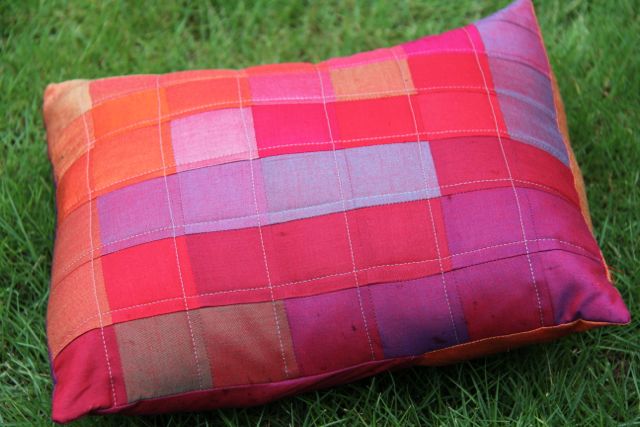 Special thanks to Sew, Mama, Sew for inviting me to play along–I loved getting to meet these fabrics and see what they can do!  And thanks to Oakshott Fabrics for providing the fat eighths I used for this pillow.  Something tells me it needs a matching partner to play with, and I have just enough left!

Want to win your OWN fat eighth bundle of these delicious red-toned fabrics?  Leave a comment below (or on any of the other Oakshott Ruby Mini-Quilt Challenge posts) and you’re in the running!  Good luck!