Took a little longer than I anticipated, but it turned out super cute!  I’m delighted to share with you:  The Manly Travel Power Cord Roll-Up, just in time for Valentine’s Crafting! 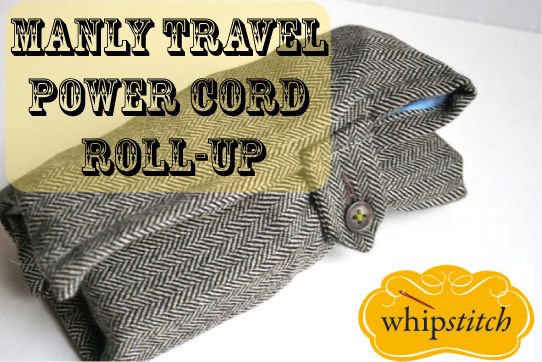 This tweedy little wrap has space for multiple laptop/phone/digital music accessories and cords, and bundles up nice and tidy to fit in a corner of a suitcase for travel.  Plus, it’s masculine enough to make husbands want to use it, but sweet enough to look good no matter what.  Woot! 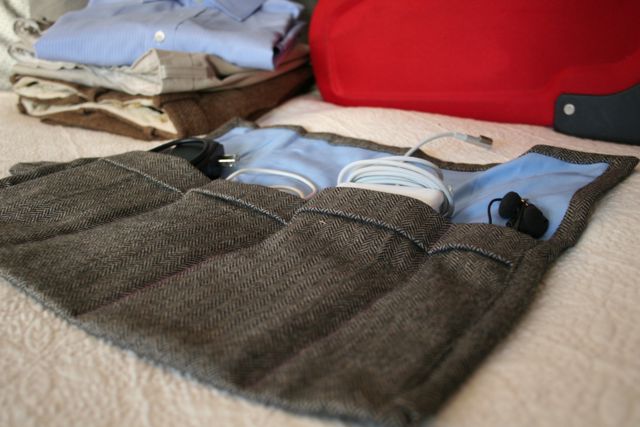 I made my version from a pair of thrifted suit pants, but you could make it from a couple of fat quarters with no trouble (which means that if you like it enough, you can make a girly version for your lady friend, too). 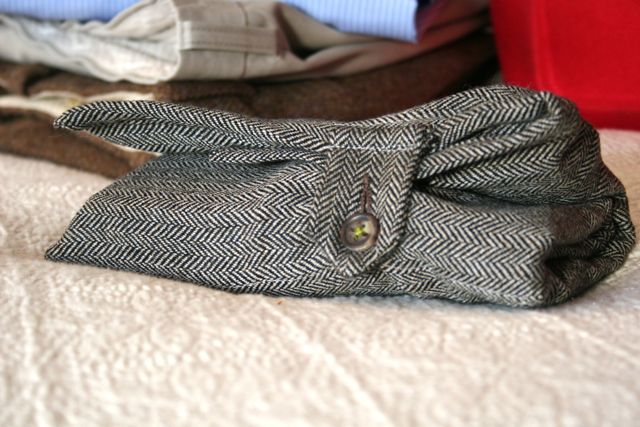 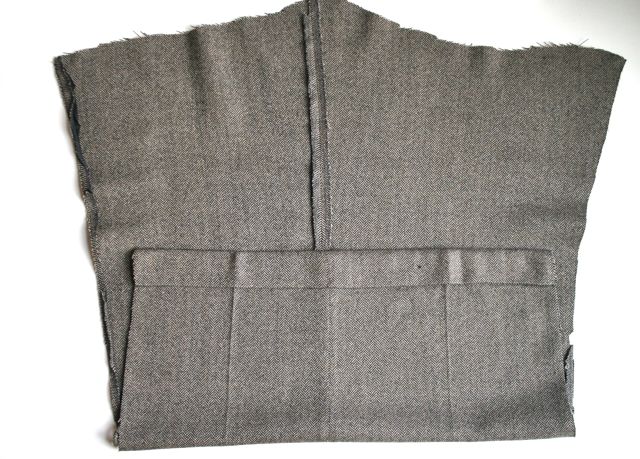 Because I harvested my fabric from a pair of pants, I had to begin by prepping it–I chopped off both legs, thinking I’d need two, but settled on just using one.  I slit up the inseam and pressed and steamed as much as was reasonable.  I left the cuff intact–it’s an interesting detail and I wanted to utilize it in the new design. 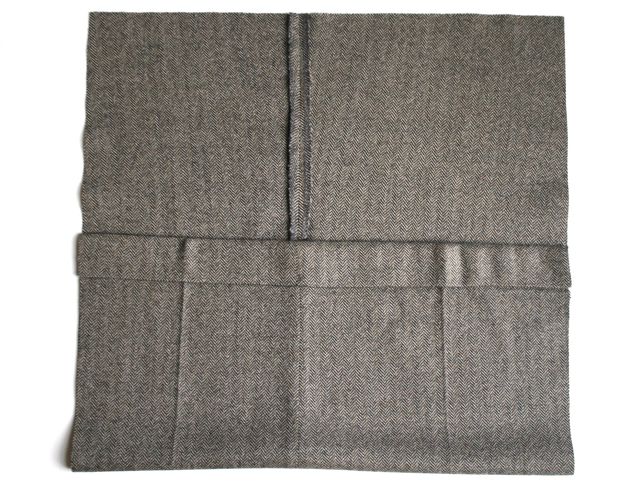 Square up the fabric.  I began by guesstimating the dimensions of the pocket I wanted to make–by eyeball, but it’s right around 6″ deep.  I folded that up, then trimmed the sides even, followed by squaring off the top. 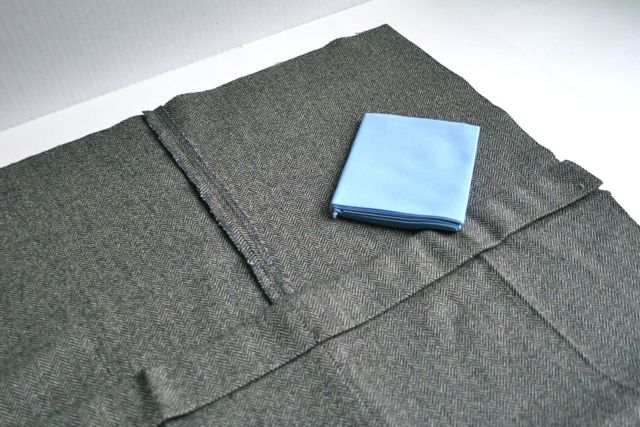 The obvious selections for a lining might have been white or black, but since both of us have both white and black power cords, I wanted to choose something that would contrast and make them easier to dig out–no point in making a cord tote that makes it tougher to locate your cords.  I chose a soft, masculine blue that reminds me of dress shirts.  This is a fat quarter of Kona cotton. 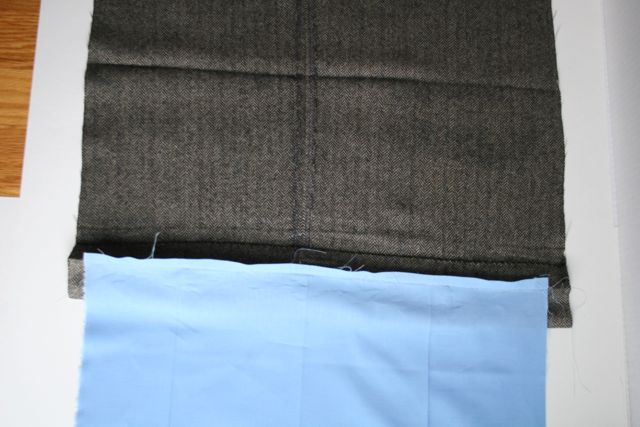 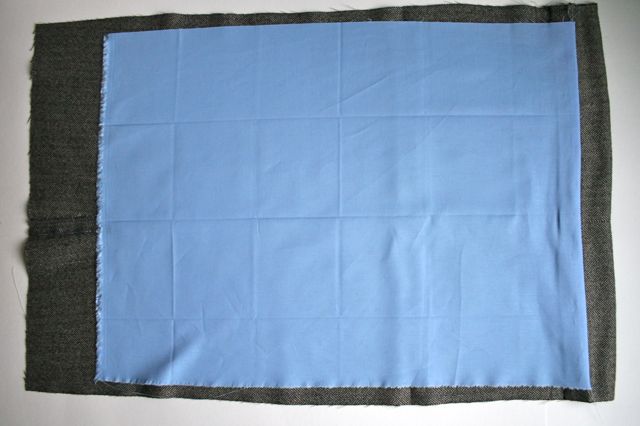 Flip the lining over so that pieces are wrong sides together.  Press the seam nice and crisp–use plenty of steam.  You can see in this image that there’s a lip of tweed sticking out–that’s the cuff from the pants, which I’ll be using to make a folded edge on the pocket front. 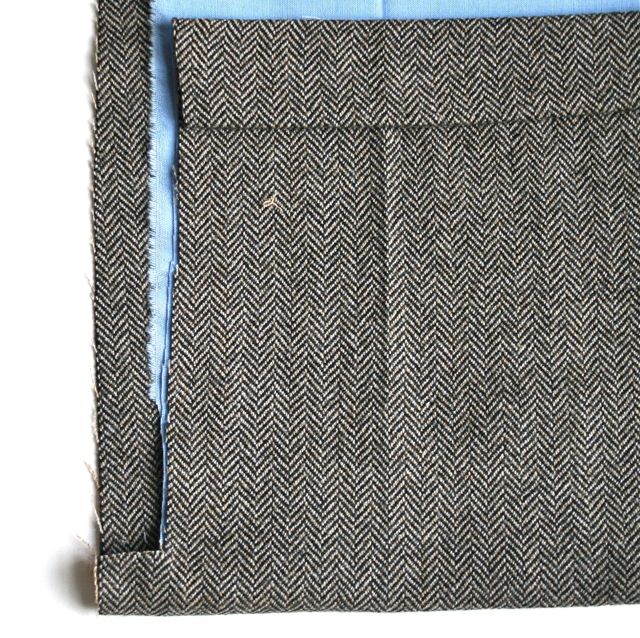 Fold up the pressed edge to create your pocket.  (If you’ve looked at Stitch by Stitch at all, you’ll begin to recognize this as a distant cousin to the picnic placemat project–not deliberate, but I guess my mind tends to work through problems in similar ways!)  At each side, cut away a small chunk from the top down to about 3/4″ of an inch above the fold.  We’re going to create a self binding, and you’ll need to leave that little chunk behind for the mitered corner. 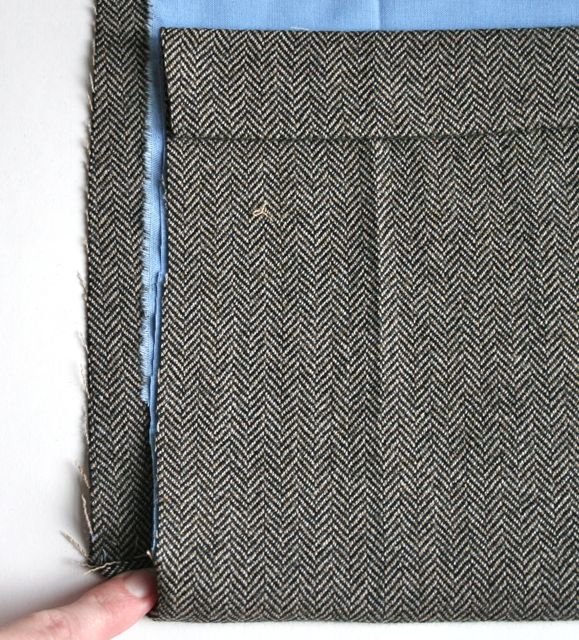 Press in that little corner with the tip of your finger until it forms a triangle.  Then fold the raw edge in 1/4″ and press.  Fold again another 1/4″ and press again. 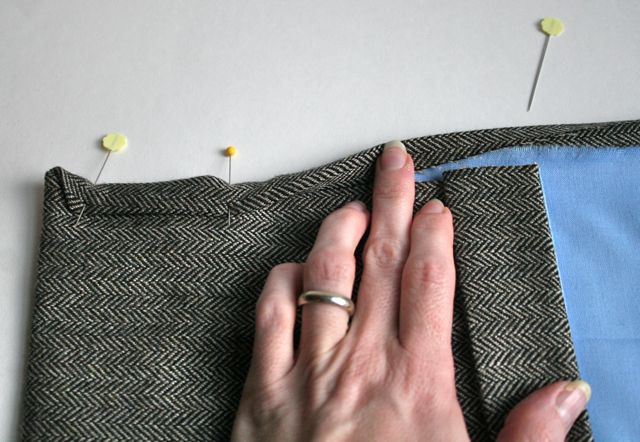 As you press, pin the edge in place, heading up toward the top of the wrap.  Remember, you’re folding the edge OVER the pocket, so you’ll want to be certain that the pocket depth is right where you’ll want it later.  Repeat on the opposite side; once both right and left are done, you can do the upper edge. 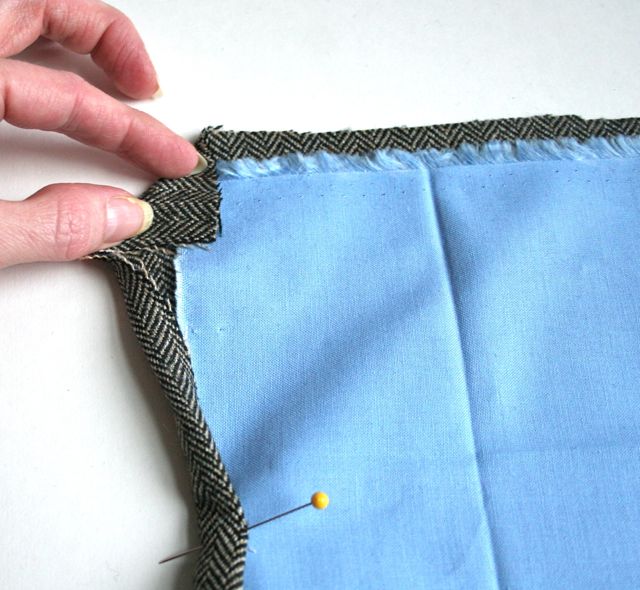 At the upper edge, fold in the corner again, making a triangle like you did before.  Press in place. 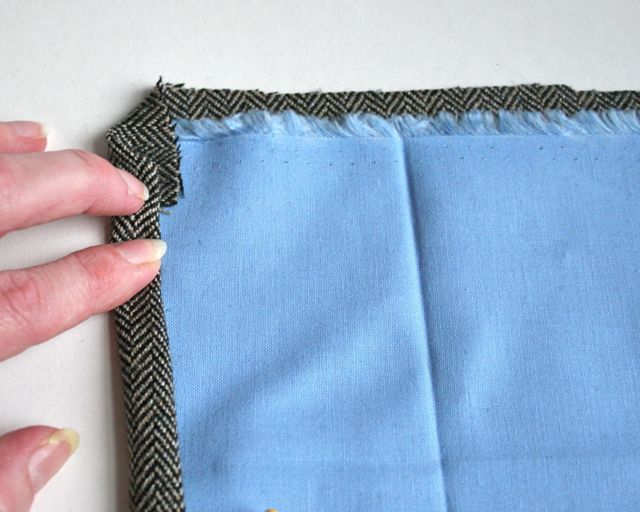 Fold the side in, double folded, until it meets the triangle you’ve pressed. 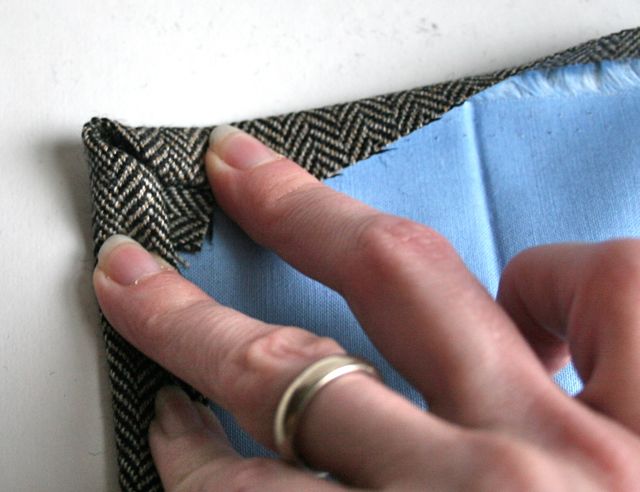 Fold the upper edge the same way, catching the upper edge of the lining as you do.  Press in place–don’t worry that the tip of the triangle is poking out a bit, we’ll fix that in the next step. 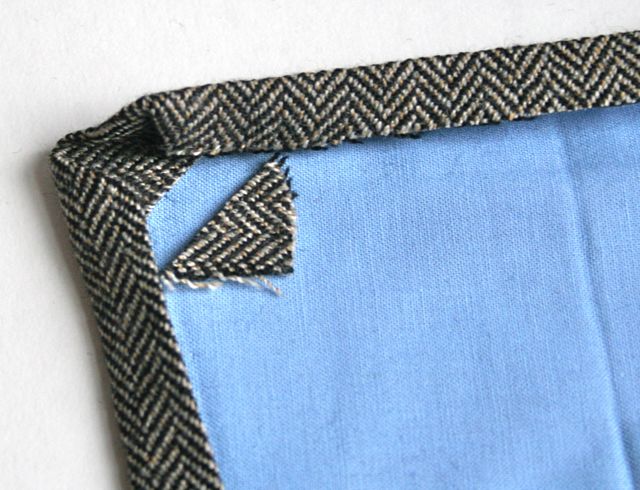 Open the side and top back out, then trim off the tip of the triangle so that you’ve cut it below the creases left from pressing in the sides. 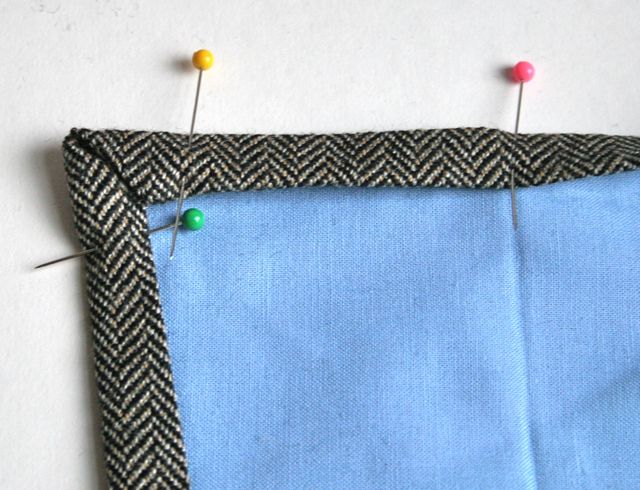 Re-fold the sides and upper edge and pin in place.  Repeat all this on the other upper corner. 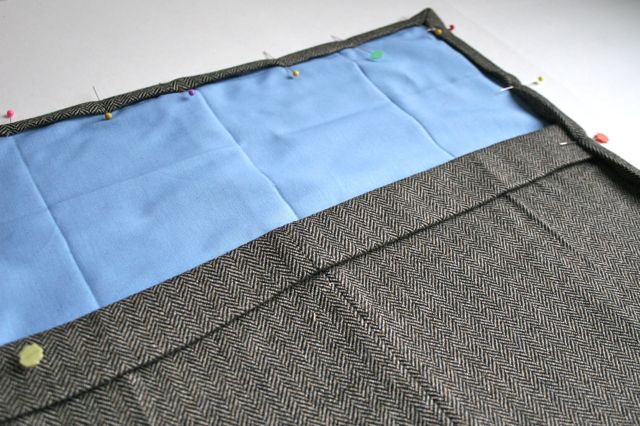 Now that everything is pinned and ready, you can stitch!  Begin at one lower edge, backtacking securely, then sew up one side, pivot at the miter, sew across the upper edge, pivot again, and sew down the opposite side, backstitching when you get to the bottom.  Press, press, press. 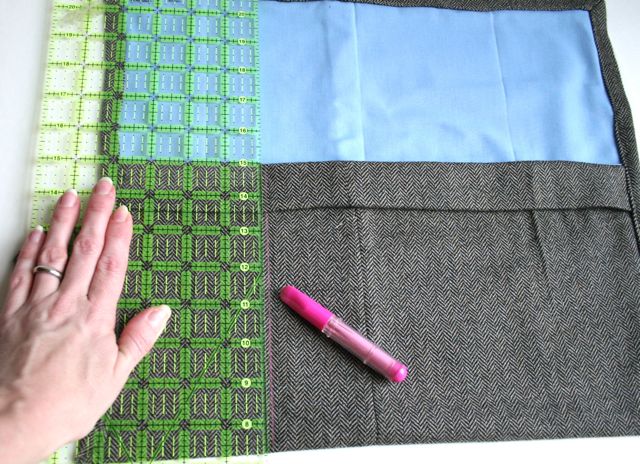 You’re in the home stretch now!  Time to mark your pockets to sew the channel stitches that will form them.  The upper portion, where the lining is visible, will become a flap to cover the cords and keep them inside the roll-up, so we don’t need to stitch there, just on the pocket itself. I used my Clover chaco liner, because its sharp “teeth” allow it to place chalk on the nubby tweed without pilling it or dragging across it the way tailor’s chalk might.  Use a ruler to help you keep your lines good and square with the lower edge of the roll-up. 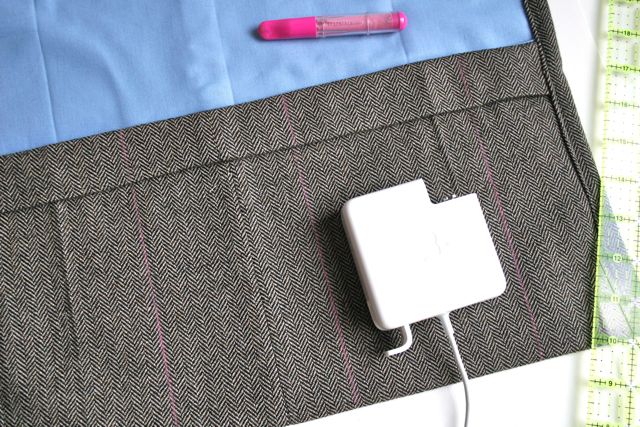 As you’re drawing your lines for your pockets, think about what’s going in them.  I made sure to have one that was at least 4.5″ wide, since both my husband and I take our Mac chargers with us when we travel.  Remember that you’ll need more than the width of the object, since these things are all three-dimensional, and will take up more space than just the measurement of their width.  I like having sections of varying sizes, so I mixed it up some. 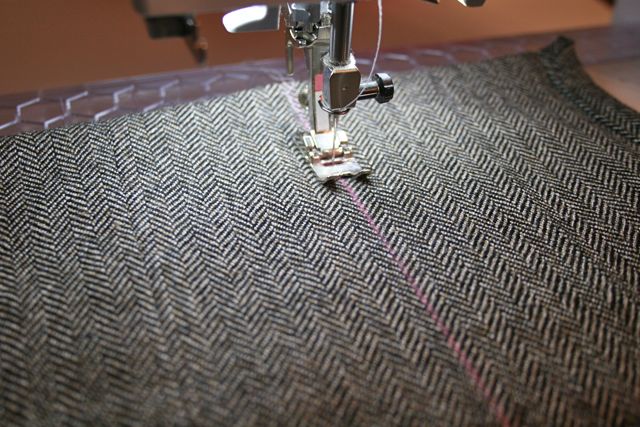 Head to your machine, and simply straight stitch on top of your lines, backstitching at each end to secure the stitches. 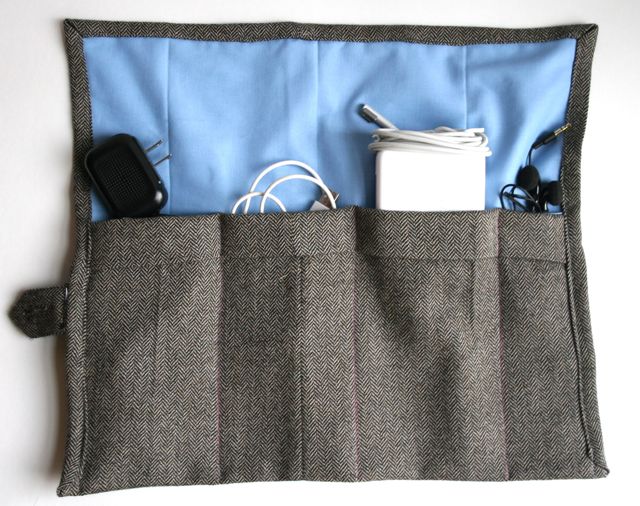 And you’re done!  You can tuck in a cell phone charger, an iPod accessory cord, a large laptop charger, even ear buds.  The flap folds down to cover the whole thing and keep everything secure so it won’t slip out when the baggage guys snatch your bag from you while you’re trying to board the plane and toss it carelessly beneath into the luggage compartment. 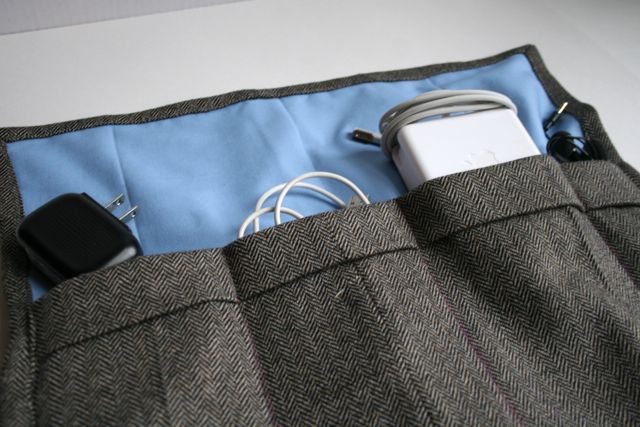 I really like the menswear feel of this project, and how the lining genuinely reminds me of a shirt inside a man’s suit front.  Sexy businesswear!  For your cables and cords! 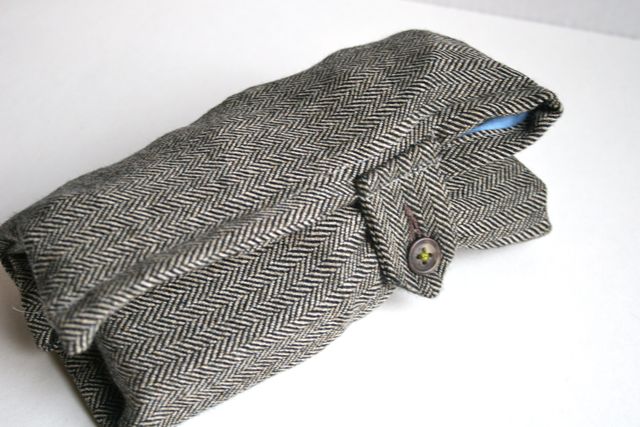 For a closure, I took the tab off the waistband of the pants and repurposed it as a button loop–I loved the feature on the pants, and wanted to find a way to include it in the design.  If yours don’t have one, or you’re working with straight fabric and not thrifted goods, you can make a tab, or you can use a hair elastic stitched through to make a small elastic loop to go around the button.  I filled and rolled up mine before marking the button placement, then hid the stitches inside one of the pockets so they’re not visible from either side of the roll. 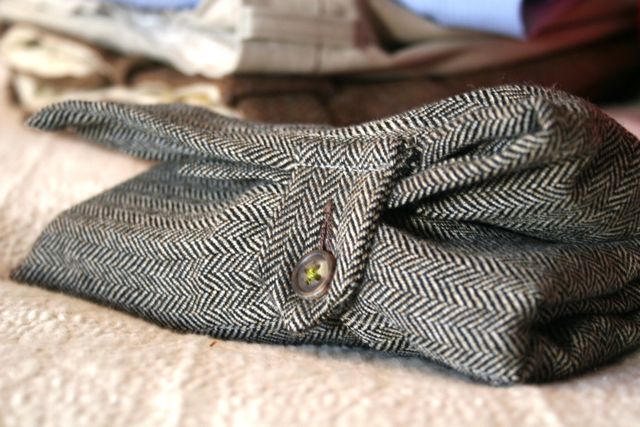 It’s traveltastic!  We two are heading to the mountains this Valentine’s Day weekend for a couples’ retreat.  This will be his travel gift (despite the fact that we’ll get no reception up there–at least his cords and cables will have a nice place to rest while the two of us are reconnecting!). 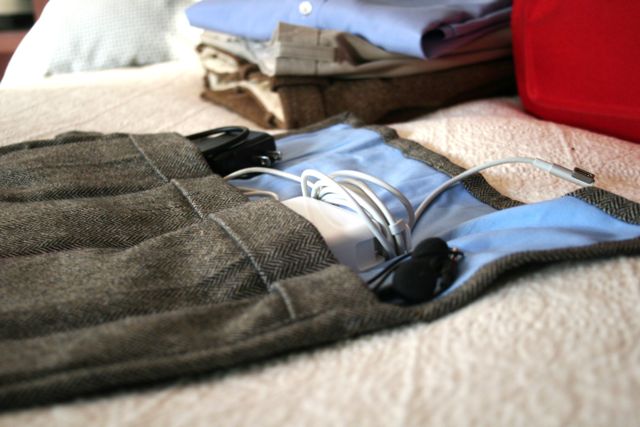 Contest: Valentine's Day Sewing Project to Make for Your Man 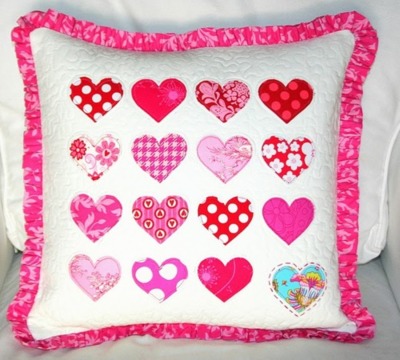 When you break it down, there really aren’t that many holidays you can’t celebrate with a little something you sewed.  But that gets trickier when you’re making a gift to give for that holiday.  And it is further complicated when the recipient is a dude and the holiday involves much pink and fluffiness.

Take Valentine’s Day.  I don’t get super serious about Valentine’s Day, not really, but a card is nice, maybe some flowers.  Then we can all move on.  Some folks get a little more into it, and they enjoy a meal out, maybe some tickets, something commemorative.  Right on.  I’d love to make something for my husband this year, but let’s just get it out on the table: I won’t be making him the pillow above.  It’s precious and would be super fun to make, but there is no way in creation that my husband would put this on our bed.  Or in his office.  Although I’d love to have a photo of that, just for kicks.

I’ve dug around the World Wide Internet Web a bit today, seeing if there were some great projects out there, and pickings are pretty slim, ladies.  Not much to be had in the sew-for-my-man-but-not-pink-and-fluffy-or-likely-to-make-him-hide-it-in-a-drawer-so-he-won’t-have-to-hurt-my-feelings department.  I doubt he’s going to do much with a heart-shaped…well, much of anything, actually.  He’s a very sensitive and affectionate guy, but he’s not at all pink and fluffy.

So my question is this: what do you sew for a MAN when you’re sewing for Valentine’s Day?  I would be thrilled to have some suggestions, but I think we can do better: how’s about we make a game of it?  Leave your suggestion in the comments for a man-friendly sewing project to give as a gift this Valentine’s Day, and I’ll pick the funnest one* to work up a tutorial, to be posted on the blog for FREE before the big day rolls around.  Sound fun?  I don’t have any idea what to expect, but I know y’all have some amazing ideas–I say, share one that you’ve got floating around and haven’t figured out how to make yet, and I’ll do the math for you!  Or maybe there’s one that you feel ought to be out there in the world, but you’re not in the place to make it–let me do the work.  We’re all winners!

Comments will be open through Friday, when I’ll announce the chosen idea and begin working on the tutorial.  Tutorial will be posted by February 6.

Oh, and let’s keep it PG-13, if we can, y’all.  You’re all very nice girls, but some of the articles I read while researching this little project were a tad…ahem…specific.  I think we can do classy, witty AND crafty, don’t you?

*This is totally subjective and based on what materials I have on hand/what I think will make for a fun project–but I’m open to informal voting in the comments, too, so let me know your idea and feel free to give a shout-out if you see someone else’s that rocks!

I for real wear this #TovaTop with near constancy.

One step closer with this monster. Measures roughl

My husband retired yesterday after 23 years of mil

Growing up, I was taught to avoid conflict, to "se

By far one of my favorite details about the #moder

See? GOES WITH EVERYTHING. Bonus: the neckline edg