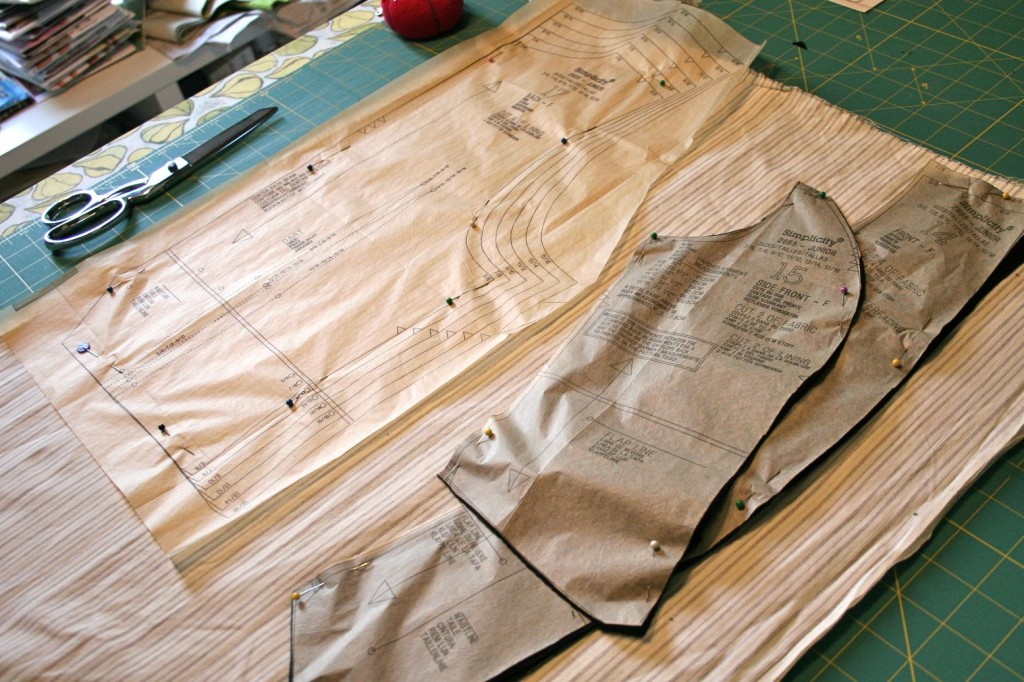 Today hasn’t really been my best day.  Our oldest and I selected a pile of patterns a while back, and I’m working on whipping up a vest for her in anticipation of her big 80s-themed birthday party this weekend.  “Whipped” being a bit of an over-statement, since such a project isn’t exactly a quickie.  And with a Saturday deadline looming, I’m feeling the pressure.  And now, at the eleventh hour, she doesn’t like the fabrics, and we don’t have the right lining, and I’m getting a little frustrated.

And then I snapped.  It really was the culmination of a series of comments, not one in particular, but this time it really got to me.  I felt so incredibly frustrated that she was looking at this project like magic, as if I can snap my fingers and make a vest appear in a poof of smoke.  Poof!  She has these elaborate—oh, so so so so elaborate–visions of how she’s Going To Look and What the Kids Will Think that it wears me down.

So as I’m sitting, splitting my time between fuming at her attitude and feeling guilty for my reaction, I realize: I was the exact same way.  And the worst episode, heaven help us, was over a vest.  A vest made of fabric in a cow pasture print.  It was 1992.  I say that by way of defense, rather than explanation because: cow pasture fabric.  My mother was working on a vest for me, which I had asked her to make.  And the entire time she was sewing, I was fantasizing, picturing myself in my head and How I Would Look when I wore this miracle vest (please: 1992, remember).

And then I tried it on.  The shoulders were quite broad, as are my own, and looked strikingly reminiscent of shoulder pads.  On a linebacker.  My bustline, which has never been wallflower-shy, dictated that we make a larger size, which made my waist look like it was bigger than…well, bigger than an 18-year-old wants it to be.  I shrieked, I stomped, I cried, and I shouted.  I was so hurt and upset and disappointed and felt so unattractive that I moped and took out my sadness all over my mother–the woman who, keep in mind, had done ALL THE WORK to make this vest of questionable taste as per my request.

Now here I am, back there all over again.  But on the other side.

How many of us have given up or back-burnered a sewing project–or GASP! quit sewing altogether because of a failed garment, or one that was less than perfect?  How many of us have expected to see a finished project come off the machine and be flawless the first time, and fit us spectacularly, and waltz out the door with a breezy attitude?  Most, I assume.  Me included.

Sewing clothes can take time.  Not just time to make the garment, but time to get each one to fit the way we’d like.  Does that mean that you must slave for years to get it right?  NO, NO, NO!  It does mean that we serve ourselves best when we don’t imagine that the project we’re making will raise us up to the level of Cindy Crawford (again: 1992), but rather that each project is one step forward as we learn what we like, what we want, what we hope, and how to make the fabric and the thread all work together to get us there.  I’m having to take a breath today and explain that to my child, and remember it all over again myself.

The cow pasture vest?  My mom, bless her, took in the shoulder line and added ties at the back to bring in the waist, and it was totally wearable.  It was never what I pictured it would be–probably because in my head I had a bustline that was two cup sizes smaller and a waist that was the size of a Barbie doll.  Somewhere between learning what flatters my figure and learning to push my skills with each garment (while allowing for imperfections and flubs along the way), I learned that every project we sew is an adventure and a chance to grow and get closer to making the dreams we dream.

And: that cow pasture prints never, ever belong on clothing.

Kitchen Sorta Update, Because What I Really Need Is Another Half-Finished Project