This quilt was made well over two years ago for a book proposal, but the project ended up not being included in Stitch Savvy.  When we moved into our new house, I re-discovered this piece, and I have fallen in love with it all over again.  And now that it’s February, month of the Valentine, what a perfect time to enjoy it! 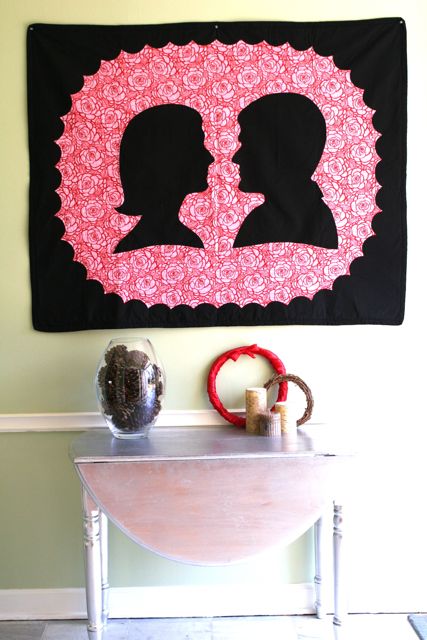 That’s me and my husband.  When I first brought this out and hung it on the empty wall in our entryway–where I’ve been rotating temporary displays seasonally over the past few months while we wait to find just the right piece of art to live there permanently–the two middle children, ages 4 and 6, saw it and thought it was the two of them.  At first, our boy said, “Whoa! That’s amazing!”  But apparently he and his siter had some ind of conversation while I was busy patting myself on the back for sewing things that are so impressive to the preschool set, because next I heard was, “I don’t like that.  I think you should take it down.”  I asked why, and was told, “Because we look like we want to kiss!”  I told both of them it wasn’t them (so egotistical!), it was Mommy and Daddy.  And our daughter says, “Eww!  It looks like you’re romancing!”

Love.  It is, in fact, a many-splendored thing. 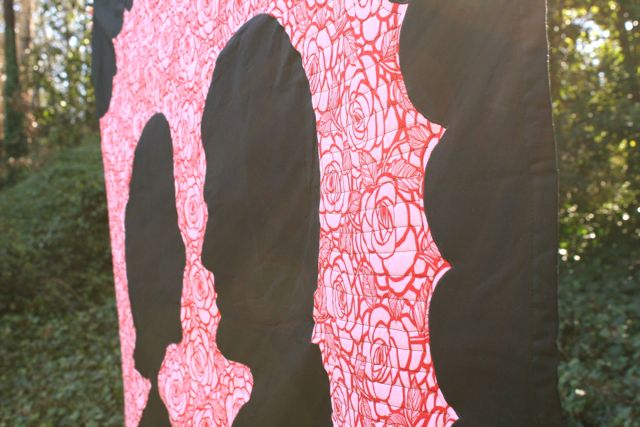 The entire wall hanging is quilted. It’s Kona black overlaid on an older Alexander Henry red-on-pink floral print.  The shapes were drawn on poster board with a pencil–I had my husband sit between a lamp with the shade off and the poster board, taped to the wall.  I traced his outline, then had him trace mine.  After a little cleaning up to make the lines smooth, I cut out the shapes and used them as templates to create silhouettes of our two profiles, facing one another.  Those were laid on the base fabric, then machine appliqued in place using a satin stitch. 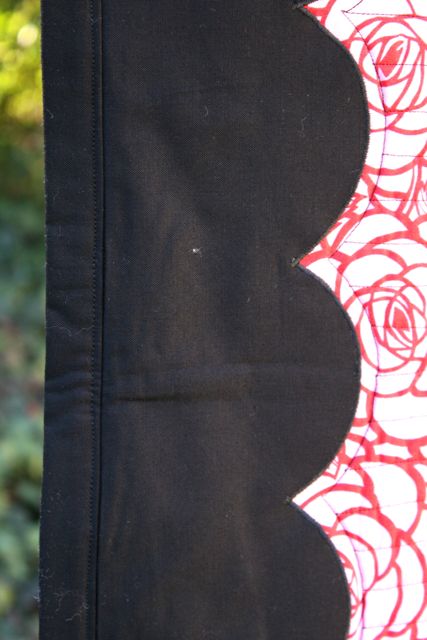 The outline was made in a similar way: I created a scallop shape on poster board, and used that as a template to trace out a large oval on the interior of a border, also made of Kona black.  The scalloped edges are machine appliqued with satin stitch, just like the faces. 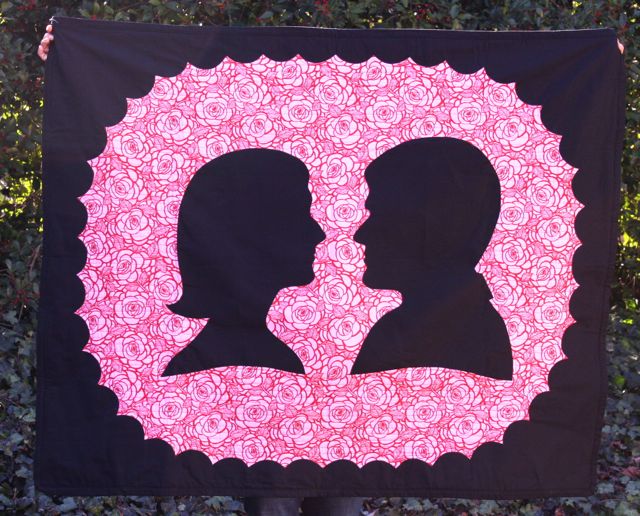 The appliqued rose fabric was treated like a quilt top, and placed over batting a solid piece of Kona black for backing.  I quilted an outline of each of the profiles, but where they face one another, I united them with an unbroken outline.  Symbolic, no?  Then, the entirety of the pink and red background was quilted with very closely-spaced–one inch–parallel lines from the edge of the applique to the edges of the outlined profiles. 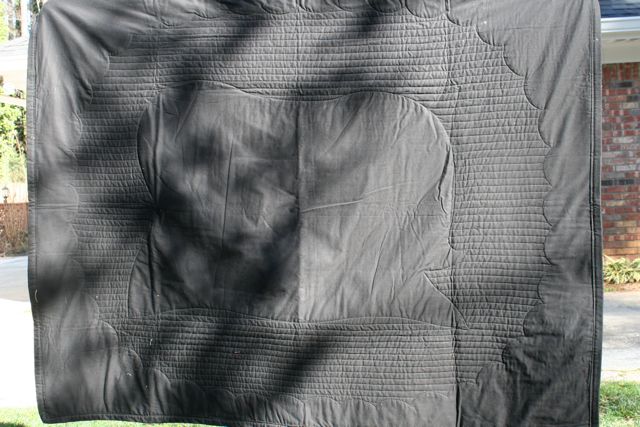 Despite pressing, the quilt back is still fairly rumpled from its time in storage; still, this shot gives you a better view of the quilting stitches.  The binding is more Kona black–I think it was after this project that I just bit down and bought myself an entire bolt of black to have for me and only me.  (My old fabric manufacturer rep told me once that Kona black is the best-selling fabric of ALL TIME, and I believe him.  Kona white and snow are close behind, he says.) 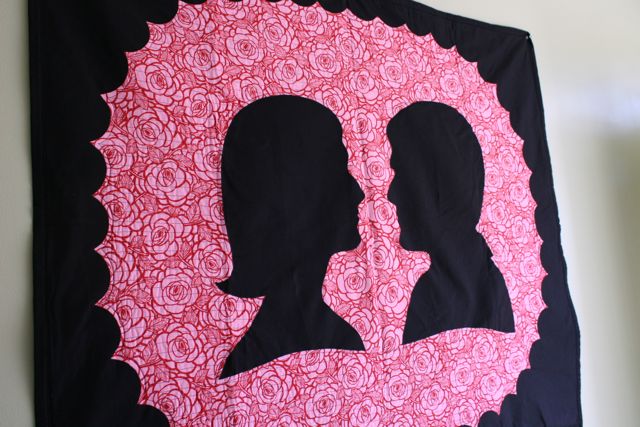 It wasn’t really my idea to hang it on the wall in the entryway.  My intern (loose term, since she’s the same age as me and isn’t getting any college credit) suggested it, since this piece is an odd size and shape: 44″ by 52″, so too small to really be a quilt, but not small enough to tuck into an inconspicuous corner.  The entryway wall is big and empty and screaming out for decoration, and from the instant we hung it up, I was in love.  Now, I had every suspicion that my husband wouldn’t be a big fan–I offered to let him take it to his office back when I first made it and he politely declined.  Go figure. 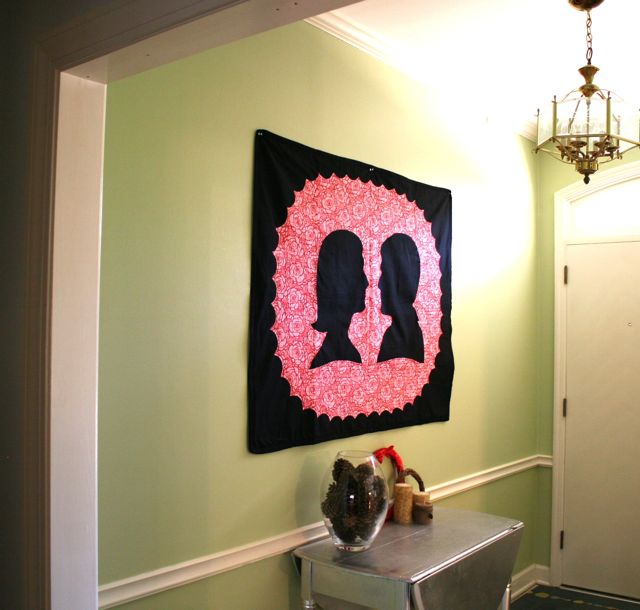 Every time I walk past it, though, day or night, it absolutely brings a smile to my face.  We look younger, for one thing.  No photo or portrait could ever do that.  And I love how classic the silhouette is, but how modern the Alex Henry fabric is, and the enormous scale of these heads makes the whole thing seem updated and edgy instead of staid and boring–in the same way that papercut silhouettes against bright, cheery fabrics seem updated compared to black-and-white ones with doilies behind them.

This wasn’t a quick-and-easy project, but it was worth the effort.  I love it so much more now than I even did when I conceived the idea and made it originally, and re-discovering it after nearly two years was a real treasure.  It was a lot of work then, but I think I’m more than reaping the rewards now.  We’ll keep this up in the entryway through Valentine’s Day, and I will never let my husband live down that he’s on fabric and we’re “romancing.” 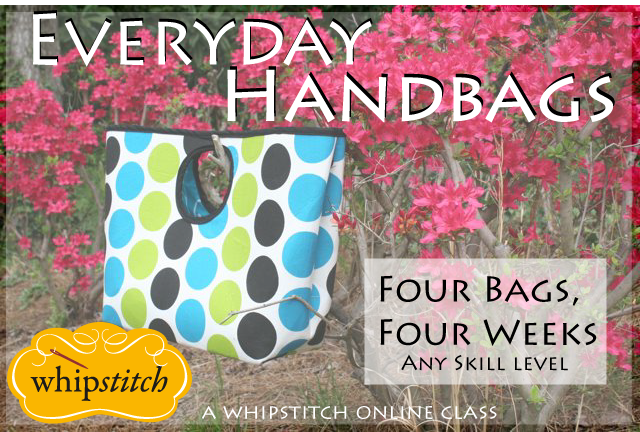 Stitch Identification, or What Does This One Do?