So, two things: first, I can’t find my back-up camera charger.  I bought it to replace my actual camera charger, which I had misplaced.  Eventually, the original charger showed back up, but then the spare went missing.  Then the spare showed up, but we packed to move.  So now, I have two chargers, but can’t find either, because apparently they’re in one of the two dozen boxes that we have not yet found time to unpack.  Which explains why these photos were taken with my phone.

Second, the Sewing with Kids series has been on semi-hiatus, ever since we sold our house and moved to the rental where we lived for six months before buying our current home.  But I am even now planning NEW Sewing with Kids lessons, to debut after Spring Break (which around here coincides with Easter Week this year).  Stay tuned!

And all that brings us to today’s project: I’m working on a school auction project this year for our son’s class.  I end up doing a lot of these each year, but most years in the past, I’ve primarily been in charge of securing the fabric for the project, and the other mommies have taken on the bulk of the actual work.  Which is awesome.  This year, though, we really (REALLY) love our son’s teacher, and have just learned that she’ll be leaving at the end of the year to move out of state, and I wanted to do something more for her and the class.  So I’m on point for the Glue Batik Wall Hanging they’re creating–it’s a 2-to-5-year-old class of 24 kids, all of them contributing to the quilt. 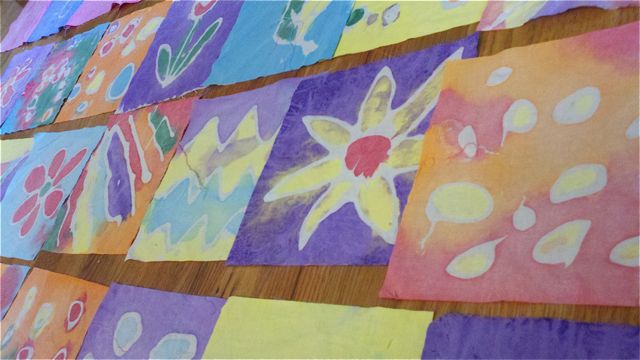 When she first came to me with the idea, our son’s teacher sent me this link, which she found through Ellen at The Long Thread.  I told her, “Actually, I know Ellen, like, IRL and stuff.”  I can’t be sure, but I think his teacher was suitably impressed.  The project is pretty simple, and involves tracing a shape in glue on fabric, then painting over it, and then washing out the glue to make a “batik” look.  Then the squares get sewn together into a wall hanging.  (Ellen is doing glue batik for her kids again this year, too, and has made the wise choice to limit the color palette–note that she points out the dyes dry lighter, so making them saturated makes for a bolder finished product.)

The biggest challenge, really, has just been the trimming. I haven’t traditionally been someone who always, always took the time and care to trim each block before I assemble the final quilt top, but a lot of these pieces had gotten skewed and un-square (is that a word?) as the children worked with them, so trimming was an absolute necessity.  Thankless work, but had to be done. 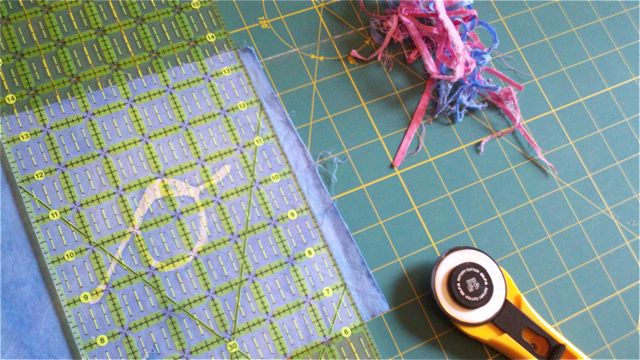 Right now, I’m at the sewing-together phase.  Bless his teacher and her two classroom assistants, they did all the glueing and dyeing without me being there, so all I have left is to assemble the final pieces.  I can tell you that our boy loooooved making his square, and will tell anyone within 60+ square miles which one he did, super proudly.  (Note: this photo is not his.  He’s three.  His is mostly blobs, but we still think it’s the best one there.) 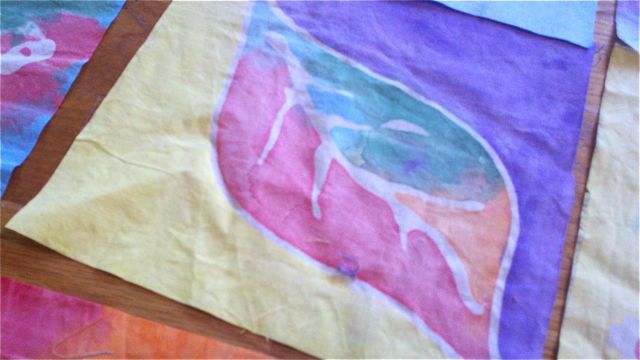 I’m off to find the perfect green fabric for the insets and border, and then we’re heading to the finish line, just in time.  Anyone else ever make one of these and have a suggestion for the best way to secure it?  I’m feeling like tying is the way to go, but want to be sure I choose something to really set off the work the children have done.