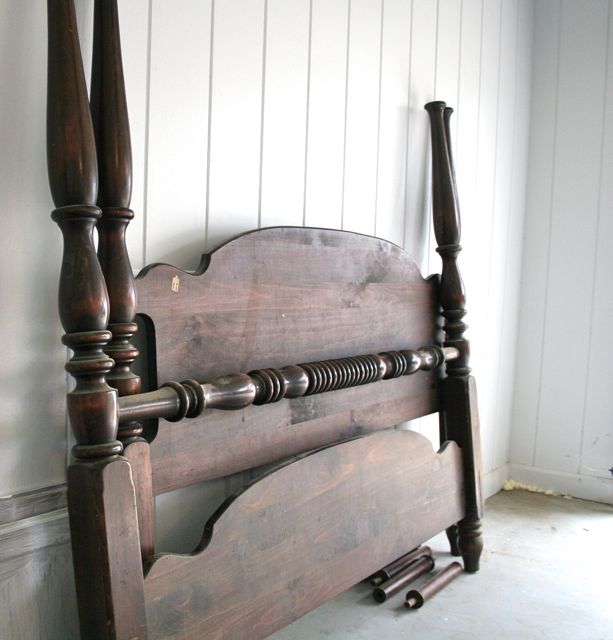 Not that I need *another* project going on right now, but I’ve begun the painting of the new bed for my oldest child: a wood four-poster canopy bed that’s going from worn and tired to HOT PINK.  After the success I had with the kitchen table, I feel bold enough to tackle this, even though I have yet to finish painting the kitchen cabinet doors (which isn’t entirely my fault–I still haven’t found the right hinges to use, and it’s killing me slowly).  The added incentive to get this project not just off the ground but completed is that she’s having two teeth pulled this week to make room for her braces to do what they’re meant to do, and I wanted her to have a nice big bed to recuperate.  I’m actually planning a stealth room makeover for her, partly out of love and devotion and partly because she’s 16 and I have very few chances left to quietly direct her on toward better taste. 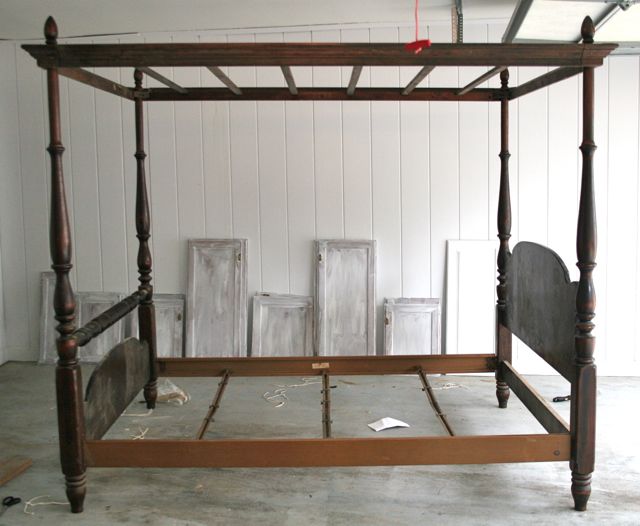 This bed was my parents’ when they were first married. I don’t think it has been fully assembled with the canopy top since at least my high school years, and it has been in storage for the past seven.  I set it up in the garage to make it easier to paint over the course of a few days, since I knew I wouldn’t be able to get into all those nooks and crannies with the pieces lying flat.  And yes, those are my cabinet doors, lined up behind the bed and half-finished.  That is how I roll. 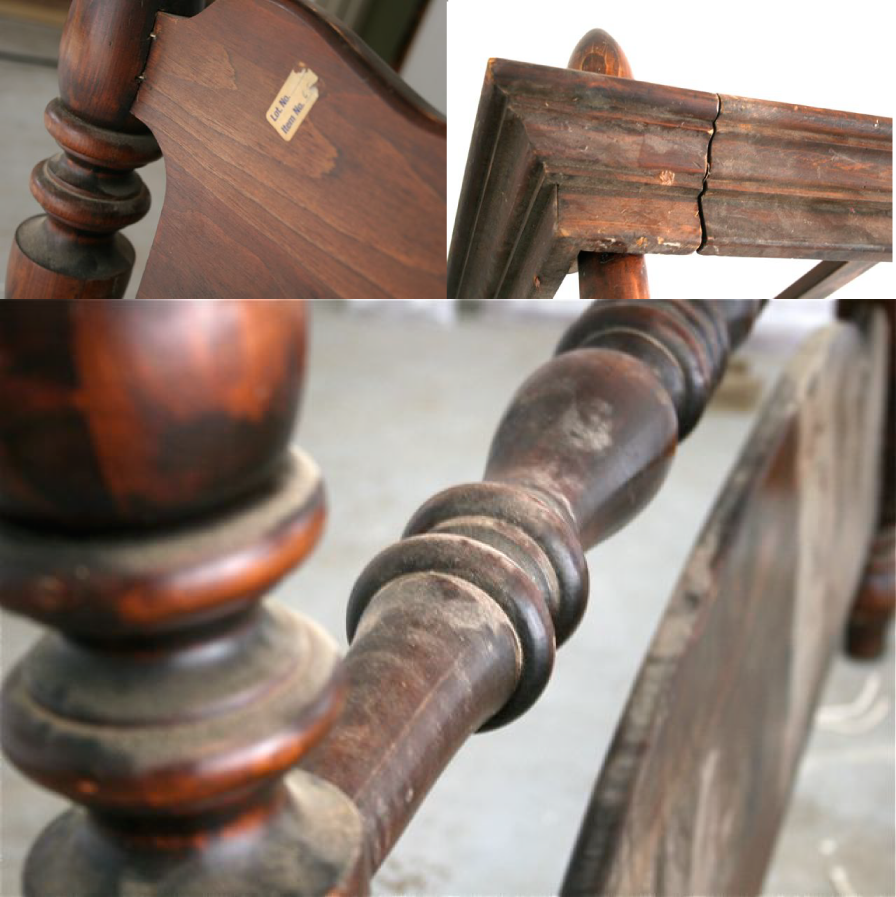 I wiped the whole thing down with a rag first, then followed with a de-glosser to remove the rest of the dust and dirt and nearly 40 years’ worth of fingerprints.  This poor bed has been through untold number of moves–including two continents–plus at least one flood, two attics, three basements and two garages.  It has tolerated jumping, babies, and abuse.  It really was time for it to shine as a new thing, and I was hoping that by cleaning it up and dressing it pretty, we’d find it has some life in it still.  After the de-glosser had a chance to dry, I hit the whole thing with a coat of primer. 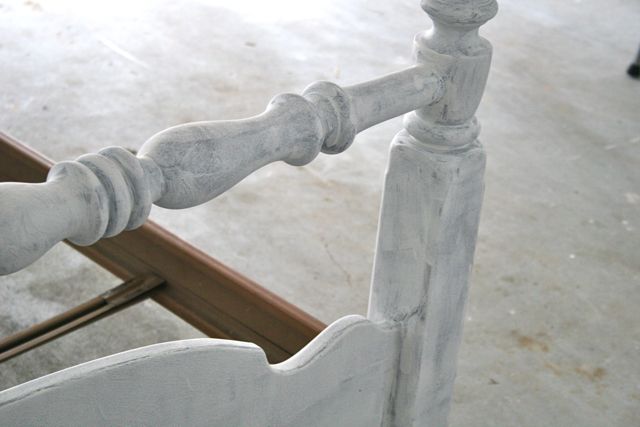 I have learned through painting our cabinets and our kitchen table that a foam roller gives a nice finish, but doesn’t put on near enough paint to cover a dark wood.  So on this project, I slapped the paint on with a brush, then followed it with a roller to smooth out the strokes.  Seems to work pretty well.  I didn’t do the roller with the glossy paint, just with the primer–for some reason, when I try the same trick with the paint, I get these itty bitty bubbles all over and I get an even poorer finish than with the brush alone.  But with a really smooth primer coat, the brush and gloss paint work just fine. 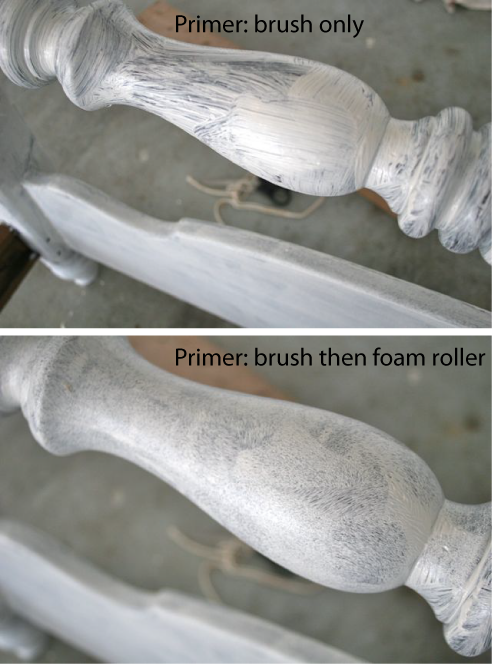 An hour(ish) for the primer to dry (I went and ran carpool while I was waiting), and then on went the paint: full gloss enamel in an electric raspberry that’s pretty close to the Pantone Color of the Year from 2011, Honeysuckle. 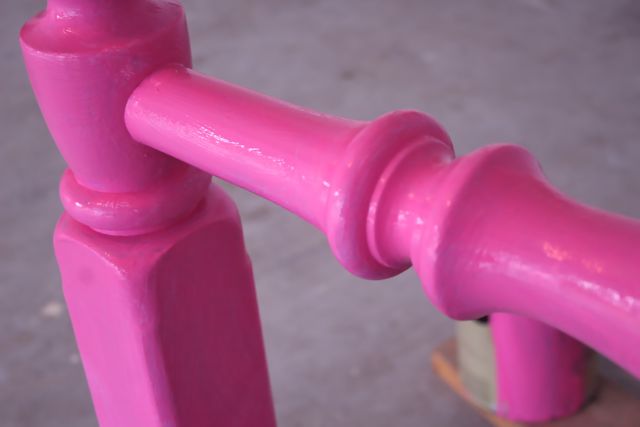 Her bedroom walls are a deep peacock blue, and she’ll get new crisp white sheets and a new dove grey duvet cover (plus a new slipcover for her armchair).  I’ll be rearranging some bookshelves, too, so that her room will have better flow.  Because in another two years, she’ll be on her own, and my job will be to say, “You do what you like, sweetie,” rather than, “Would you like to try it this way?”  This is my final act of heavy hand-holding.  Well, in the home decor department, anyway.  We still have the SAT and college admissions to get through! 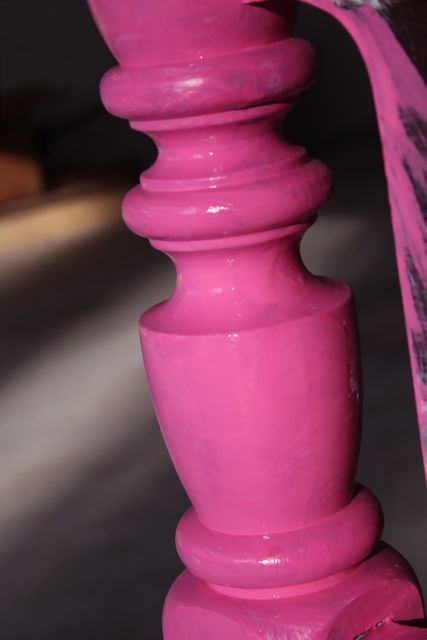 This is one coat of primer and one coat of paint, so we’ve still got a ways to go.  Plus, there’s disassembling it all and moving it into her room, along with the other pieces I’ve snagged for her–a great desk off of Craig’s List and a hand-me-down high boy chest of drawers from my mother-in-law.  Final reveal after two more coats, and the Extreme Room Make-over! 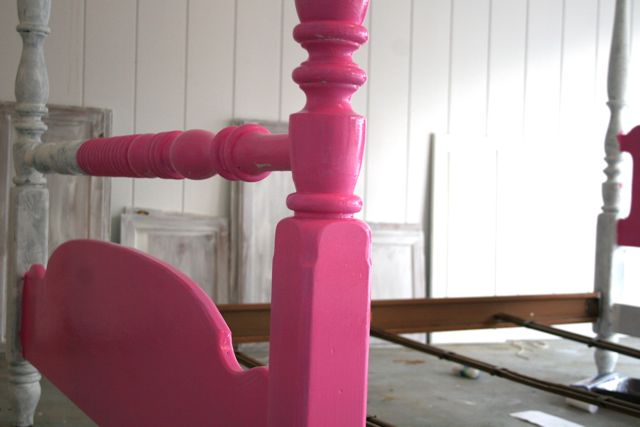 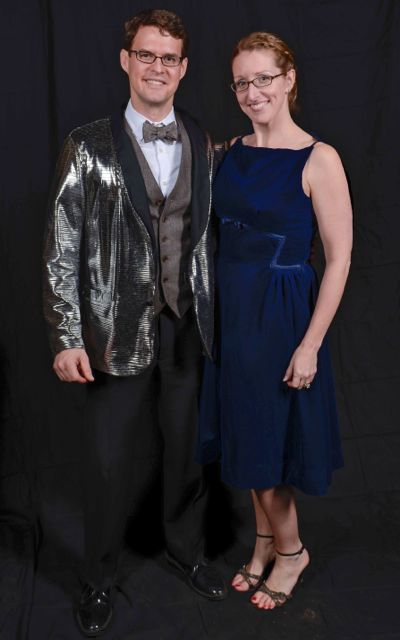 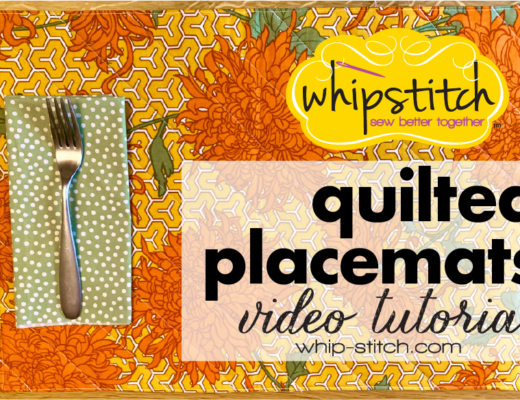 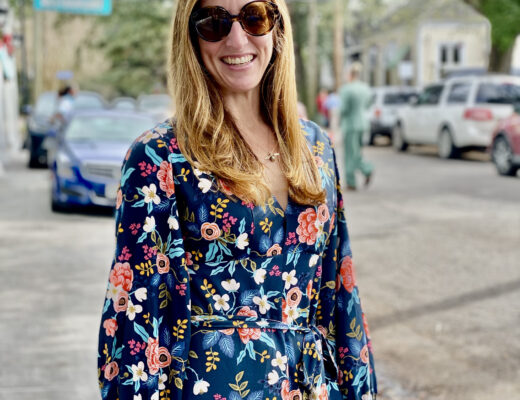