In the Ring: Rowenta vs the Gravity Feed Iron

For nearly ten years, I have used and strongly endorsed Rowenta irons.  They’re heavy, which is a good thing when you’re sewing and seeking to press rather than iron.  They have a steel sole plate, which heats quickly and evenly for good results on the fabric.  And they have a solid steam function that really shoots steam into your projects.

But in the past two or three years, Rowenta has really been leaving me cold, if you’ll pardon the pun.  The issue: leaks.  Oh, the LEAKS!!  I have absolutely had it with my leaking iron.  That water is HOT, y’all, so not only is it splashing and sputtering all over my project when it’s on the ironing board, but it’s dropping on my feet and scalding me.  My feet!  Unacceptable.

So a couple weeks ago, I’d finally had enough and decided to put the suggestions I’ve received to the test.  Instead of getting another Rowenta to replace my leaky iron, or even another brand of iron, I upgraded to the gravity feed iron, in hopes that I’d never have to carry a pitcher of water from my kitchen to refill my reservoir ever again.

Today, then, in the ring: the Rowenta versus the Gravity Feed Iron. 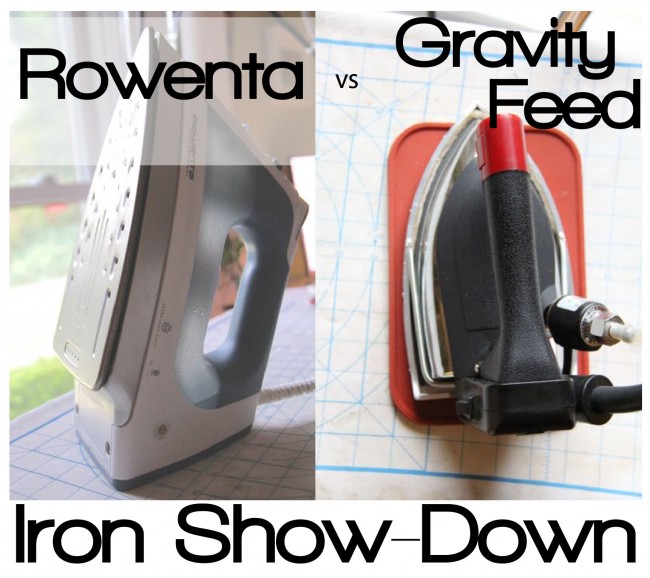 I have told my students for years, and wrote in Stitch By Stitch: sewing is 90% cutting and 60% ironing, so it’s basically -50% stitching.  Your stitching can be your weakest skill and you can still get good results if you cut well and press often.  As Kenneth King says, you can save bad sewing with good ironing, and ruin good sewing with bad ironing.  So a good iron is very, very high on my sewing supplies list.  I have happily used the best home-sewing iron I could find (the Rowenta), but this leak issue is the pits, and I’m not the only one complaining.  In an IG conversation, tons of friends complained, including Liesl Gibson, that their Rowentas leak–and Alexia Abegg chimed in and highly recommended a gravity feed iron as a solution. 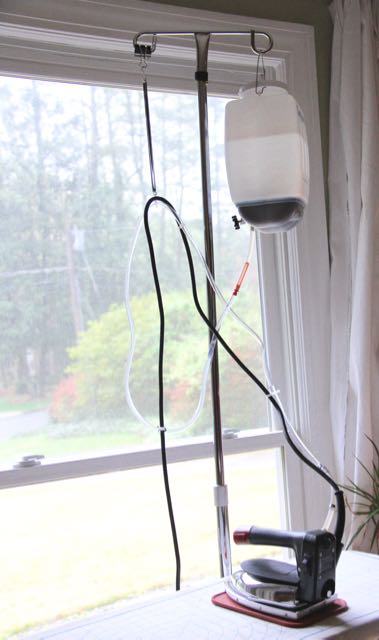 A gravity feed iron is what it sounds like: an iron that relies on gravity to carry the water from the reservoir to the steam chamber of the iron.  Your standard household iron, also called a steam-generator iron, has a reservoir inside the iron body, and steam is made immediately prior to being used on the fabric; the gravity feed iron carries water as needed from a two-gallon container through a series of tubing and super-heats it before your trigger releases it into the sewing. 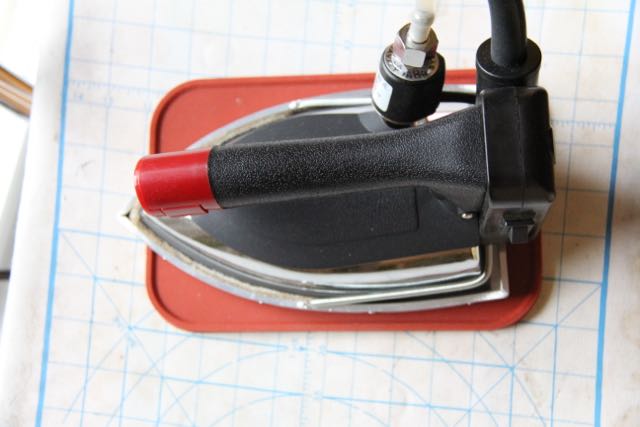 A review over on Threads Magazine points out that gravity feed irons are heavier–most are around 4 pounds–which does a good deal of the work for you.  And this article from Fashion Incubator points out that getting steam into your fabric is essential to get good results–although much of the article focuses on industrial irons for manufacturing, which isn’t want I’m looking to do, the information is really fascinating in a nerdy way.  Getting steam back out matters, too, which is why the article discusses commercial equipment; I don’t need anything nearly of that magnitude, but I do need an iron that will avoid leaving giant spots of water on my fabric which require time to dry before the fibers are really set into their new shape.  (See this article for pointers on properly ironing finished garments!) 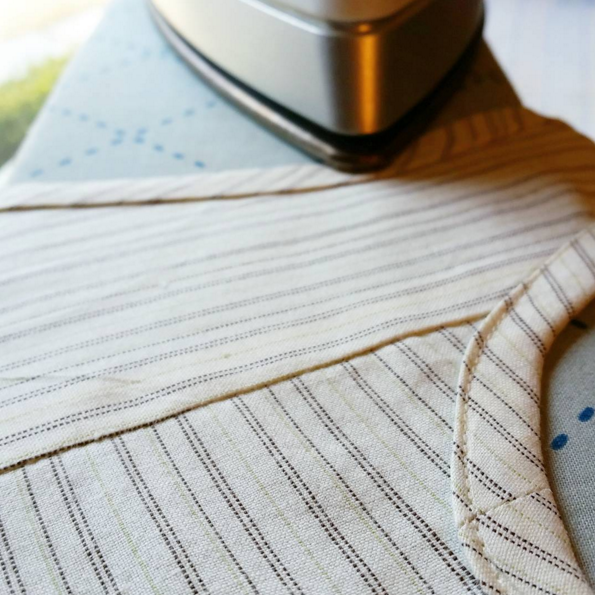 Because that’s what ironing is–or in the case of sewing, pressing.  We are shaping the fabric into what we want it to be in our finished garment (check out this PDF from the University of Kentucky Extension Service for LOADS of details on best practices for pressing in home sewing).  And in order to do that, we have to soften the fibers of which the fabric is made, using steam.  Getting steam into the fabric fast is the best way–way better than spraying with water and then heating with the iron, asking the heat to create the steam AFTER the water moistens the fabric.  So, when choosing an iron, we want one that will make the most steam in the least amount of time, and then deliver it right where we want it on the project.  Commercial presses use all kinds of vacuums and blowers and things to get the steam back out, but at the volume that I’m sewing, that’s not the issue I face–I am more concerned with getting steam IN but not wetting the fabric, because wet fabric is weaker and the shape isn’t set until the fabric is fully dry. 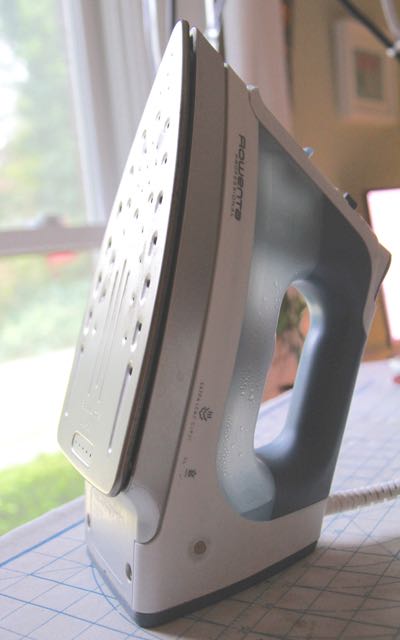 With a home iron, like my Rowenta, the steam is generated inside the body of the iron and then applied to the fabric.  I’ve always liked the Rowenta because it’s heavy for a home iron, much more so than the little “hotel room” irons you’ll see at the big box stores, so we’re already using gravity to our advantage.  I also like that most Rowentas have a fairly large reservoir, which decreases the amount of time I’m walking back and forth to fill the iron, or worse, ironing with no steam and wondering why I’m not getting better results. 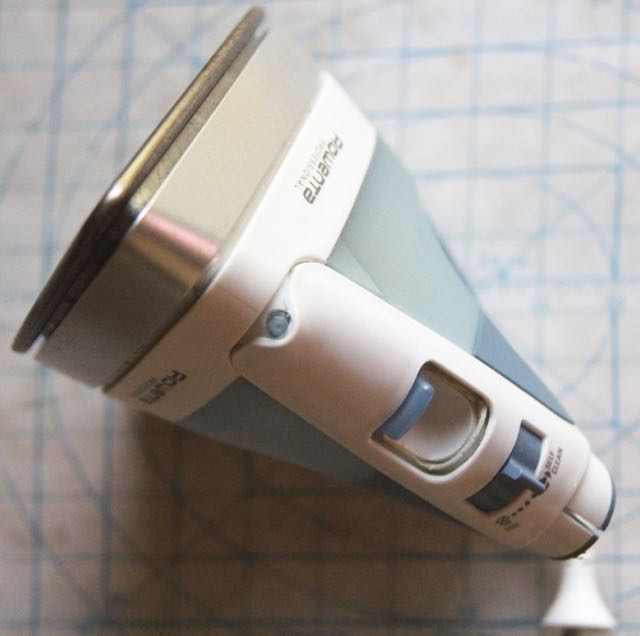 Quite honestly, this is a good enough iron that were it not for the leak issue, I wouldn’t be looking for a replacement.  It has steam holes but not too many–I’m not worried about how much steam so much as getting it in the right places quickly–and a stainless steel sole plate–Teflon-coated plates can scratch and send dangerous particles into the air, and are designed to keep the plate from sticking when using heavy starch, which I don’t do frequently enough to make it relevant to me.

But the leaking is absolutely unacceptable–bordering on unconscionable.  The water should stay IN THE IRON, not pour out onto the ironing board, as in this photo from Instagram: 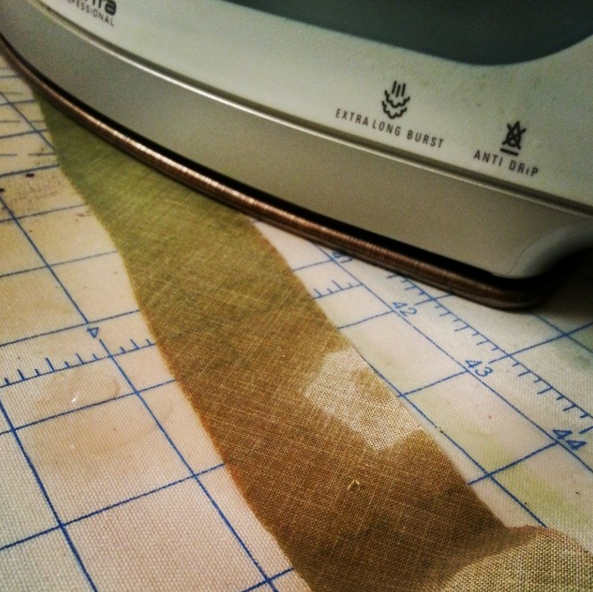 See how wet my bias tape is?  If I’m working with fabric that’s extra stretchy anyway, and then make it wet, which makes it weaker but doesn’t set the shape, ugh.  Not cool, Rowenta. 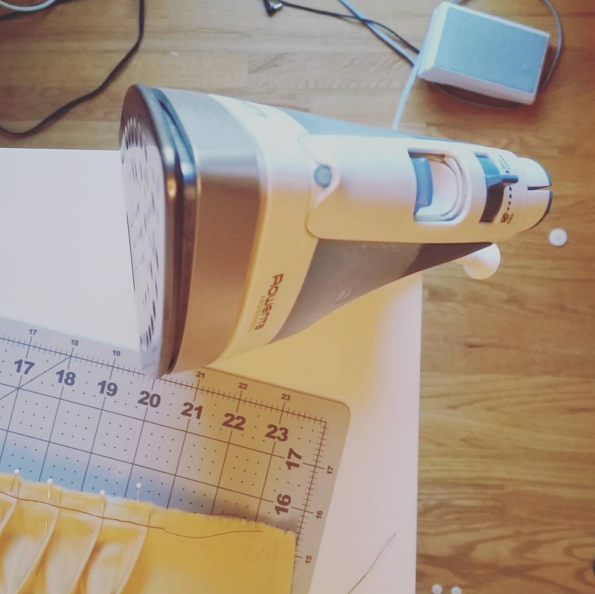 This iron is somewhere between 3 and 5 years old, and has been leaking (according to my IG feed) for at least 3 of those years.  The water escapes as bubbling scalding drips along the seam between the body of the iron and the sole plate.  I’ve heard rumors of people repairing these with some heat-resistant industrial glue along the line where the leak occurs, but I was looking for a more permanent solution, one that was reliable.

When I looked into the gravity feed, I was concerned that it would be prohibitively expensive.  I learned that it was almost exactly the same cost as another Rowenta, maybe a little less depending on the model of Rowenta I selected.  I still had some of the same concerns as Peter over at Male Pattern Boldness, namely that this style of iron seems to take up a lot of space and how do I even know that it’s going to last as long?  There are totally models that are more expensive than the one I was looking at–the Sapporo–such as the Naomoto, which comes very highly regarded.  Was I making a mistake by considering a less-expensive model, and was this just a more cumbersome version of the Rowenta I already wanted to replace?

I sprang for it.  At right around $100, and considering I own no fewer than SIX irons that have all quit on me and each cost close to or more than that much, I figured gambling on this one was certainly no more risky than getting another iron like the ones I already have and seeing a leak appear in that one, too.  Along with the Sapporo, and using the “others who bought this item also purchased” feature on Amazon, I ordered an IV-pole to hold the 2+ gallon reservoir, and the filter substrate that’s required to keep the water clean when passing through the iron (and to preventing voiding the warranty). 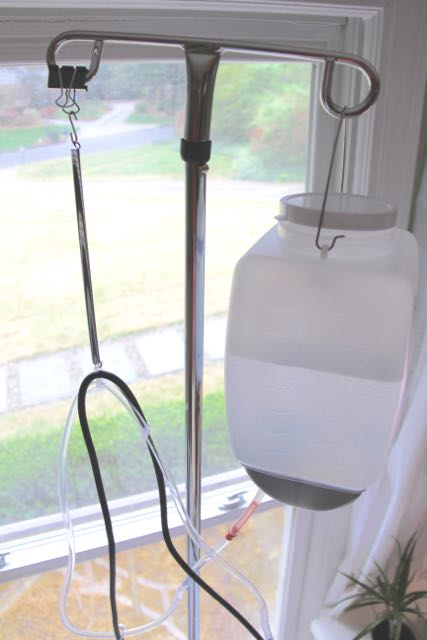 It is, perhaps, not beautiful.  My eldest came in the room and asked, “Uh, what, are you doing surgery in here??”  But since I am working in our dining room (where I do most of my sewing, as opposed to my studio space, where I shoot video but don’t really do much construction), and hope one day to move to the basement and have a dining table in the dining room, I was hesitant to plug a giant hook into the ceiling.  It seems sooooo permanent. 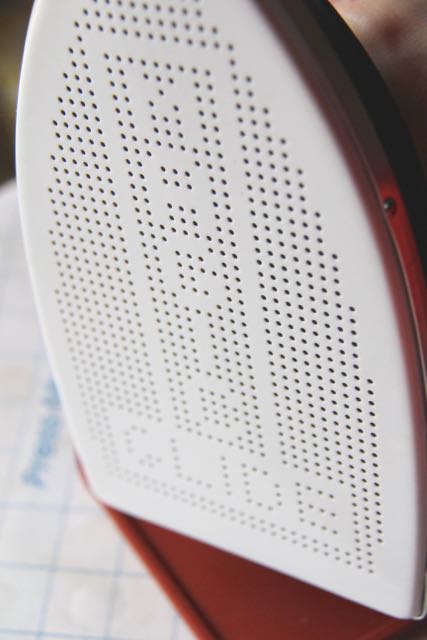 The Sapporo came with a Teflon sole-plate–not one spray-coated, but actually molded of Teflon.  It glides crazy smoothly, and means that no matter what fiber I’m working with, I don’t scorch my fabric, even when the iron has been on for hours, which it often is.  It heats up SUPER quickly, stays VERY hot, and has a small face, all of which are huge pluses.  In fact, that last–that it has a smaller profile and footprint–is way more impactful than I would have suspected, and makes an enormous difference in pressing pleats, gathers, waistbands, and details.  The weight of the iron plus the speed with which I get high-heat steam means that I do way fewer passes over garments to get superior results over the Rowenta. 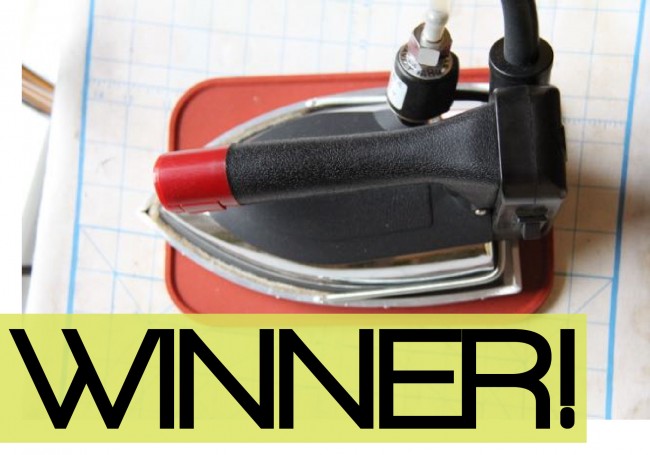 After a week of working with this iron on cottons, linens, seersucker, bias tape, hems, necklines, sleeves, cuffs, and linings, I can honestly say that my feelings for this iron border on unnatural.  I would hold hands with it if it didn’t get so hot.  I want to be BFFs with it forever, and would escalate our friendship to More Than Friends were I not already very happily married.  There are no leaks, no scorching, no drips and flawless results.  It takes less time and less effort to get better results than ever with my old iron, and all for about the same expense.  This is vastly less portable–you can never really take this iron anywhere with you outside your home–but since I rarely travel anywhere that I need an iron, and have a (decent but cheap) iron at the studio, portability isn’t really an issue for me.

Am I saying that everyone should run out and get a gravity feed?  Not even remotely.  I use my iron every single day for hours at a time–anyone who isn’t sewing at that volume really doesn’t need to take up the space that a gravity feed requires.  But if you’re doing a lot of sewing, have a place to keep this where it won’t be an eyesore or need to be dismantle and stored each time you sew, and were planning to spend in the $100 range on a new iron anyway, then I can’t recommend it highly enough.  The improvement over what I was using before is night and day.

What iron are you using?  Are you happy?  I’d love to hear about your experiences and compare them to my own! 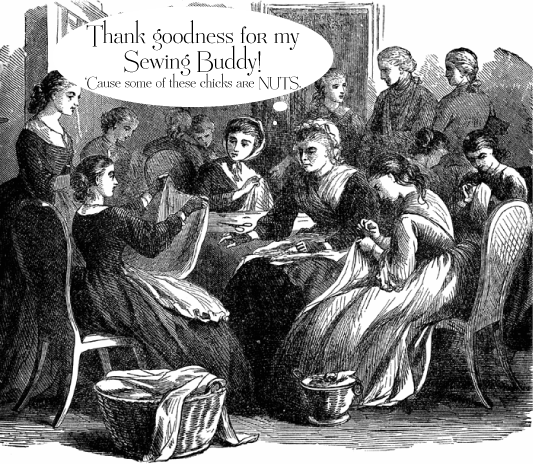