On the first night of Intro to Sewing class, a young woman walked in with a brand-new sewing machine still in the original box and set it on the classroom table.  This was certainly not the first time that a student had arrived with their first sewing machine to their first sewing class, by any stretch–on a regular basis, someone would come to class direct from the checkout line at the big box store and set their shiny purchase in front of their chair.  Invariably, their faces wore a look of embarrassment, as if they should have had more experience sewing before coming to class.

I believe very strongly that learning of any kind, and certainly learning a craft, should be a happy, warm, welcoming experience.  So when this woman–a girl, really, because she couldn’t have been much older than 20–arrived to join our group, looking self-conscious about her brand-new machine, I said, “No worries!  Gotta start somewhere!  Let’s get you all plugged in and you’ll be good to go.” 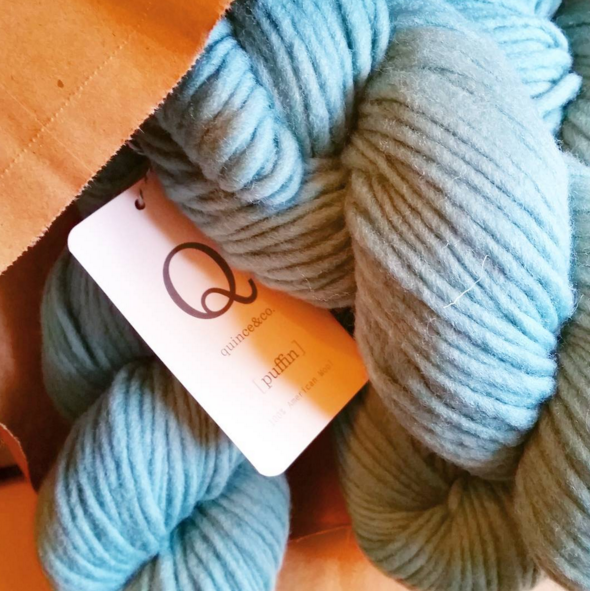 When I was writing Stitch By Stitch, I was really writing for that girl, who didn’t know that sewing machines plug in.  I was writing for every student who had ever been chastised or humiliated or made self-conscious by a teacher.  I was writing for the people who had been made to feel small or uncoordinated or clueless because they didn’t understand the basics of sewing.  We should be EXCITED to sew, we should feel DRAWN to it.  And no one ever got excited about being shamed.

We don’t often get to go back to the beginning and remember what it feels like to really, truly be starting from scratch.  I’m here to say: if you get the chance to try something new, something REALLY new, it will humble you.  It will pop the balloon of your own self-satisfaction.  It will remind you that we are all starting somewhere, and that the joy is not in perfecting but in progressing.  And you’ll be better for it.

This is the story of how I got to do that. 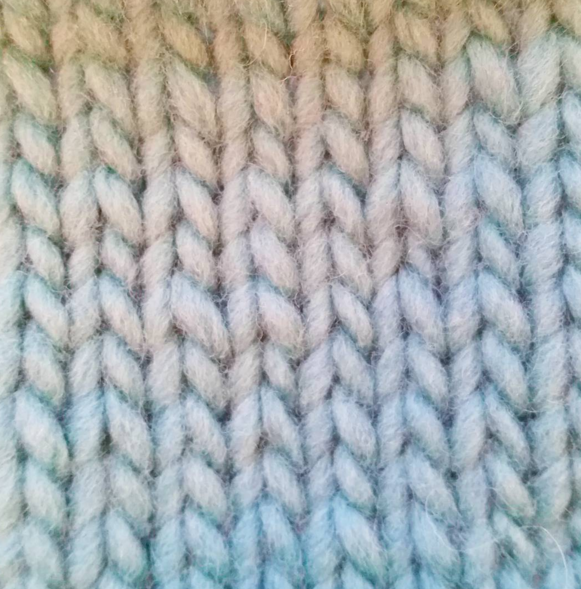 This month, I decided to join the #havefancyhouse knit-along on Instagram, hosted by Lizzy House, Jaime Jennings of Fancy Tiger Crafts and Marlee Grace of Have Company.  We’re spending the month of February knitting the Agnes Sweater by Melissa LeBarre in Puffin yarn by Quince & Co.  Now, I have knitted more than my share of dish cloths, and I have done a few scarves.  I have a vague memory of starting a hat back in graduate school, but I didn’t know there was such a thing as double-pointed needles, so I didn’t understand how to finish it.  I’m sure it got donated, unfinished, to a Goodwill somewhere along the way.

Point being, I feel very comfortable with the knit stitch, and I purl like a champion.  But that’s it.  I don’t know fancy stitches, I can’t really read a knitting pattern, I don’t know what all those abbreviations are for, and I had no idea there were little rubber doohickies you could put on the ends of your needles to keep the stitches from falling off (that would have been super, super helpful to know).  I have bought (pretty expensive) yarn for six sweaters, had it balled (by a friend doing a favor and giving up part of her day because I swore, swore, swore I was going to knit cardigans with all of it), and have it sitting in a (very attractive woven recycled paper) basket in the corner of my sewing room.  And I have been far too intimidated to actually begin anything. 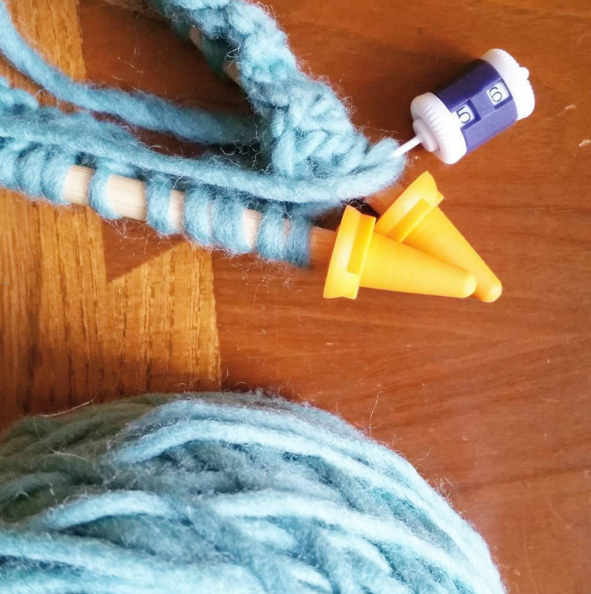 I think I have been worried I’d fail, of course, the fear that keeps so many of us from taking the leap and trying new things.  But more than that, I intensely dislike wasted time.  And if I didn’t come out of the exercise with a completed sweater, it would be demoralizing and disappointing and depressing.  Which has made it super hard to even begin.

When this knit-along came about, I jumped, before I could over-think it.  It appeared to be a classic, cozy design; people I genuinely love are leading us along the way; I’d be in the pool with a bunch of other folks who’ve never knitted a sweater before; and we’re all taking progress pics, so I can see if my sweater-to-date resembles what it’s supposed to look like.  And plus I knew that once I publicly committed I’d be far less likely to back down–not publicly because I put it on Instagram, but because I know and like the ladies leading the knit-along, and didn’t want to let THEM down.  It’s not about telling everyone I’m trying something new, it’s about telling SOMEONE I’m trying something new, someone who will be invested in seeing me progress. 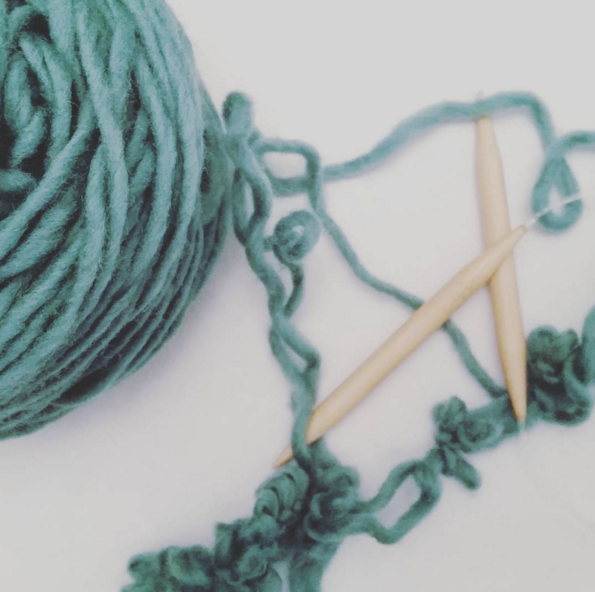 Did it all go smoothly, right from the beginning?  No.  Did I cast on SIX SEPARATE TIMES because I kept forgetting how to do the cast-on stitch called for in the pattern?  Yep.  Did I very nearly cry when I realized I’d made a bungle and didn’t know how to fix it, and would have to pull it all out?  Yep.  Did I have to cast on TWO MORE TIMES to get it right?  Sure did.

And you know what else?  When I got to the end of the next step and counted my stitches, THEY WERE EXACTLY RIGHT.  And I ’bout near peed my pants, I was so excited.  What a rush!  Isn’t that INSANE??  That making little loops of yarn with two sticks would make me feel as though I could conquer the world??  And yet. 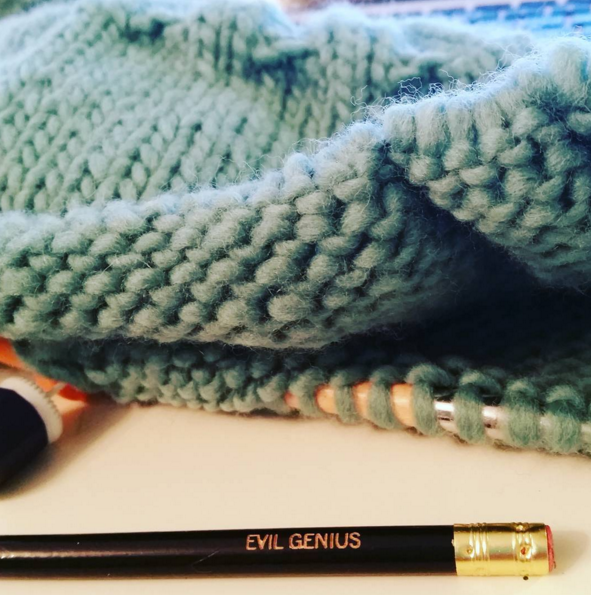 It was also very, very humbling.  One of my greatest beefs with a lot of sewing instruction is the stuff they leave out–the things that people who have been sewing for a long time forget that they didn’t know before.  It can be so frustrating for a novice seamstress to see an instruction like: “Step 38, install zipper.”  It doesn’t just slow or halt your progress, it hurts your feelings, it makes you feel inadequate or somehow lacking because you can’t figure out what to do next.

And I felt like that again with this project.  I felt clumsy and uncertain and uneducated.  I felt out of my depth and was filled with self-doubt.  Really?  About knitting a sweater?  Yes.  Because small children do this all over the world, and I am REALLY STRUGGLING HERE.  It was such a good, good reminder of what it is to be a learner, and what it feels like to WANT to be able to do something so badly, but labor to get the cogs and wheels to align.

With the SuperBowl in the background, as I cast on for the eighth (and final, as it would turn out) time, my husband asked, “Why do you want to do this so badly?”

I had to think about it, had to get out from behind the intensity of my frustration and determine what was driving me on.  “Because I want to know that I CAN,” is what I told him.  The pleasure and contentment and satisfaction of making something with our own two hands is a soothing wave, and working from the beginning again was humbling, humbling, humbling.  Getting to that moment where, at least so far, everything has fallen into place (fingers crossed!), gives me a sense of order and security in a wild, off-the-rails world.  I can only imagine what it will feel like to hold the finished sweater in my hands.

I’ll let you know how it goes.

Brother and Sister Outfits for Easter (and Beyond) 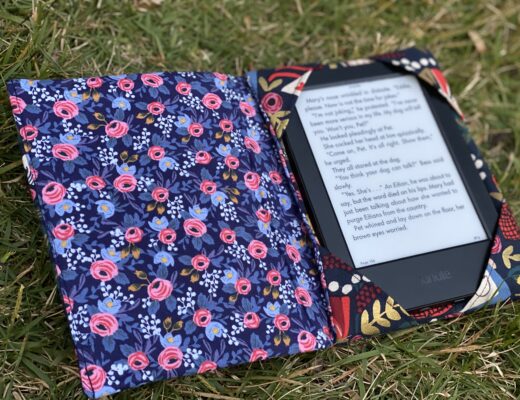