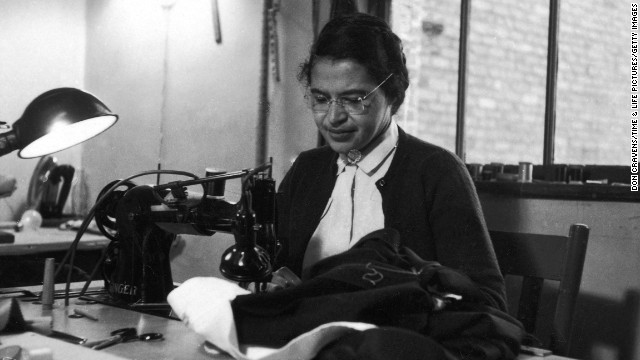 I grew up in Montgomery, Alabama.  The earliest school memories I have celebrated the Montgomery Bus Boycott, the March from Selma, and the Civil Rights movement in a very personal and immediate way.  We drove past the sites of these historic events on a daily basis, and it was an ever-present part of my childhood–both the vestiges of racial tension and the legacy of the changes in our social fabric wrought by Civil Rights leaders short decades before I was born.

In all those years living at the heart of the struggle for Civil Rights, I never knew that Rosa Parks was a seamstress.  Quite frankly, I’m not sure I had a coherent thought about what she did outside of her famous protest on the bus that day.  Parks worked at a Montgomery department store as an in-house seamstress, tailoring and fitting garments for the city’s white residents.  Her hours were long and the work could be humbling for the educated and highly-literate Parks, who was taught to read and write at an early age by her mother and did well academically despite a school career that included elementary grades in a one-room schoolhouse in tiny Pine Level, Alabama and secondary grades at a segregated school for girls in Montgomery.  From early on, Parks often lacked essential supplies like books and desks, but did well in her classes and eventually attended a laboratory school (similar to a modern-day charter program) for secondary education led by the Alabama State Teachers College.  She was forced to leave the program in her junior year to tend to her ailing grandmother and never returned.  Instead, she accepted a job as a seamstress in a shirt factory, and sewing became her daily life.  She eventually earned her high school diploma, with the support of her husband, at the age of 20. 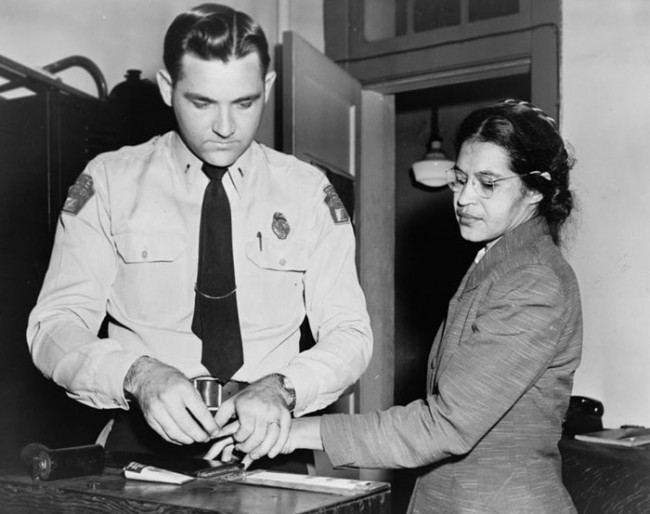 My schooling taught me that Rosa Parks made the decision on that day in December of 1955 to stay in her seat on that Montgomery bus, refusing to give it up to a white passenger, on the spur of the moment.  Recent articles indicate that this isn’t the case, and a visit our family took to the Center for Civil and Human Rights* since it opened here in Atlanta provides a different view of the events that winter’s day.  Parks was an member of the NAACP, joining as early as 1943, and working with the organization toward equal rights for black Americans throughout the second world war, and serving both as youth leader and as secretary to the NAACP president until 1957. 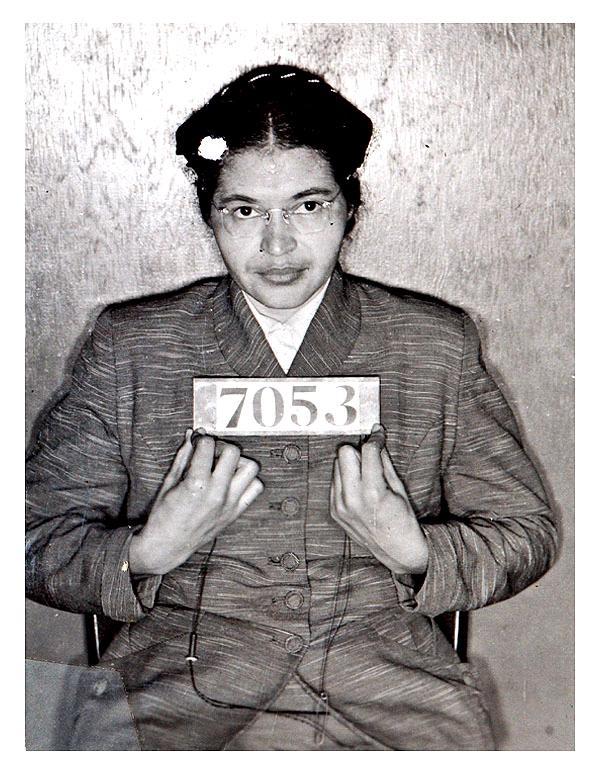 As a result of her respected place in Montgomery’s civil rights community, according to displays at the Center for Civil and Human Rights, Parks knew the local NAACP was in search of an individual who would first make a stand against the City of Montgomery’s bus laws, which permitted bus drivers to assign seats as they chose, a practice that had been interpreted by most of the bus drivers to mean they could require a black passenger to surrender their seat to a white passenger when other seats were full, regardless of whether those seats were in the colored section of the bus.  Another woman, Claudette Colvin, had refused to give up her seat in March of the same year, but when the issue became a legal matter following Colvin’s arrest for disturbing the peace, violating the segregation law and resisting arrest, Colvin reports that her mother told her to “let Rosa be the one, white people aren’t going to bother Rosa [because] they like her.” 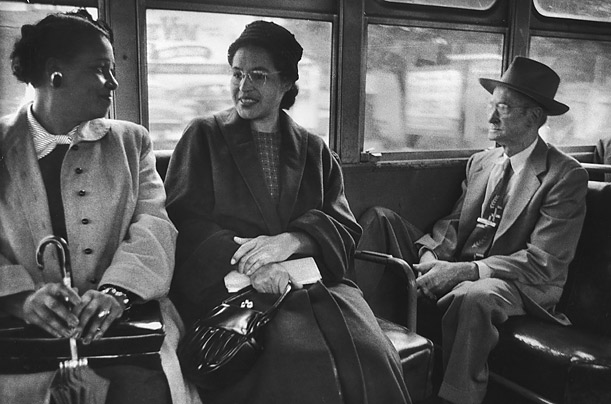 As a hard-working seamstress, Rosa Parks must have been privy to intimate moments with the white community in Montgomery.  I have to go off-book here, because there isn’t much information on this part of the story, but imagine what you have experienced if you’ve taken a dress in for alterations or shopped with friends: the sales staff and alterations lady are there, pinning away or organizing your shopping, but they are largely invisible to you and your girlfriends.  Your conversation continues in the presence of these service providers, who take care of their work but stay out of the discussion.  How much must Rosa have seen?  And how familiar must she have felt to the white customers at the department store, who saw her again and again and trusted her skill with the needle to have them looking their best?  When Claudette Colvin’s mother says that the white citizens of Montgomery liked Rosa Parks, it was likely because the knew her personally through her work as a seamstress, and as a peaceful activist with the NCAAP.

Rosa Parks didn’t sit on the bus, launch the Montgomery bus boycott–which lasted many months and finally forced the city to change the bus segregation laws in December of 1956–and galvanize Civil Rights activists because her feet were tired after a long day.  While she did not take her seat with the plan of refusing to give it up, when she made the decision not to move, she did so with foresight, thoughtfulness, and intent.  She did so after hours of labor at her sewing machine, and with full knowledge that she might lose her job as seamstress at that department store–which, in fact, she did following her arrest, not to mention receiving months of threatening phone calls and harassment.  Her actions weren’t accidental.  They were a response to years of being the witness to injustice, and they changed the entire nation’s attitude toward our black citizens.  As Parks said herself, “I had no idea that history was being made.  I was just tired of giving up…I would like to be remembered as a person who wanted to be free, so other people could be free.” 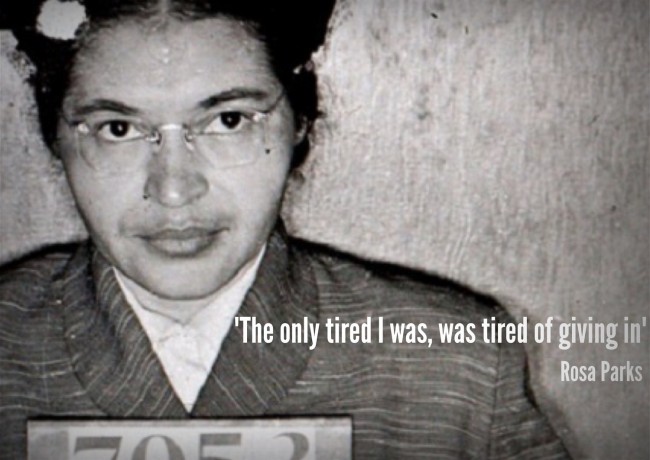 As I think about the Great Women of Sewing, I want to remember that when we sew, we are connected in myriad ways to the communities around us.  We are connected to those we love, who live in our homes with us, as we sew to offer them gifts and memories from under our needle.  We are connected to our history, distant and near, to those who have used their own needle and thread to make something from nothing, to create culture and family.  And we are connected to others whose lives we may never intersect, and on whom we can have enormous impact if only we are willing to take a step.

Thank you to Rosa Parks, a Great Woman of Sewing.

*The National Center for Human and Civil Rights, which opened in Atlanta in 2015, is easily one of the best museums I have ever had the opportunity to visit.  I cannot recommend it highly enough–to the point that if you find yourself in Atlanta and have time to see only one thing, I would tell you to head right there and see every inch you can.  It is exceedingly well-designed, well-presented, and globally relevant. 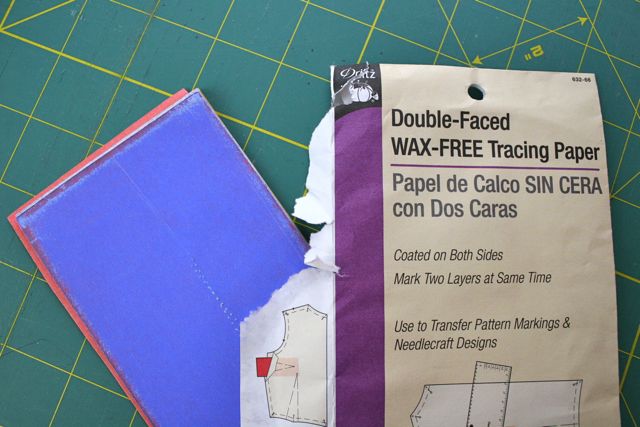 NEW! Sale from the Fabulous Jen at MOMSPatterns