Adventures at the Atlanta Food and Craft Swap 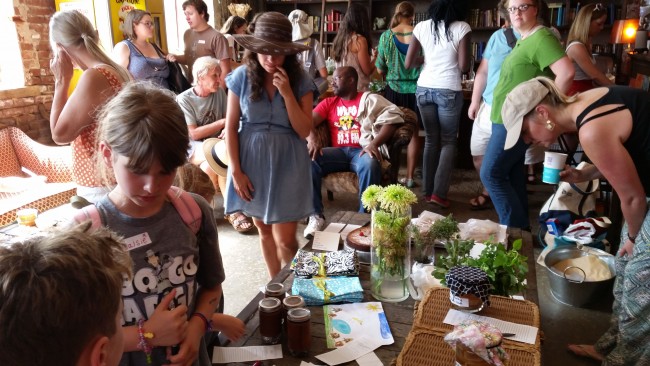 This past weekend, we ventured out to an event we’ve never attended before: the Atlanta Food (and Craft) Swap.  Hosted by Homestead Atlanta, this is usually “just” a food swap, but this month, they opened it up to anything handmade–and we jumped on it.  I sent my husband the details and we set aside an hour-ish on our Sunday afternoon to head over to the Goat Farm (I think the venue might have helped convince him–he figured he’d get to see the swap and check out Walking Dead sets at the same time). 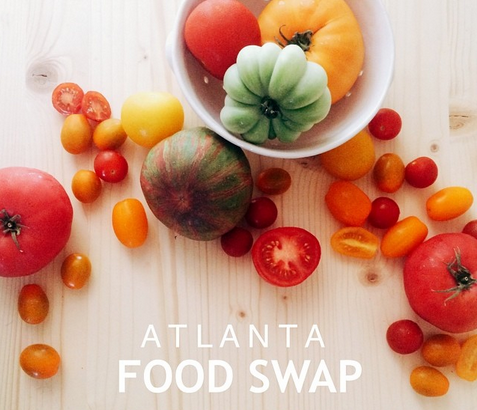 Since I’d already been making a zillion napkins, it wasn’t too big a leap to make more.  And everyone needs cloth napkins, right?  I buckled down for two hours Sunday after lunch and made four sets of four napkins to swap.  I assumed some folks would bring more items to trade, but the invitation indicated that other folks just come and watch and visit, so four seemed like a good starting point–and all I honestly had time to put together before we headed out. 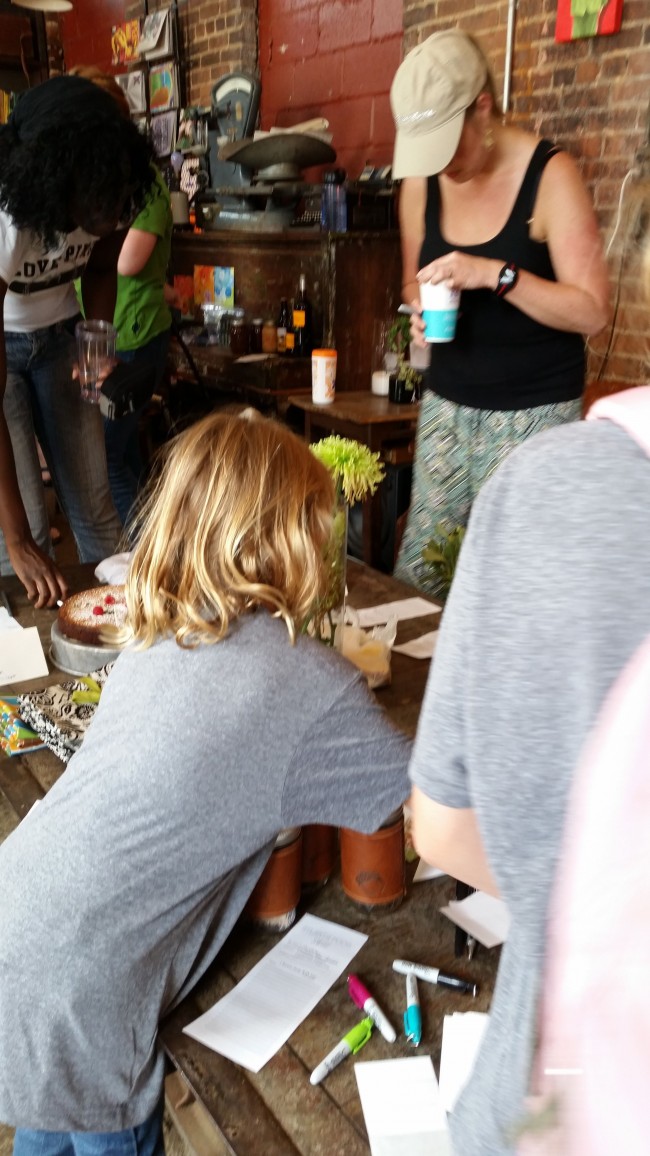 On the way out the door, the two youngest children got very excited when they learned where we were headed.  They both ran to grab pieces of their art they had made to swap with others.

And I had one of those Mom Moments.  Where you say, “Um….you guys?”  Because I was thinking, who’s going to swap for their drawings?  What if no one wants them?  What if the folks there are offended or irritated that these small children have brought their marker drawings to this event?

And then I had another Mom Moment.  Where I realized that I was thinking of their drawings as “art” and not art, and quite honestly belittling their abilities.  So what if no one wants their drawings?  It’s awesome that the kids think highly enough of themselves to WANT to take their art–and to think it’s worthy.  Isn’t that something to be proud of?  So what if one of the people at this event is offended or irritated?  What a great way to learn that these are not Our People, because someone who frowns or sneers at a five- or six-year-old child who proudly and enthusiastically wants to trade their art for who-knows-what is not cool enough to hang with my incredible children.  So there. 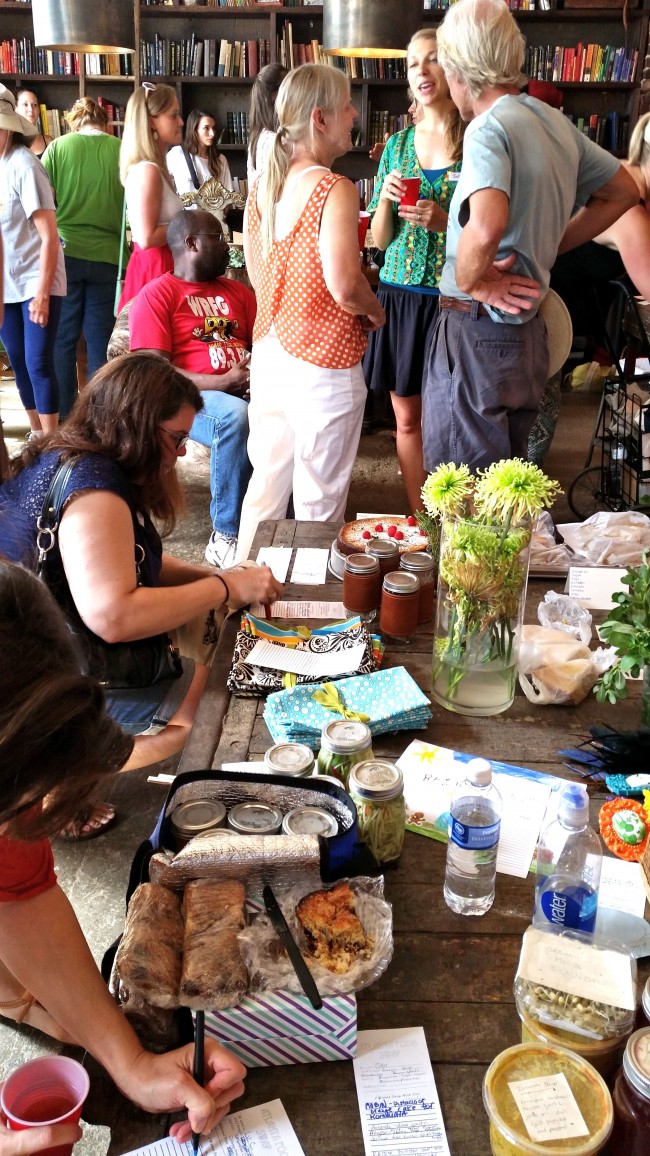 So I stuffed my protests down into my throat and cheered them on.  Good for them, I thought.  That’s right: what you make with your two hands IS good enough, and valuable enough, and worthy enough for you to think that another person who isn’t your parent would treasure it.  Let’s take that palm-sized Bic pen drawing of an elephant on light blue construction paper and swap it out.  You bring along your smelly marker drawing of “outside” complete with sparkly puppy stickers and see who’d like to have it for their own.  Let’s make that happen.  We loaded up a big basket with my napkins, all tied in selvedges, and their art and hit the road. 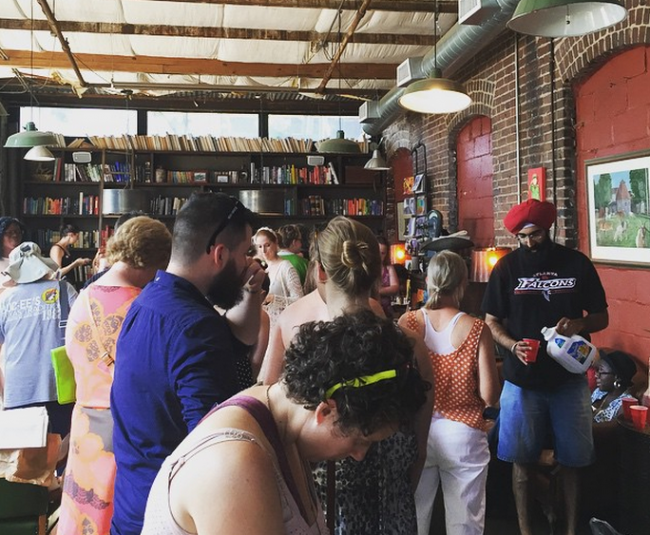 And everyone was absolutely lovely.  We filled out slips of paper with our names and what we’d brought, even the kids, who clearly considered themselves equals to every other swapper there.  We met some super nice folks who were all curious and excited about everyone else’s goods.  We walked around and added our names to slip for items we’d like to swap for, to make the process easier.  And we watched.  Honestly, we all watched the kids’ slips–will anyone put their name down?  Does anyone want to trade for their art?

Our son’s slip got the first name, from a woman with decoupaged coasters.  He was elated–and so was I.  I let out a breath I hadn’t realized I was holding, nervous that we’d have to walk through what rejection feels like on his first time out.  A few folks put their names down for my napkins, and we all watched our youngest child’s slip, which remained empty for an eternity.

Finally!  We peeked and she had TWO offers to swap for her drawing.  TWO!  One for some cookies and another for some gooey amazing granola bars.  She was beside herself.  And I was beside MYSELF. 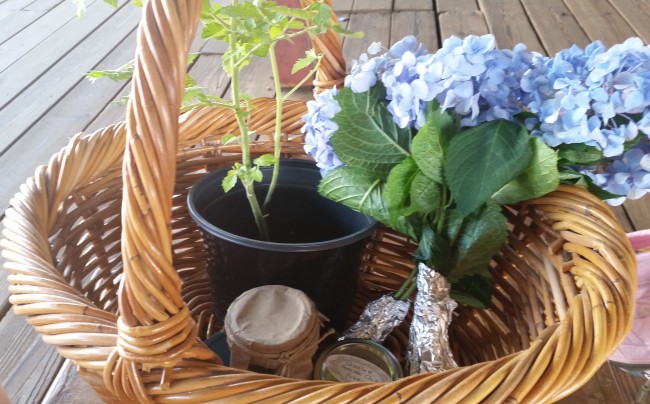 In the end, we headed home with a healthy tomato plant, a bouquet of fresh hydrangeas, a jar of kale/basil pesto, a jar of chocolate avocado chia pudding, and a container of almond turmeric cayenne dip (which is amazing and has a little kick to it).  The children came home with a coaster and a bag of cookies, respectively.  And the certain knowledge that a stranger thinks their art is valuable.

Even more than that: they never doubted for a minute that someone WOULD think their art was valuable.  I had to really reign myself in from warning them off, and it was HARD.  I did caution that maybe no one would out their name down, and that was OK–but only when they asked.  I wanted to offer them a view of themselves as creators, people who could make with their own hands, and that their work was worthy of trading for someone else’s work.

I am so grateful to the people at this event who were genuinely excited to take home my children’s hand drawings.  The woman who swapped for the elephant picture said, “It’s gonna look GREAT on my fridge!”  But what they gave my children was much larger than the objects they traded.  It was the absolute knowledge, at a very young age, that they are Makers, and that their work matters.  I could never be more grateful for that.

Patty Young is Taking Over 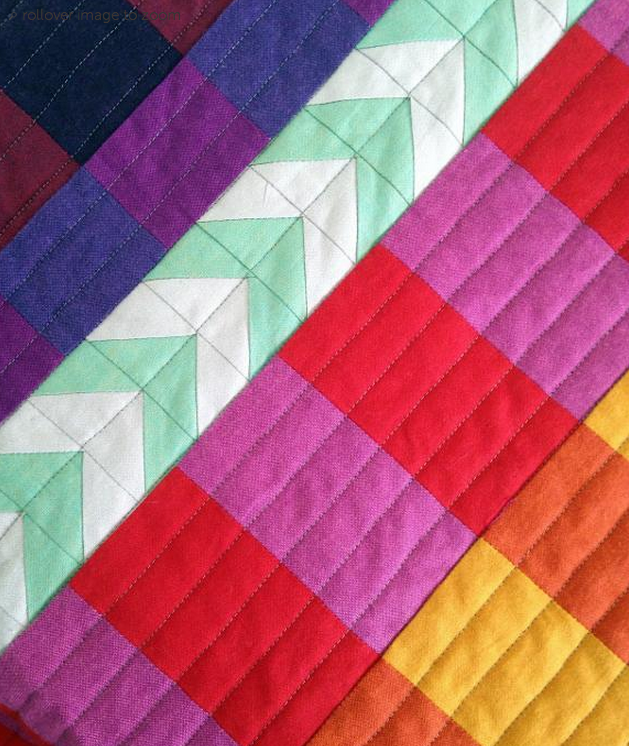