When we moved out of our old house and into the rental where we are currently living, I knew we’d have to move my cutting tables. I built them from Ikea kitchen cabinets after being inspired by this fabulous Ikea hack–I have one for my sewing machine and serger, and another for cutting (and piling stacks of in-progress projects, but that’s a whole other story). 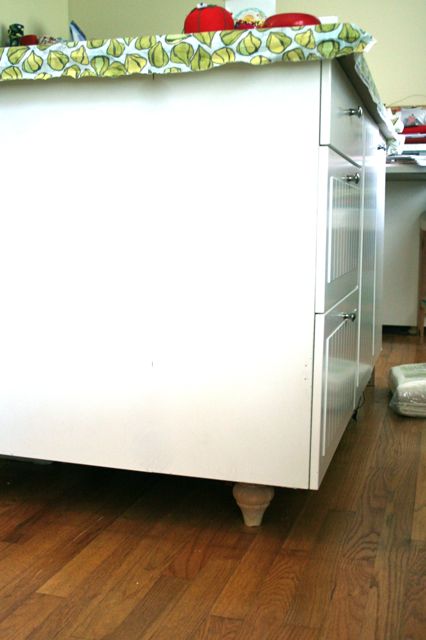 Because they were custom-built, I got to make them any size I wanted.  Which means no one was really paying attention to the overall dimensions, because why on earth would I be worried about that?  Which means that once I added the wooden feet at the bottom, the tables were too tall to go back through the doors.  Oops.

So when we moved out, the moving fellas took the feet off and squueeeeeeezed the tables out the door.  And at the other end, they left the feet off and took the door off its hinges and squueeeeeeezed it through that door.  Once I got the feet back on, it became clear that the table was a little the worse for wear: the fabric was ripped and had come un-stapled along the edges, and one corner had actually caved in from all that removing-and-replacing of feet, so that it wasn’t stable any longer.  Every time I put weight on the table in order to organize or cut fabric, the whole table would lean to one side creepily, and I wanted to cry because I spent all that time and money lugging this thing from one house to another and now it was falling apart.

But wait!  I had also lugged the wooden blocks that we bought well over two years ago to attach the baby gate at the base of the wooden stair rail in the house that we no longer own, the gate we never got around to putting up.  Those were just sitting around, with no certain future.  And wouldn’t you know it?  They just happen to be the right size for propping up my sagging table! 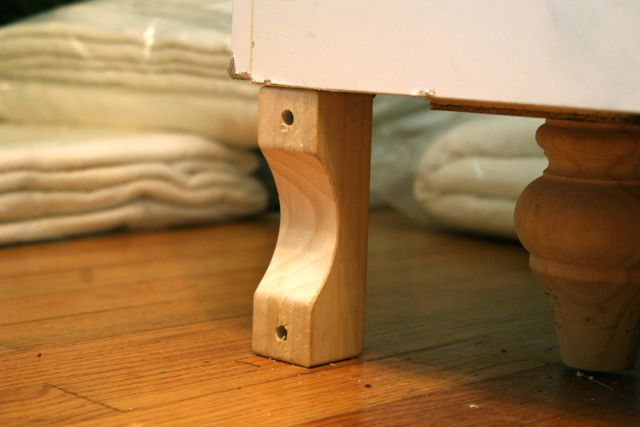 I laid down on my back and used my foot to heave the corner of the (extraordinarily heavy) table just enough to plink the bit of wood underneath and make my table both level and secure.  I don’t even care that it’s all scuffed up, or that the fabric is dangling off the sides, now that it will bear weight and my pens don’t roll off onto the floor. 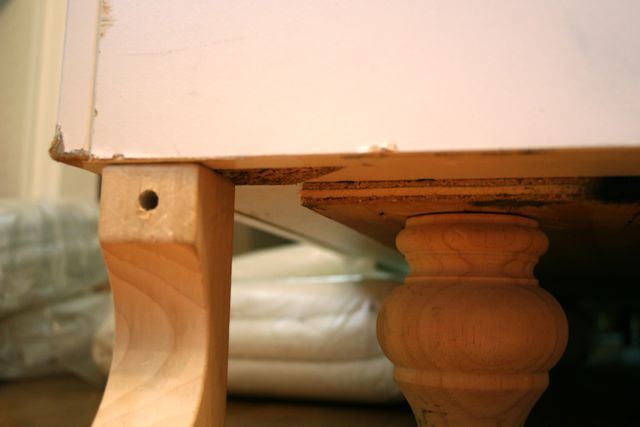 And THAT, my friends, is what we in the biz like to call ingenuity.  We’re going to have to move it one more time, assuming we get the house we’re currently offering on (hope!), so I’ll do it all over again there.  Once we get settled, maybe I’ll even update the sad fabric covering and touch-up the scuff marks.  In the meantime: woot!