Geranium Pink is the New Black 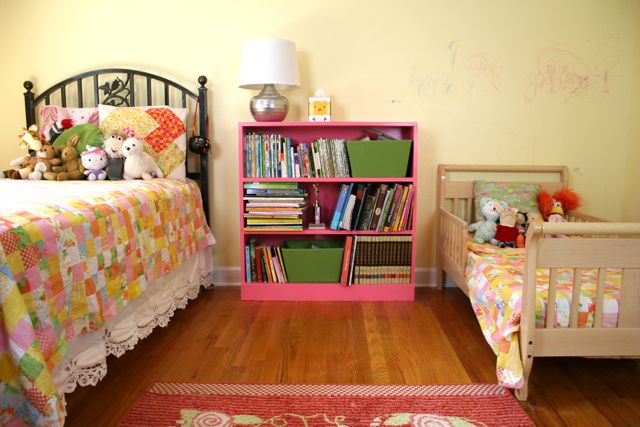 Currently, this is our girls’ room.  Our six-year-old and three-year-old share this space, and we’ve only recently moved out the crib and made way for a bigger bed.  It was the start of a whole host of changes.

First, let’s go back in time.  When we first bought this house, here’s how this room looked: 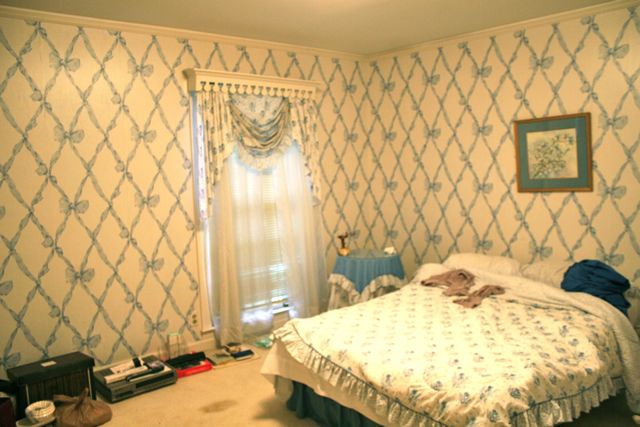 Compared to a similar angle of the same room now: 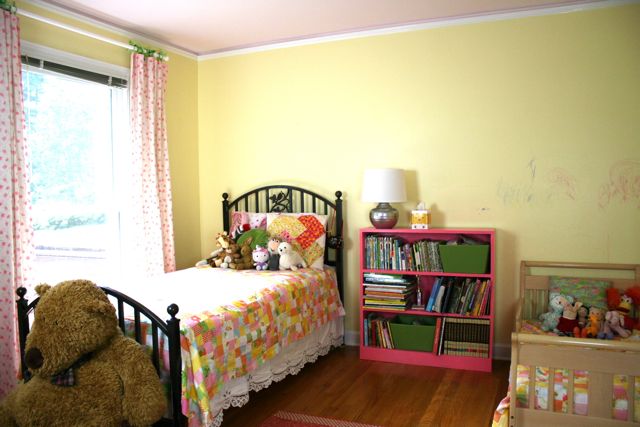 I recognize that this room isn’t yet “finished,” but it is a far and refreshing cry from the tragedy it was previously.  Can we start with the powder blue ribbons-and-bows wallpaper?  With matching cornice above the window, natch.  AND matching curtains.  AND matching ruffled bed spread.  AND matching table cloth–you can just see it in the upper corner of that photo.  Not to mention the pitiful carpeting.  Both of these were meant to be rooms for little girls; the first was likely decorated–we think professionally–back in 1986ish, when it seems the remainder of the house was re-done.  It sure feels like 1986 up in there.

To date, we’ve pulled up the carpeting; painted over the wallpaper in a creamy, buttery yellow; painted the ceiling a sweet and soft pink; painted all the trim bright white (rather than the buttermilk shade it was through most of the house before); and changed out the window treatment–I don’t do matchy-matchy (more on that in a sec).  There is still plenty left to do in this house, so we’re tackling it one project at a time.  The curtains and oddly-still-hanging-but-never-used-so-why-don’t-we-just-take-it-down mini-blinds are on the list, but we are starting with the major furniture first. 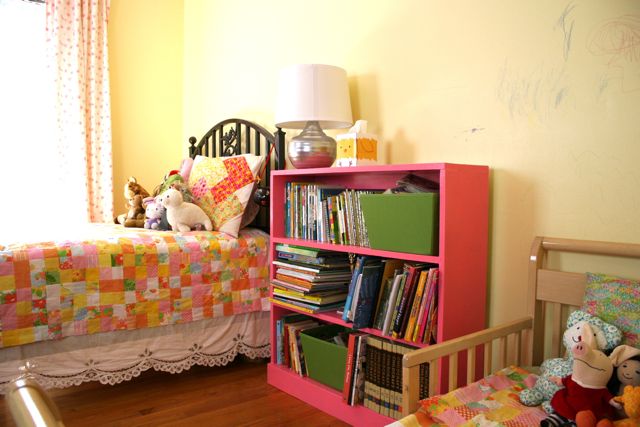 Since we moved here, our three-year-old has been in her crib.  She was only 18 months when we bought, so that makes sense.  But after recently speed-potty-training her, it was time to move the crib out and move a bigger bed in–and that has brought about a whole string of domino furniture moving. 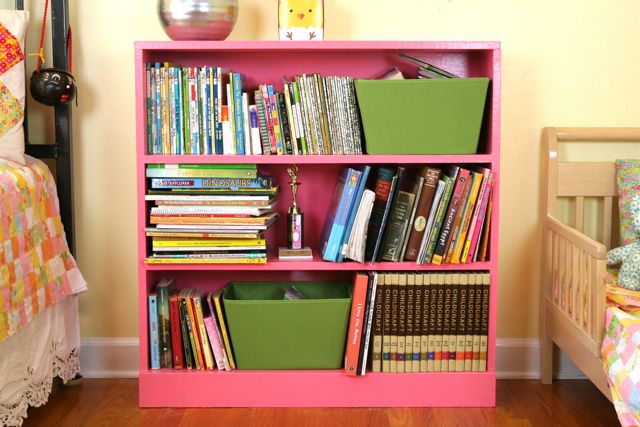 Three coats of paint, to be specific.  If you follow me on Instagram, you watched as I covered this puppy with Grand Hotel Geranium Pink from Lowe’s, part of the Valspar National Trust for Historic Preservation paint collection.  I know, this is a lot of paint for a historic preservation color.  But it’s so awesome!  I chose it without a single swatch of anything from this room which was bold of me, but it worked out well–it seems to play nicely with the inexpensive Ikea rug on the floor, and is pretty much making out with the postage stamp quilts I made for the girls’ beds.  The bookcase was my husband’s when he was in school (when it was white), then our oldest’s in her room (yellow), then our son’s in his room (green), and now it is shared by our #2 and #4 children in its current color. 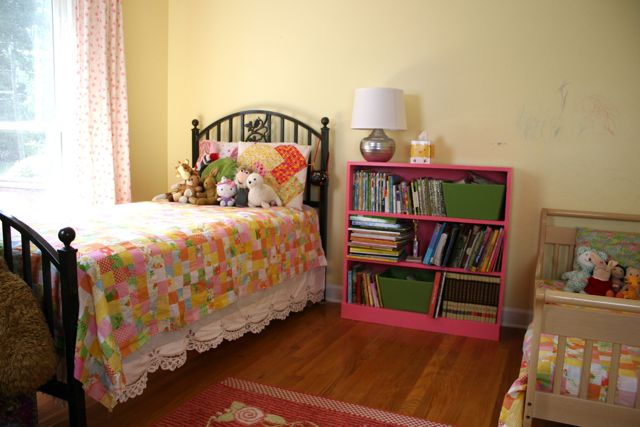 I don’t do TOO matchy-matchy, but I did want this room to feel like they share it rather than that they both just got stuck there next to one another.  The quilts are a big part of that, and the palette that they establish–and don’t worry, I didn’t skip a giant quilt reveal.  These are actually just the quilt tops, but since we were having guests over, I wanted to show the room a little closer to how it looks in my head than the partially-finished state it had been in leading up to that.  And this sweetly/brightly pink bookcase really made a giant difference in how warm and pulled-together the room looks right now. 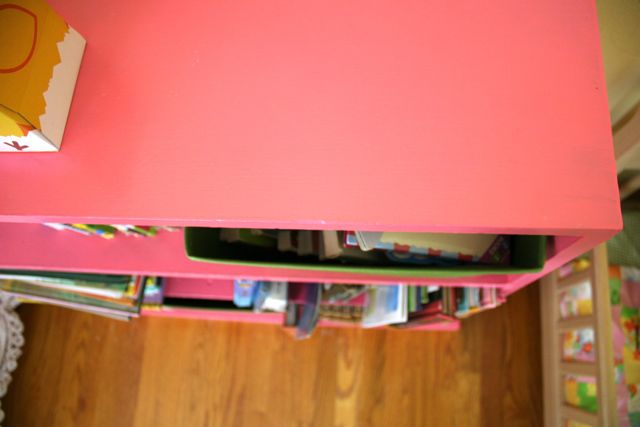 It’s a lotta pink.  I asked both girls what they thought, and they basically gurgled out their enthusiasm for the color.  And it really does make the deeper pinks in their quilts POP.  The baskets were an impulse buy from Home Goods, and are a great way to organize those ridiculous board books that take up so much shelf space but are really pretty tiny.  They’re all stacked up together, as is the collection of the first 32 Magic Treehouse books, which get their very own basked on the bottom shelf. 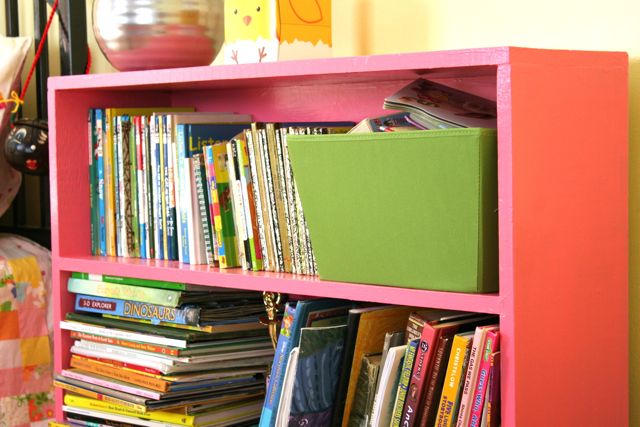 It is a near-constant struggle to keep the top of the bookcase clear of debris.  I don’t know what it is about small children–and little girls in particular–but “treasures” get carried in and piled up.  I think our six-year-old might have inherited a hoarder gene somewhere along the way, too, because she likes to make little piles of things to save and look at later on.  I work daily to find homes for all those things, and return them there.  I can tolerate the tissue box–it’s a chicken!–and the lamp, but I really would honestly prefer that everything else disappear. 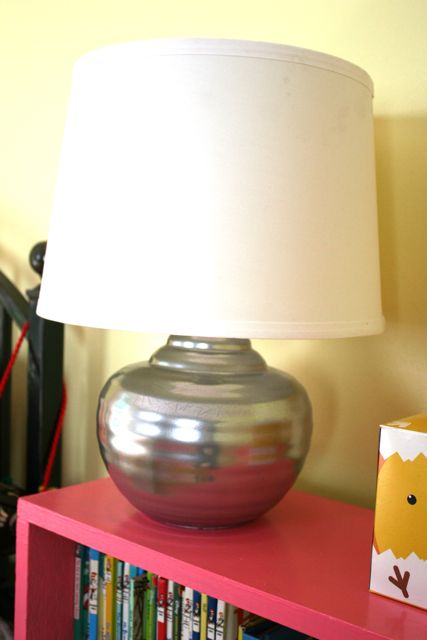 The lamp was a last-minute quickie project that I worked on between coats on the bookcase.  In painting other furniture, I’ve found that waiting 48-72 hours between coats–rather than the 12-24 that the can recommends–seems to make for a much smoother and less sticky finish.  This project was muuuuch faster than that, and took just a few minutes between light, light coats to dry.  Formerly, it was an off-white ceramic lamp from Ikea that I got in the as-is section.  The children “decorated” it with crayon, which you can just slightly see displacing the metallic spray paint I used, like a sad little Easter egg.  But in the end, even the little squiggly crayon lines don’t bother me that much–you don’t really see them that clearly in natural light–and the silver of the lamp is really sweet in here. 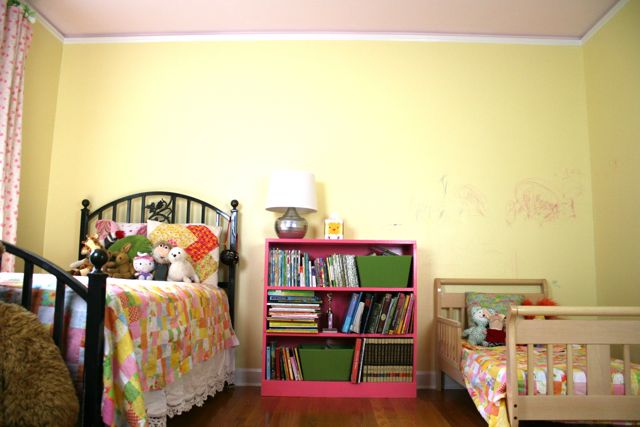 There is still plenty left to do in here.  We have six sketches of vintage Barbie designs in silver frames that are going above the bookcase, and two bracket-less shelves, one for above each of the beds.  My step-father is a machinist and made the twin bed, and is making a matching twin to replace the toddler bed, so those will be swapped out as soon as it’s ready.  The crayon that our littlest added to the wall behind her crib (now it’s over the head of her bed) will need to be painted over again–sigh.  And I’m currently planning a new curtain for the window, which right now looks like it’ll be a wide green-and-white cabana stripe on drapery rings.  Small steps, people, but don’t discount something like a painted bookcase making a big difference.

What’s the smallest thing you ever changed in a room that ended up making a big impact?  I can always use a little inspiration! 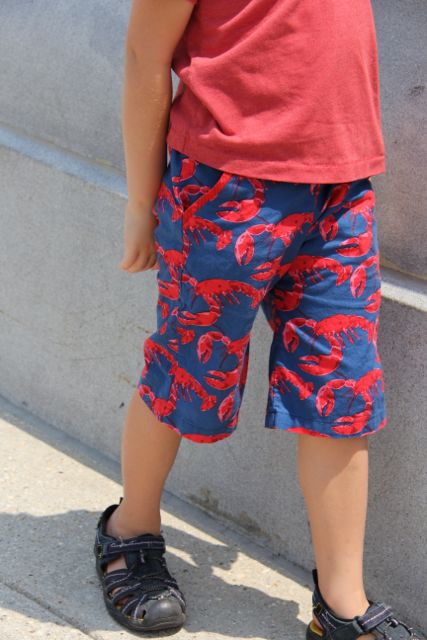 Lobster Shorts for the Boy, and the Myth of Flat Piping