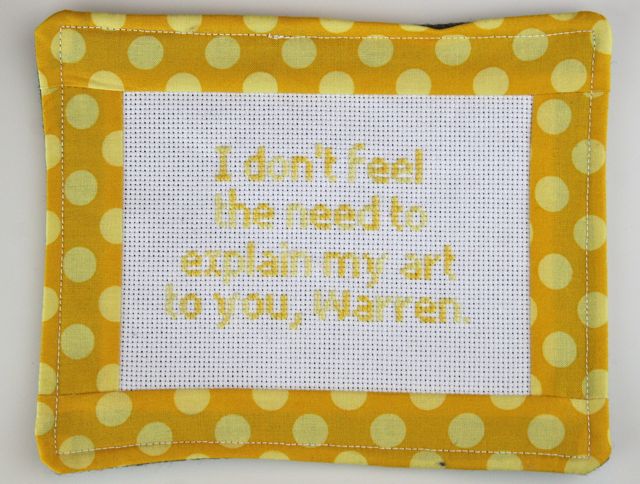 I have been on an insane cross stitch kick lately. It all started with this one, which was a gift to me from a friend. We’d had this conversation on the Twitters, and she tweeted the quote above, and I replied, “I’m going to need that on a cross stitch.” And she said she’d make it for me! Which is awesome and is totally the way that Twitter works–it let me meet Tony Danza, it has allowed me to keep in touch with some of my dear friends who I see only once or twice a year, and now it got me a cross stitch, custom made. Woot! But I didn’t want to let her do something for me and do nothing in return, so I offered to do a trade. I had already gone on a shopping binge over at Kitschy Digitals and picked up a number of fabulously nerdy cross stitch designs, and mentioned I had a Star Wars one. Reply: “Done.”

So I’ve been working on this one for a few weeks: 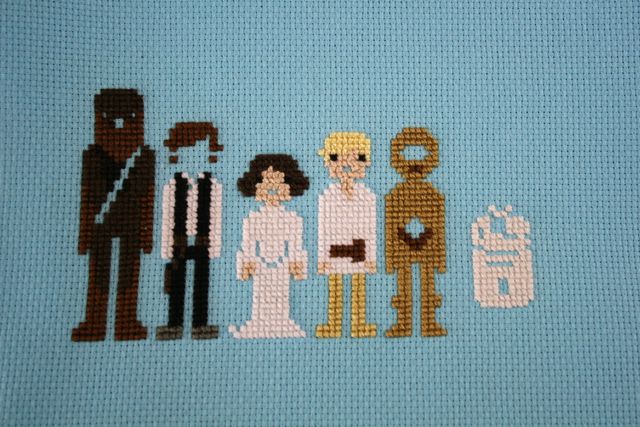 How great is that, right?  My husband is more than a little perturbed that this isn’t for him and his Mantuary (never mind that the Mantuary will be in the basement which is currently on the schedule to be finished in 2020).  He and I both also think that I should make one for his dad, whose call sign when he was a pilot in Vietnam was Skywalker, and who now owns a shaggy yellow lab named Wookie.  But this one is very specially ear-marked for Al, and I am soooo excited to see it nearing completion. 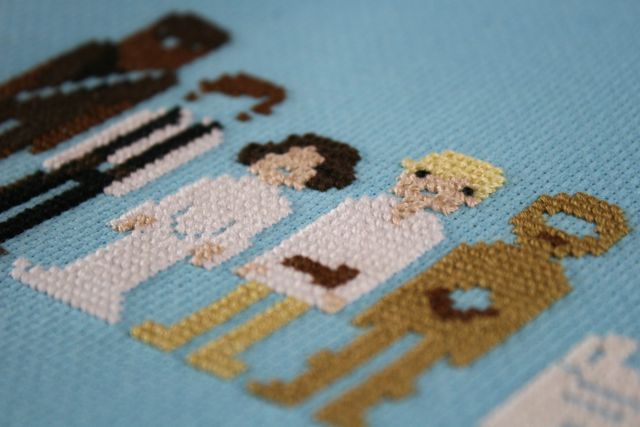 Like all good obsessions, though, I couldn’t settle for just one.  I’ve accumulated a number of very most favorite cross stitch pattern shops in the past weeks (see links below), and have started to sew out the designs that are calling me the loudest.  Like this one: 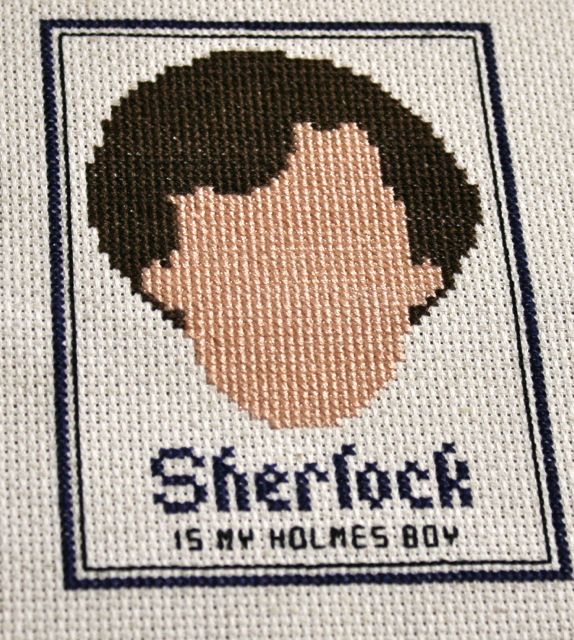 Can you stand it??  Sherlock is my Holmes boy!  On an oatmeal-colored 14 count Aida, with the text and border in navy.  I love this one, but made it for my friend Amanda, who took me with her to meet Tony Danza (via Twitter).  She offered me the chance of a lifetime, the least I could do was a little cross stitch!  I put a photo up on Instagram and someone commented that she would never finish a cross stitch–but this one really WAS easy.  Lots of simple, straight filling in, very clear pattern, uncomplicated shape.  I did this off and on one weekend while I was under the weather with a pollen-induced sinus headache–and if I can knock this out under those circumstances, baby, ANYONE can. 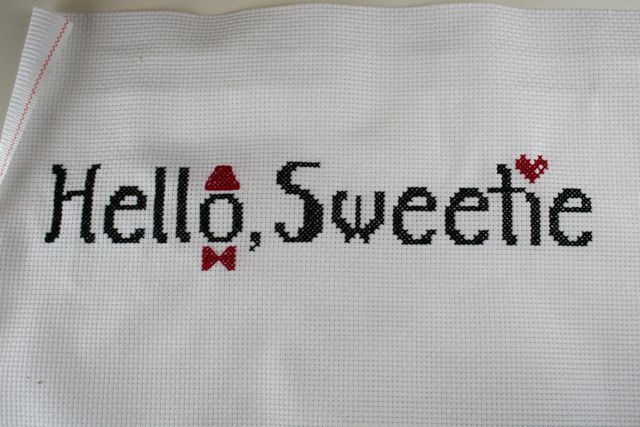 I’ve spent some time playing with various sizes of base cloth, too, and with how many strands of floss to use.  The Star Wars is done with all six strands of floss held together, and I really love the knobby texture that gives, but I won’t pretend that it hasn’t slowed me down–notice it was the first I started and still is incomplete.  So for the Sherlock piece, I went down to three strands held together, with two strands for the backstitch (on the smaller text and on the skinnier border).  Both are done on the same 14 count Aida cloth, so it was really cool to note the difference in how they turned out.  Then, on this fabulously obliquely-referencing-Doctor-Who one, I got the pattern and was a little disappointed with how small the finished product was going to be.  At first I thought, “Crap, now I’m going to have to blow the whole thing up and make it bigger if I want a pillow.”  But then I realized I could just sew it out on a larger-scale Aida.  So this is done on 6 count Aida, the largest scale I could find.  The “count” is the number of squares per inch in the fabric–so the 14 count is very small spacing between the Xs you’re stitching, and the 6 is naturally much larger: 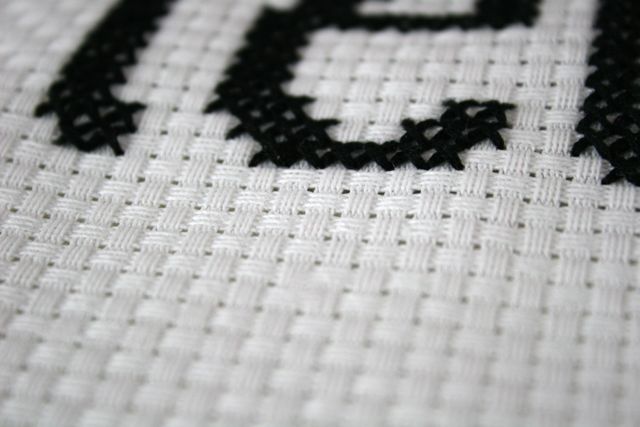 I went ahead and used all six strands held together on this one, too, because I like my Xs to really fill up that box and have some presence.  With something this huge, that would’ve been tough with only two or three strands.  I also used a slightly larger needle, and varied my technique a bit–on the 14 count, I have to put the needle in the fabric, then reach around from behind the hoop and pull it through.  On this giant 6 count, I was able to put the tip of the needle in one opening, then out the destination opening, all from the front of the fabric and with no hoop–the larger squares made the surface more flexible and easier to work with that way.  I’m not sure which is the “correct” way to cross stitch–my lessons with Grandma Miriam amounted to making all my slashes in the same direction across a row and then working back going the opposite direction, and after that I was on my own–but I enjoyed playing with more than one technique. 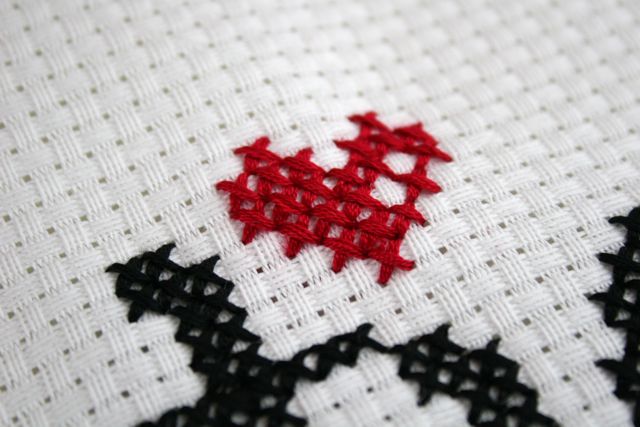 And how fun are these patterns?  I realize now that I’m assembling all the images together that they’re ALL nerd-centric, but I own that, with no apology.  Love me some Doctor Who and Sherlock and Star Wars.  And Harry Potter: 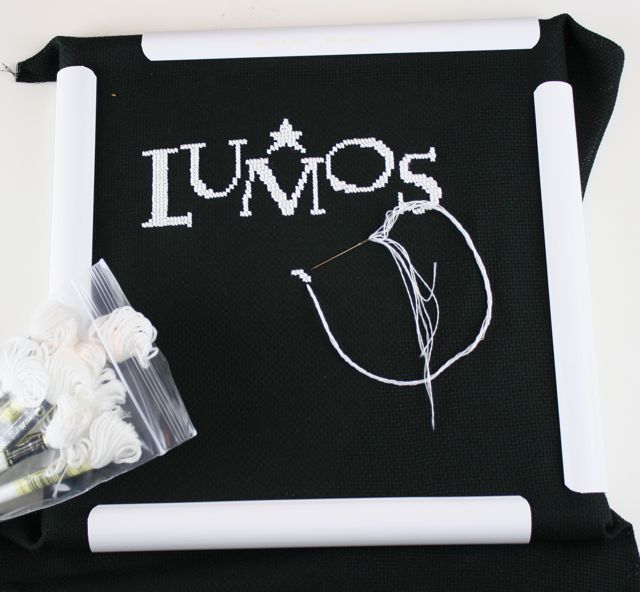 This one is a graduation gift for my oldest, who is finishing up her final year of high school THIS MONTH.  Have I mentioned that?  Yes, I think I have.  Sigh.  They grow up so fast. 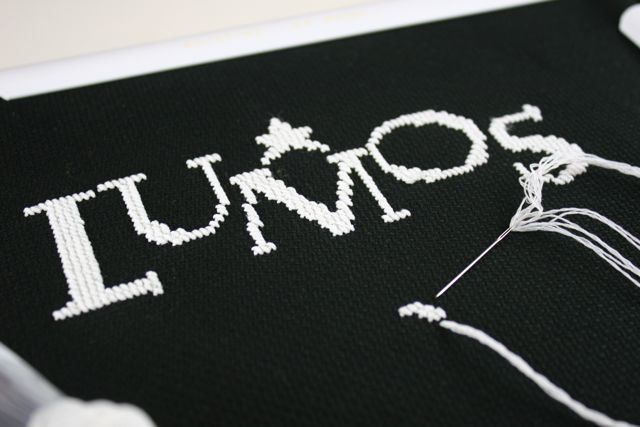 She and I both love Harry Potter, and “Lumos!” seems like an appropriate message for a girl heading off to her new intellectual life on a college campus.  Or at least, a hope from a mother that her child will walk into the light while she’s on that college campus.  Oy.

Plus!  This one’s done in glow-in-the-dark floss!  Which is totally cool: 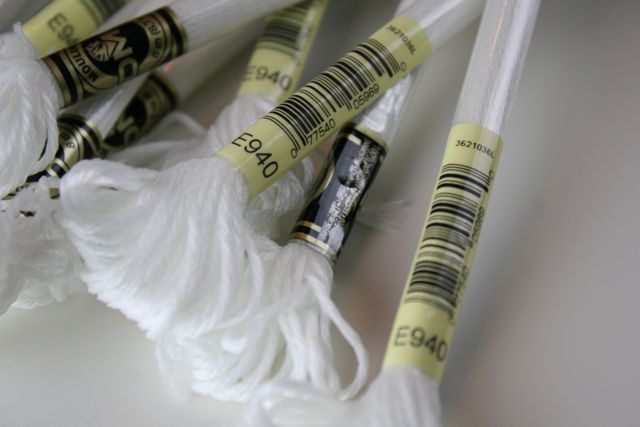 And it really does glow, too.  Pretty well.  It’s a BEAR to work with, and tangles easily and is hard to thread through the eye of the needle–and makes a lot of my stitches less tidy than I would like–but when I take it into the closet and close the door to check that it really does do what it says it will do, it DOES.  This one will be a pillow for her to put on her bed in her dorm–which I think she will.  She and I both believe in separating the wheat from the chaff when it comes to friends, and any kid who doesn’t think a Harry Potter pillow that glows in the dark is cool probably won’t make the cut.  Fair enough.

Should you be looking for some cross stitch designs of your own, check out these fabulous shops–I have purchased one or more designs from each of them over the past six weeks and been really pleased with the quality and speed of delivery:

And for supplies, I’ve had great success with Everything Cross Stitch.  Their patterns are a good bit more matronly and traditional than what I would probably stitch up, but their pricing on floss, needles, and accessories is great and they ship really quickly.  For a hoop, like the one in the Lumos project above, I use the Q-snap frame, like Anna Maria does.  You can get one from your local quilt shop (lots of them carry these frames for hand quilting–I use the 17″ x 17″ for that), or from Amazon, CrossStitchers.com or CreateForLess–I’m using the 11″ x 11″ in these photos, but the 8″ x 8″ is a great size, too.

Have fun cross stitching, y’all!  I’m off to see if I can’t get R2D2 some lights going… 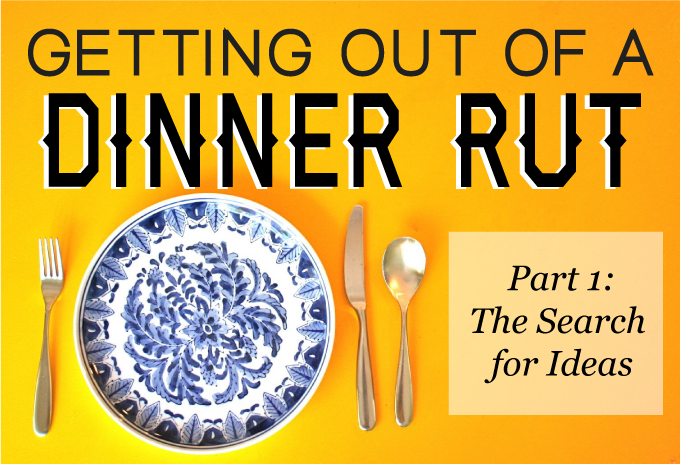 Getting Out of a Dinner Rut 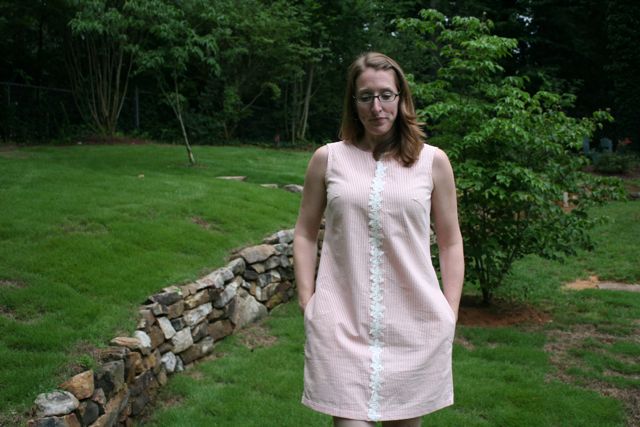