Moving to a Big Boy Bed

We’ve moved our youngest out of the crib.  It feels a little like the end over here–our baby isn’t really a baby anymore, and as far as we know, we won’t be having any more–but it also feels like we’ve lost our minds–now they can all roam at will, and we’re vastly outnumbered.  We’re playing a zone defense over here, rather than a man-t0-man, and I think we’re behind on the leaderboard. 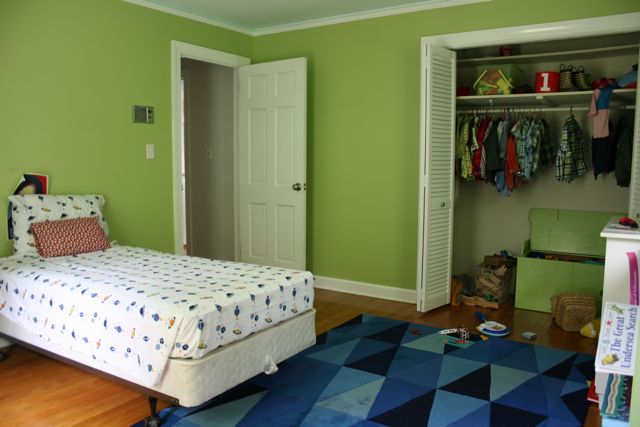 In order for the baby to move out of her bed, our boy had to move up from the toddler bed.  It went something like this: boy from toddler bed to big boy bed; baby from crib to toddler bed; crib to Goodwill.  We’re all growing up around here.  I left for Quilt Market last week, and our son decided I was going away to get his Big Boy Bed.  I did not disabuse him of this idea, since it made him much more willing to let me head out of town–but getting that mattress into the overhead bin was a bear, I’ll tell you what. 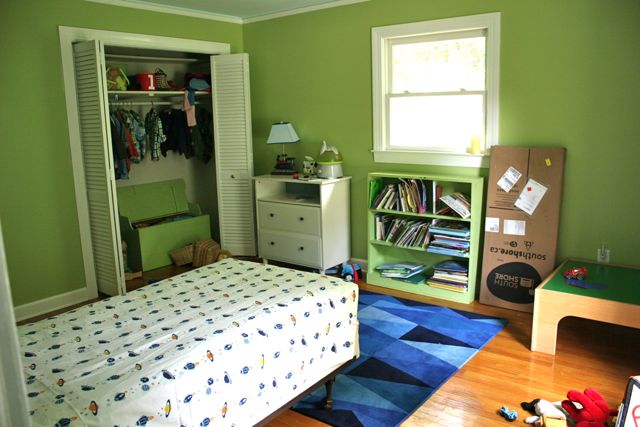 His room has needed a little more transformation since we moved into this house than some of the others.  When we first bought, it was remarkably ugly: 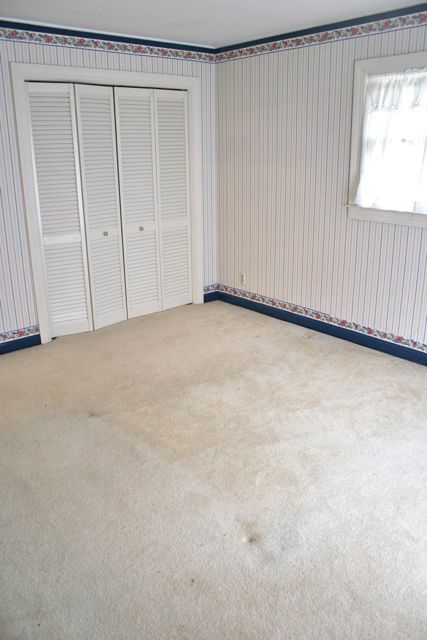 All the bedrooms had full carpet–which was at a bare minimum a solid 35 years old and seriously skanky.  There was a single room in the entire house that didn’t have wallpaper or bifold doors or both; this room, regrettably, had both. 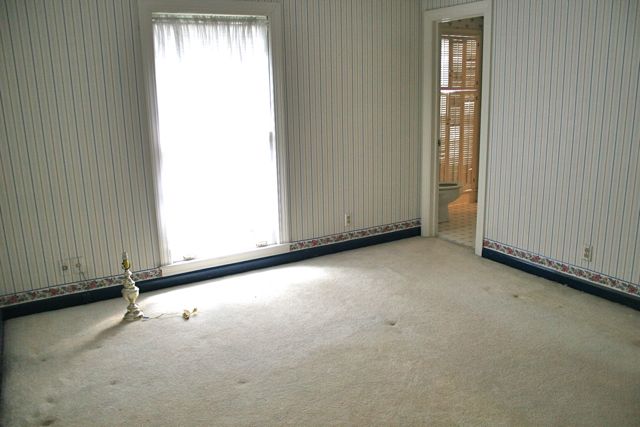 Based on the decor, I can only infer that this was meant to be a boys’ room in the early 1980s.  The trim is all glossy, GLOSSY navy blue, the wallpaper is accompanied by a “masculine” floral border, and there is RIBBON glued where the two meet.  RIBBON. 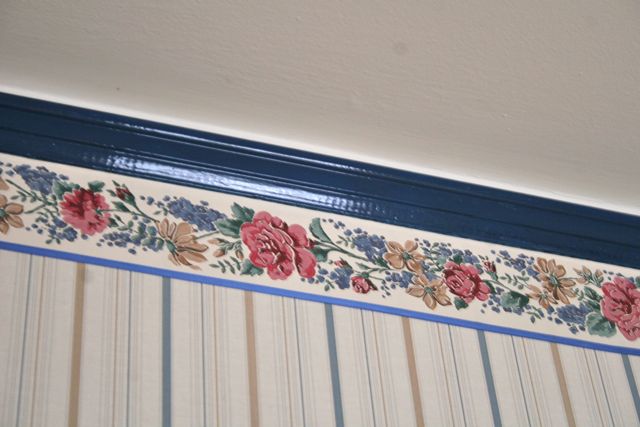 See it there, below the floral border?  My mother and I started taking it off, and it was nearly one continuous piece of ribbon around the entire room.  GLUED ON.  Heaven help us.

Before we moved in, we painted over the wallpaper, as we did in every other room in the house--we tried to remove the wallpaper in one room, but it appears to have been glued directly to the wallboard, and there was no way on this planet it was ever coming off.  So: two coats of oil-based primer followed by three coats of paint.  But that first winter, there was this really odd smell coming from that one room–sort of mildew-y, sort of chemical-y, something undefinable.  We didn’t smell anything remotely like it in any other room, and it made me nervous–like, I didn’t let my son sleep there with the door closed, nervous.  Since we knew there was some mold issue somewhere in the house, and that we’d discovered some discolored wood in the flooring beneath the carpet when we removed it, we suspected the wall between the bedroom and the jack-and-jill bathroom might have some mold damage, we decided to take that wall out.  Which made sense, since that’s where we put the pocket door to make the bathroom bigger.  All this to say: we also took the walls in his bedroom down to studs and replaced the drywall throughout: 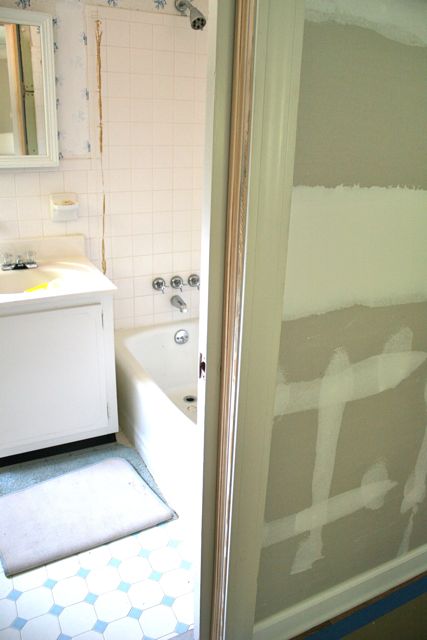 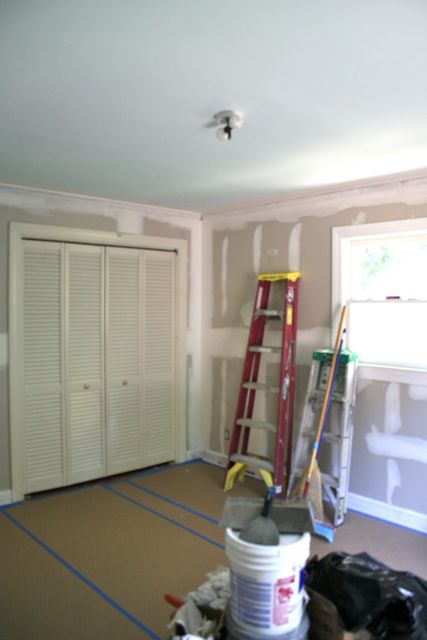 We never did find an obvious source for the odor, but it completely went away, so it must have been lurking there somewhere. 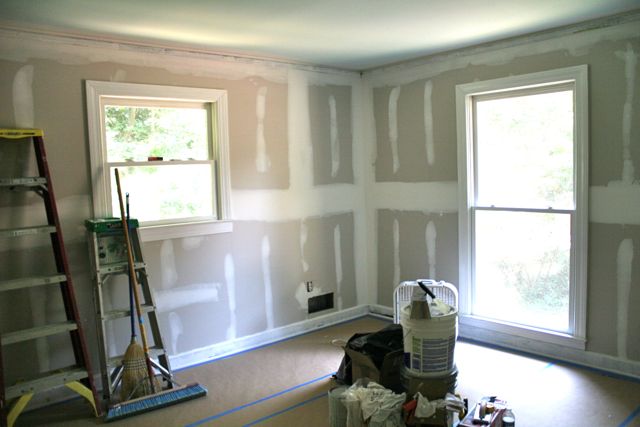 After the walls were re-done and the bathroom completed, we re-painted the same awesome jalapeno pepper green that we’d done before–along with the sky blue ceiling that I thought he’d enjoy during his little boy years. 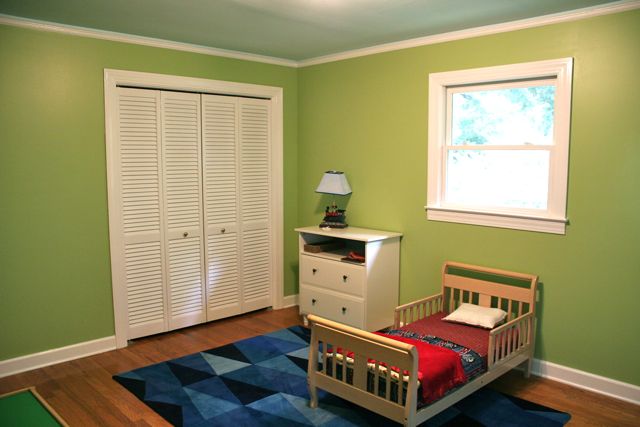 This was his room before I “went to Portland” to get his big boy bed.  The same toddler bed his sister used, along with the Ikea changing table/dresser that we bought for the baby when we lived in our last house and she slept in the closet. 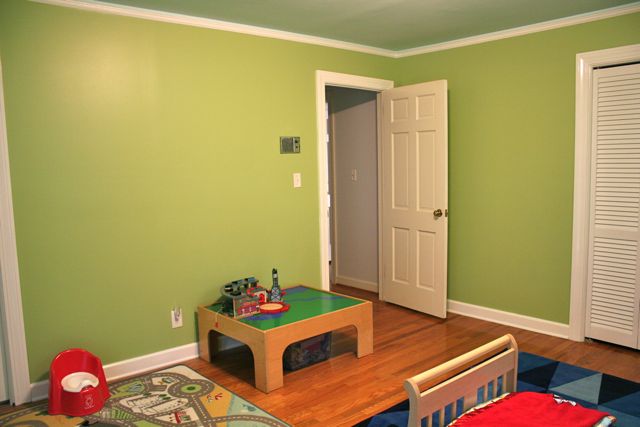 He also has his train table–purchased as his only Christmas gift two years ago from Craig’s List, along with a huge selection of trains and tracks, for $100–and a play rug from Ikea.  There’s a bookcase in the corner that was my husband’s in college.

When we planned to bring in a new bed, I knew I needed to update a number of things, and now we’re at the starting end of that list.  Here’s what’s left to do:

We already have the new dresser, along with a matching bed side table, waiting in the garage to paint. I’m going with a linen natural color, and his new quilt will be natural linen, as well, with some sashiko quilting a la the whole quilt project in Stitch Savvy and the work of Folk Fibers. The book nook in the closet will get a smaller bookcase from his sisters’ room (they’ll swap with him) and a Rollie Pollie using Dana’s pattern. The bed skirt will be Kona pacific, which is what I thought I’d use to extend the drapes, but I want to avoid anything being too matchy-matchy, so I’m currently hunting the perfect yellow-orange-but-not-too-orange school bus solid cotton to add as a pop throughout the room, including as a skinny border on the curtains and Roman shade. We already have a collection of vintage travel postcards sent back by my husband’s grandparents from when they traveled in the 60s and 70s, which will go in frames on one side of his wall.

Now it’s just a matter of finding the time! Hubs will split a gut if I do a lick of work in this room before sewing some drapes for the master bedroom–it’s only been 18 months, I really don’t know what he’s all worked up about. So expect an update on that room before we move the bus on this one, y’all. Wish me luck!