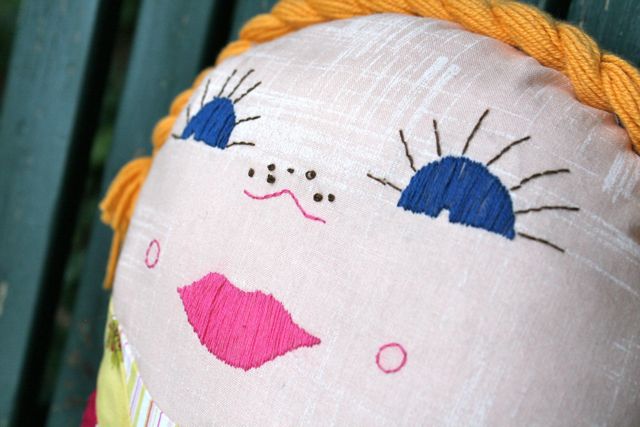 I suspect I haven’t mentioned this previously, but I was actually born in Germany, on an American Air Force base where my father was stationed.  My mother, who had (quite coincidentally) taken German as a foreign language in college in the 60s, was delighted.  We lived off-base, in the then-tiny town of Bittburg, in then-West Germany, and my older sister and I attended “German kindergarten,” or as the Germans know it, kindergarten. 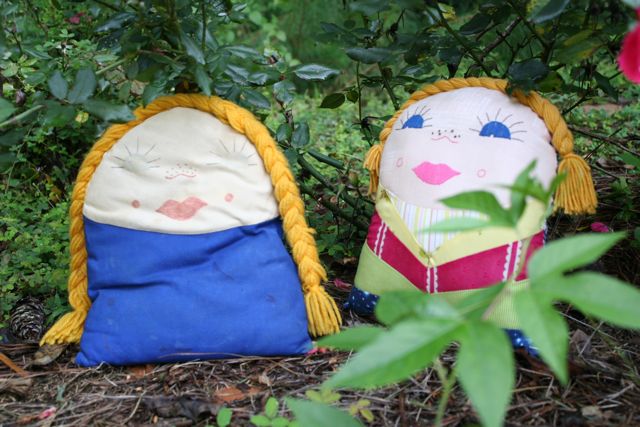 When I was nearly four years old, my sister and I prepared to move back to the States with my parents, and shortly before, we “graduated” from kindergarten.  At the graduation ceremony, each of the children was given a small doll, handmade by the staff (my mother could tell you their actual names, but I was a very small child, so you’ll forgive me if I only remember these fine and crafty ladies as tall and shadowy huggers with kind voices and strong arms).  Each doll was made to look like the child who received it–mine had a blue body and golden-ish-reddish hair in braids.  That’s it, above on the left.  Oh, how I loved that doll.  I have dragged her around for the last (cough) 30+ years, and none of my four children has ever been permitted to play with her. 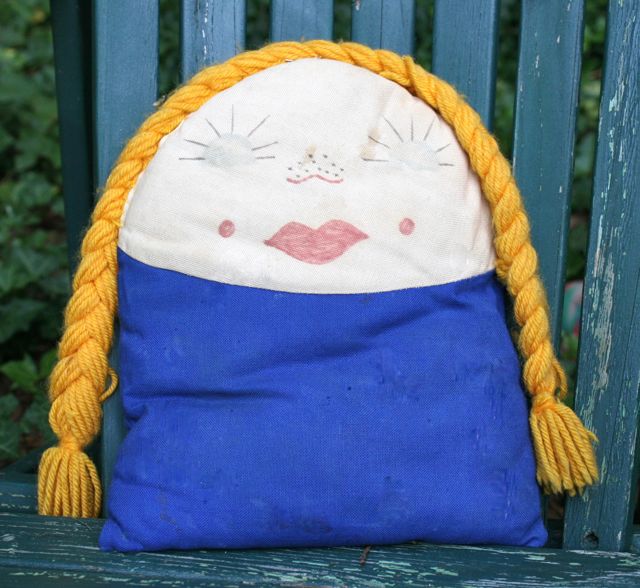 Her hair is yarn.  The facial features are drawn on in some kind of 1970s fabric marker (they might have called it “paint” back then).  Her body shape is so simple and sweet, and makes the perfect sized pillow for a small noggin at naptime.  (Pay no mind to the small dots here–she got excited under the rose bushes and knocked some morning dew on her little face.  Kids!) 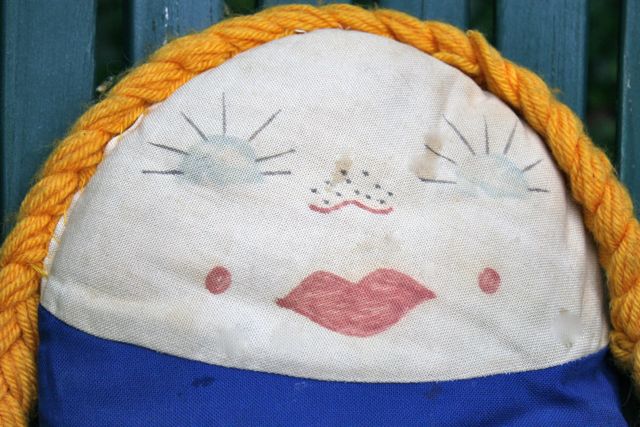 A little while ago, I wanted to re-create this doll, sort of like I did with my teddy bear.  So I drafted a pattern and sewed it up: 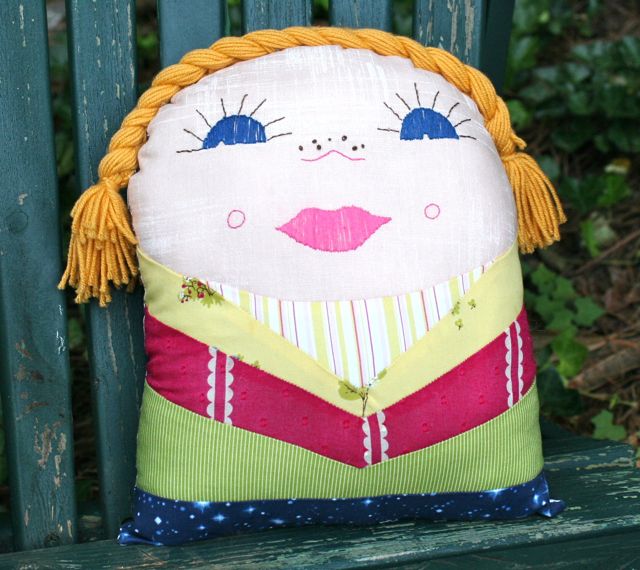 Where the original had a solid-fabric body, this one is patchwork.  Where to vintage one has a painted face, this is embroidered.  But other than that, I was as true to the first doll as I could be, in size and spirit and squishiness.  I wanted my children to have a little kindergarten nap-time pillow friend like I had. 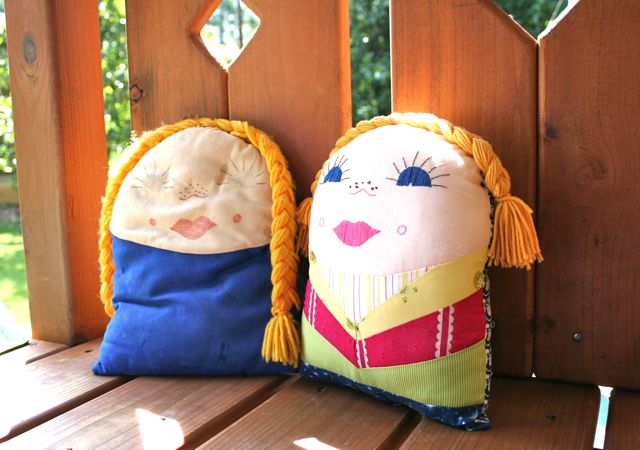 The embroidery took the longest, both tracing out the shapes and stitching each little bit on place.  But I loved the sweet, sweet feel of the original, and wanted so much for this new version to have some of that personality.  I can totally imagine the blue one (with German accent, of course) playing tea or dollies.  The newer one is clearly an American, no doubt about that.  But I was, too, and I spoke perfect German (until the age of four–even my fluent mother couldn’t convince me to speak German at home, because apparently I came out of the womb convinced that I should only speak English, because ‘Merica).  So these girls could absolutely be best friends–and not in any creepy Bratz or Horseland way.  REAL friends. 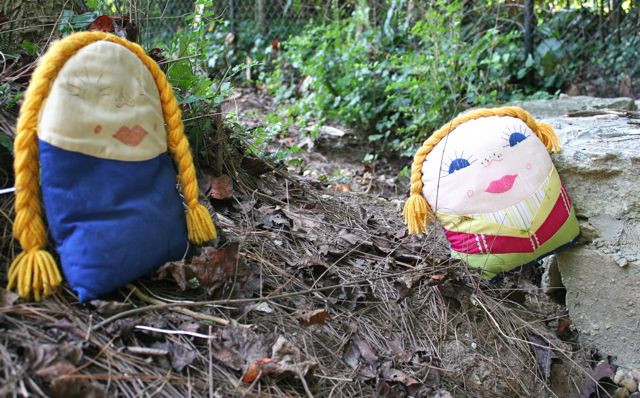 See?  They’re playmates!  Here they are, taking a hike in the Black Forest, by a simple rocky stream, heading to a secluded waterfall where they will pick berries and watch cloud shapes drift by overhead. 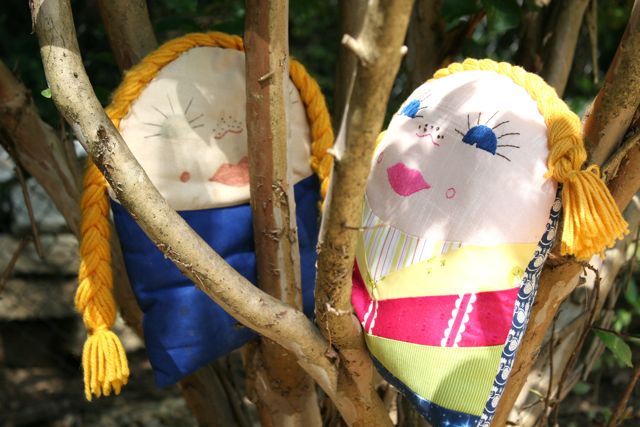 And here they are, climbing trees together and singing songs, like the Von Trapp children, but without the window treatments.  Ah, youth.  If only they had more time to prepare for the festival in Strasburg!  They would be sure to win first prize.  Nazis or no Nazis. 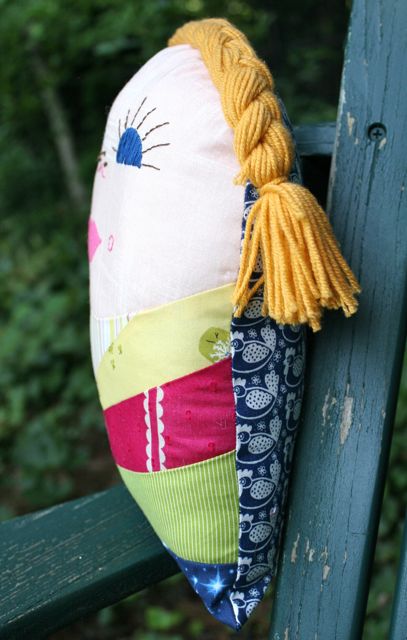 As I was hunting fabrics for my re-creation, I wanted her to have a very specific feel: springlike and playful, but true to her roots.  I chose a navy-and-white chicken print that I purchased years and years ago, imported from Germany.  I addooooorrre this fabric, and used the very last scrap I had on hand to give her a little surprise on the back.  Something that really had nothing to do with the doll, but that would have meaning for me and make this little lady even more special. 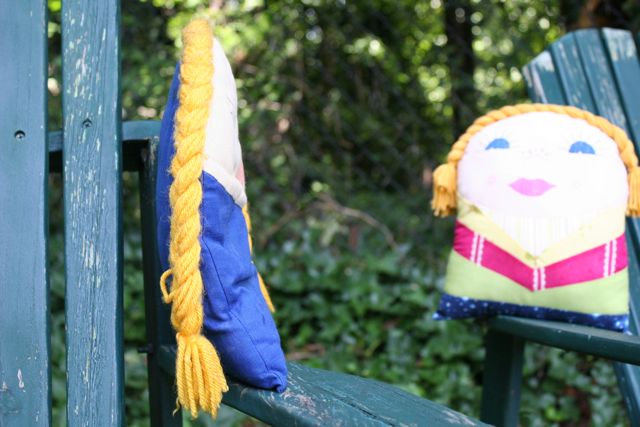 If I have even the slightest regret about these girls, it’s that they aren’t more poseable.  Something about them–their dispositions, their little pillow shapes with personality, makes me want to craft whole storylines starring them.  But they refuse to stand up or turn their heads over their shoulders.  Which I suppose makes them perfect pillow companions, just not very versatile actors. 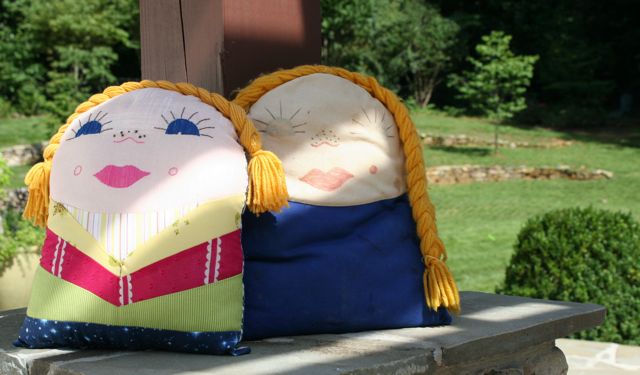 My two older girls are at school all day each day, but my two youngest will continue to have “rest” in the afternoons, even if they don’t always sleep.  I like knowing that a memory from when I was little can come back to life for them, and they’ll have their own stories to share.  A friend who will lie down in your room–or on the grass–with you and keep you company while you daydream, that’s the best friend you could possibly have. 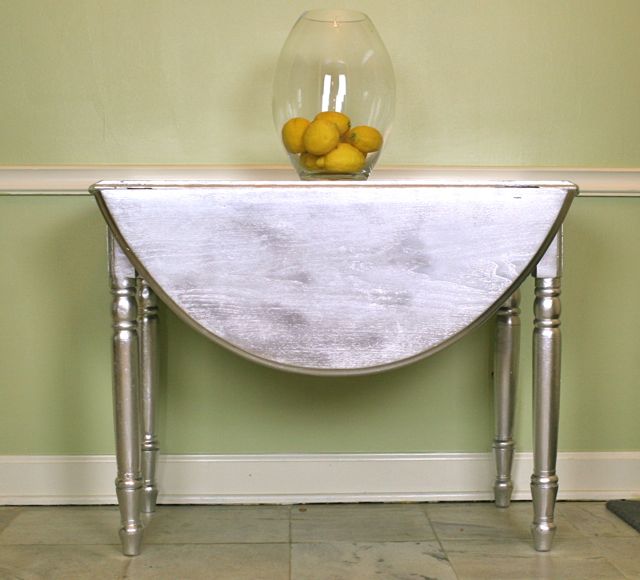 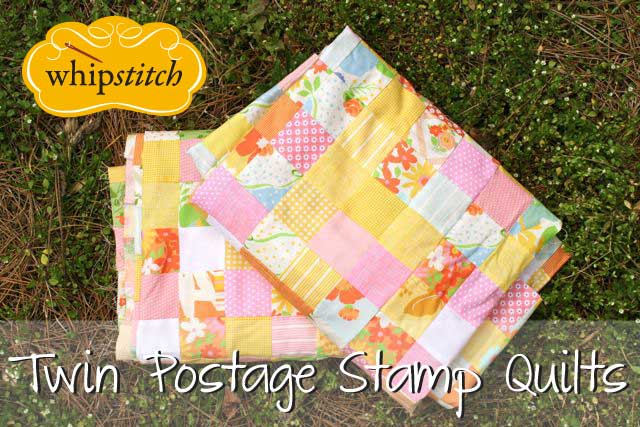 Even Better In Person

Our youngest had pajama day at school, and wore he