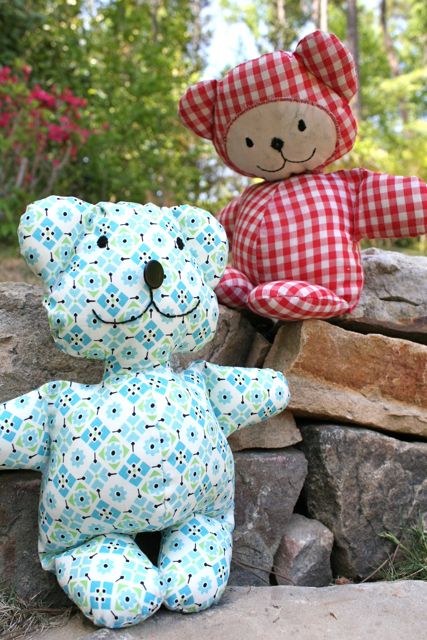 When my sister and I were very little, we had a bear family, sewn by my mother.  I’m sure they came from some Better Housekeeping freebie pattern–there was a baby and a Mommy and this one, the Daddy bear: 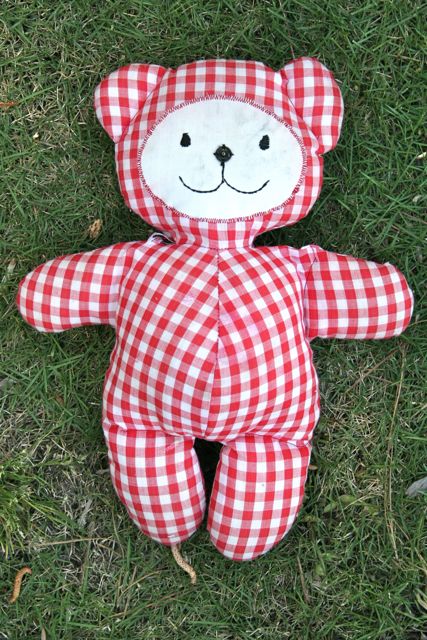 I love that he’s gingham, and that he’s got a sweet little applique and embroidery face.  My mom isn’t exactly known for her devotion to hand-sewing, so this is extra special for me.  I somehow have been handed down both the baby and the Daddy (somehow, because my sister could just as easily have gotten both of them), but the Mommy has gone missing.  (Maybe my sister has her?)  Some of the stitching along the arms has given way, and I love them too much to let my own children do more with them than admire them on the shelf.  But I am bothered that the Mommy is missing, and I wanted my kids to have the enjoyment of playing with a toy that I thought was charming even when I was little and didn’t really know what that word meant.  So I made them a new-vintage friend: 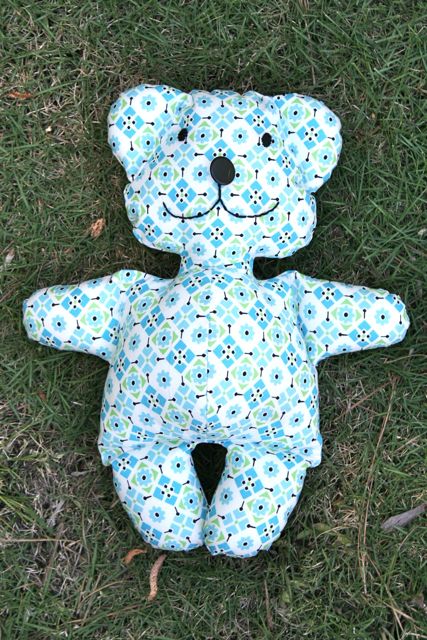 I love her.  And, as luck would have it, tomorrow our youngest needs to have a teddy bear to take with her to school, so I get to look like the coolest mom in the whole class (for once) and send her in with this lovely, handmade one!  Woot! 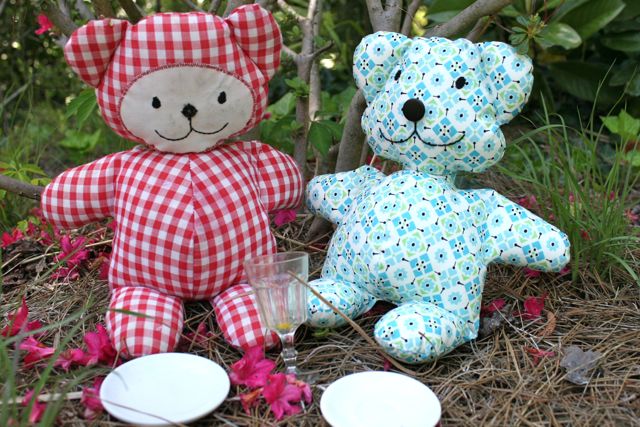 I don’t know what it is about the shape that appeals to me so much–probably the pudgie little belly that does it, really.  Or the way the arms stick straight out on both of them–so cute! 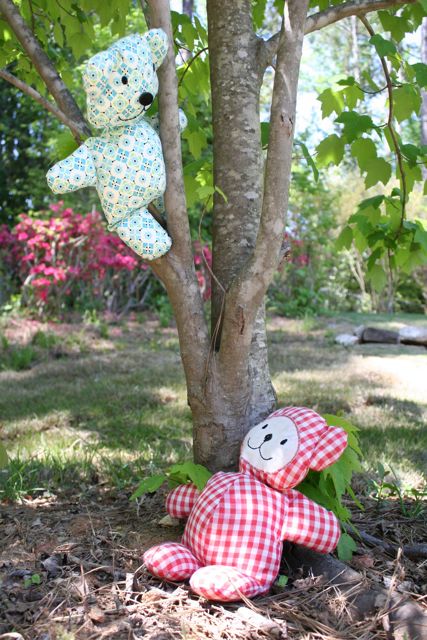 And one of the mysteries of the sewing universe: how can such a simple face, so easily embroidered with the most basic stitches, be so evocative and have so much personality?  Isn’t that funny?  The actual vintage one, on the bottom, was even embroidered with simple thread–not even floss!  I used six strands of floss for the new vintage-look one, on top, and neglected the oval face (d’oh!), and still it’s just as sweet as can be.

Before I made this version, I made a prototype to test out the pattern I’d sketched based on my own, vintage bear.  I wanted to draw a new pattern that was as similar to the original in all my favorite ways as I could, but that would take on its own attitude.  The kids STOLE the prototype, no lie, and I couldn’t get it from their sleeping clutches.  How’s that for a hit bear? 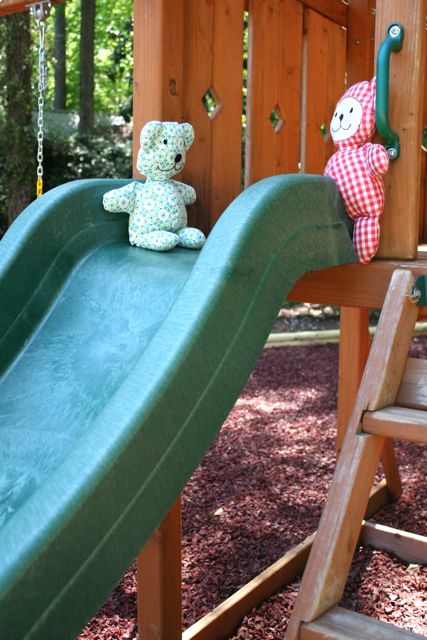 So I kept this version under wraps until I could at least get some pictures of it!  We went out in the yard today and let the bears play.  They don’t really stand up or pose very well, so some of the little scenarios I had in my head didn’t quite play out, but for soft floppy toys, they sure do some cute stuff.  I can only imagine what the children will have them doing in short time.  I would never have predicted that I would get so excited about seeing my kids so excited about something I sewed–but man, that’s one of the best parts of owning a sewing machine, if you ask me. 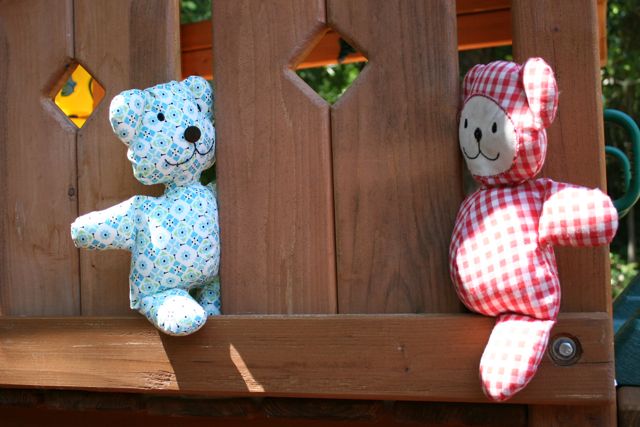 I’m working on putting this pattern into PDF format to share with you all, along with a nice step-by-step, if you’re interested?  This was a quick, simple sewing project that took around 45 minutes, including stuffing and hand sewing.  Would make a really swell baby gift or way to burn some summer daylight and keep the kids occupied when they’re not in school! 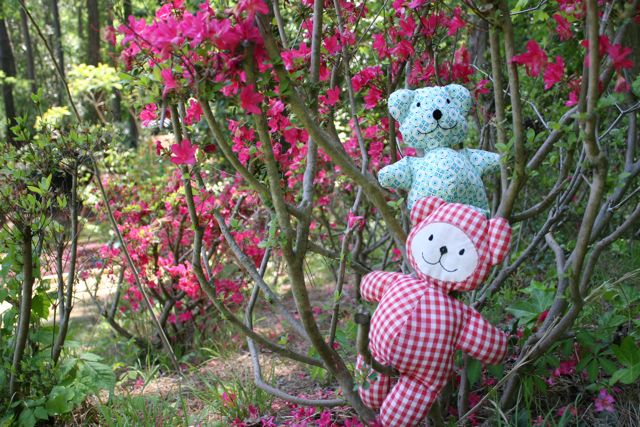 I think I might have to play with the zoom on my printer, too, and make some of these in other sizes.  Good grief, they’re funny and sweet!  I love those classic toys–who needs some horrible Bratz doll when you can have a teddy who’s happy to see you, am I right? 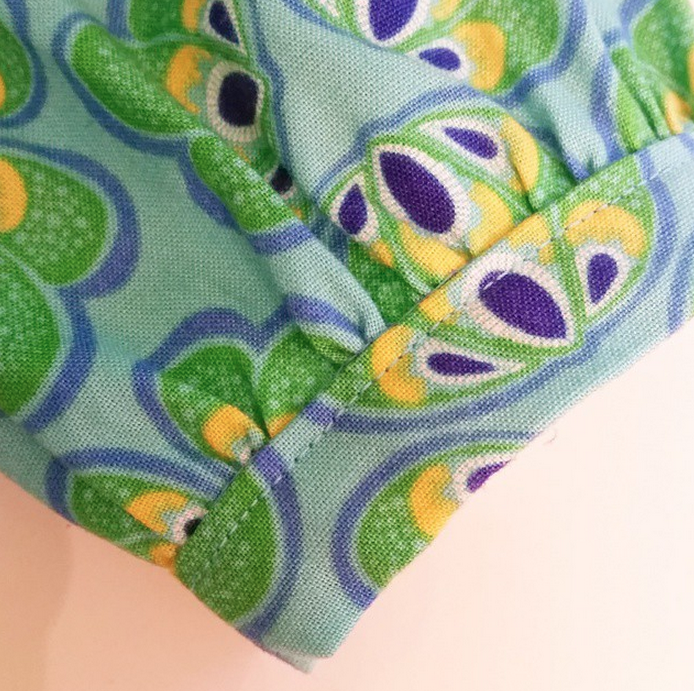