Pants Are For Every OTHER Day

This is the fourth post in a series about how getting dressed, even when you’re only going from your bedroom to the living room and back again, can have an enormous impact on your mood, your sense of self, and how well you handle stress and change.  I know very well the temptation to wear only stretchy pants and sweatshirts when working from (or just staying) home; I also know the insidious ways in which giving in to that temptation ate away at my ability to fight through mental fog and maintain a healthy headspace.

I learned through trial and error, by working from home over the past ten+ years–and then, as the result of some dark days, actively altering what I wear over the past two years–that there are some basic guidelines I can employ when getting dressed each day that give me the tools and the margin to intentionally improve my outlook and mental health.  I’m sharing them here in hopes they’ll create a framework where we can have a bigger conversation about how sewing our own clothes allows us a window through which we can feed our hearts and minds.

For the introduction to the series, visit this post, and for a deeper dive, join us at the League of Dressmakers, where we’re developing this topic in greater depth, complete with silhouette guides, sewing pattern suggestions, video discussions and live chats! 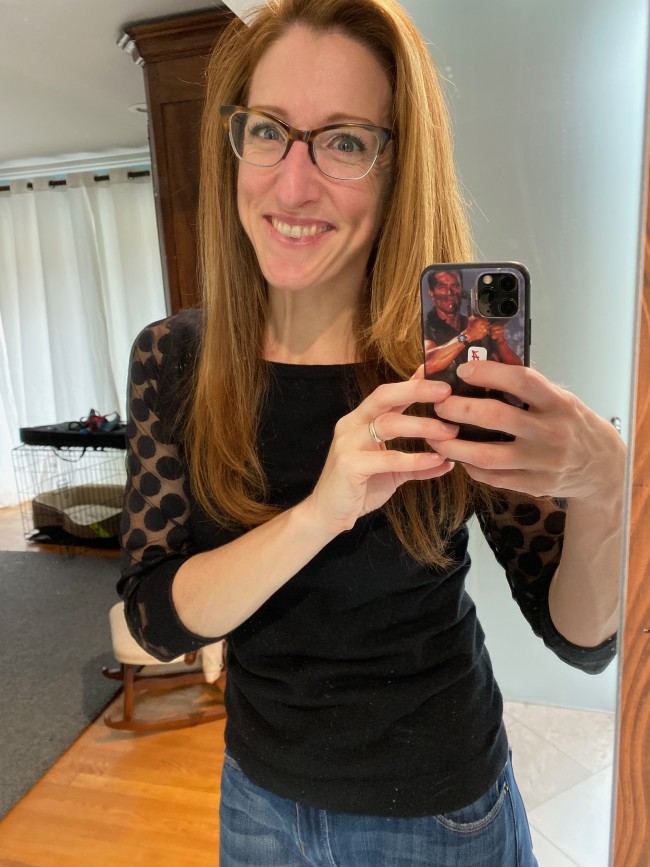 Once I moved jeans out of my every day rotation, I found it a challenge to avoid the trap of simply replacing jeans with a different fabric, and still basically wearing the same uniform every day: cords or khakis plus a tee and a cardigan might be a step up, but not way up.  The temptation to lean into resistance, to avoid change or to simply revert to old habits, was strong–and it would have been so simple to swap out non-jeans-pants and check that box.

But by this point, I am way past box-checking. I’m seeing such an impact from these small changes that I don’t want to give them up.  I’m not interested in a diet, the old school version where you stop eating until you lose weight, then go back to “normal” after; I want GROWTH, sustainable and reproducible growth, the kind where more effort begets more results without a sense of scarcity or sacrifice.  Giving up jeans may have felt like a sacrifice had I just switched to wearing some OTHER kind of pants, so I needed a mechanism for keeping the SILHOUETTE of my wardrobe varied, not just the fabrics. 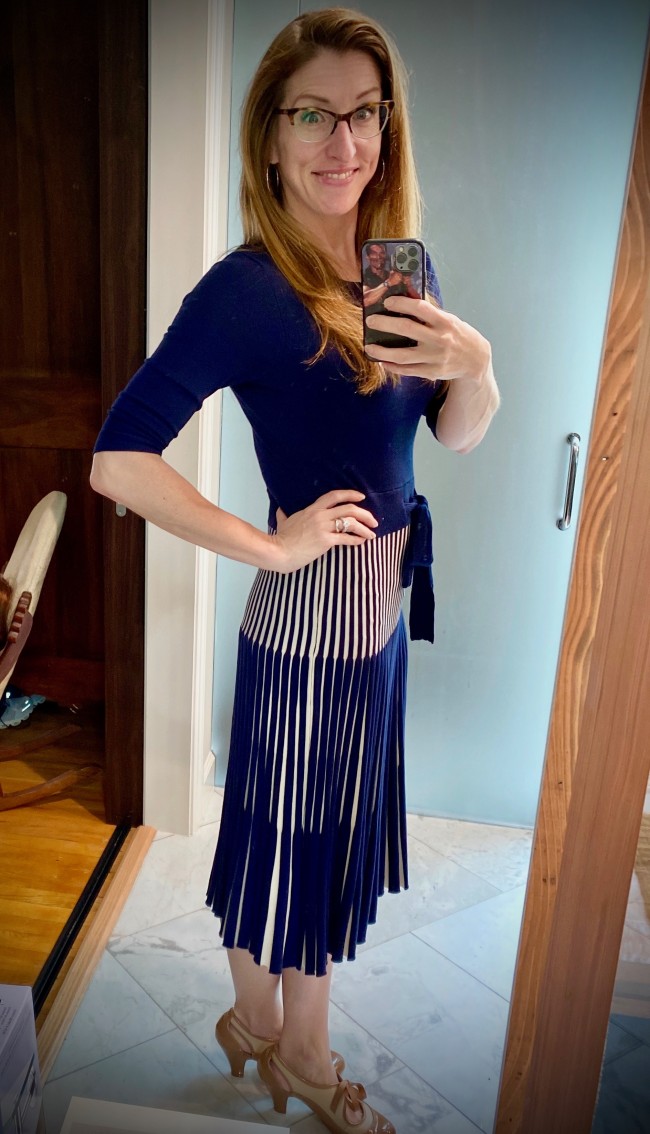 The next guideline fell into place soon after: never wear pants two days in a row.  To repeat, these “rules” developed SLOOOOOOOWWWWWLY, over the course of nearly two years, so this didn’t come about as a conscious, white-knuckle, I’m-gonna-do-it-this-time-I-mean-it decision, but rather as a musing experiment that worked, and since it worked, I kept doing it, and eventually what started as a hypothesis became a theory which has became a law that has made many returns for me.

This idea of wearing pants no more than every OTHER day was an effort to avoid ditching jeans and leaning into different pants, which would have satisfied the letter of the law, except that’s not what matters here.  It’s the spirit–MY SPIRIT.  And what I needed to avoid was (1) laziness and (2) repeating the same silhouette over and over. 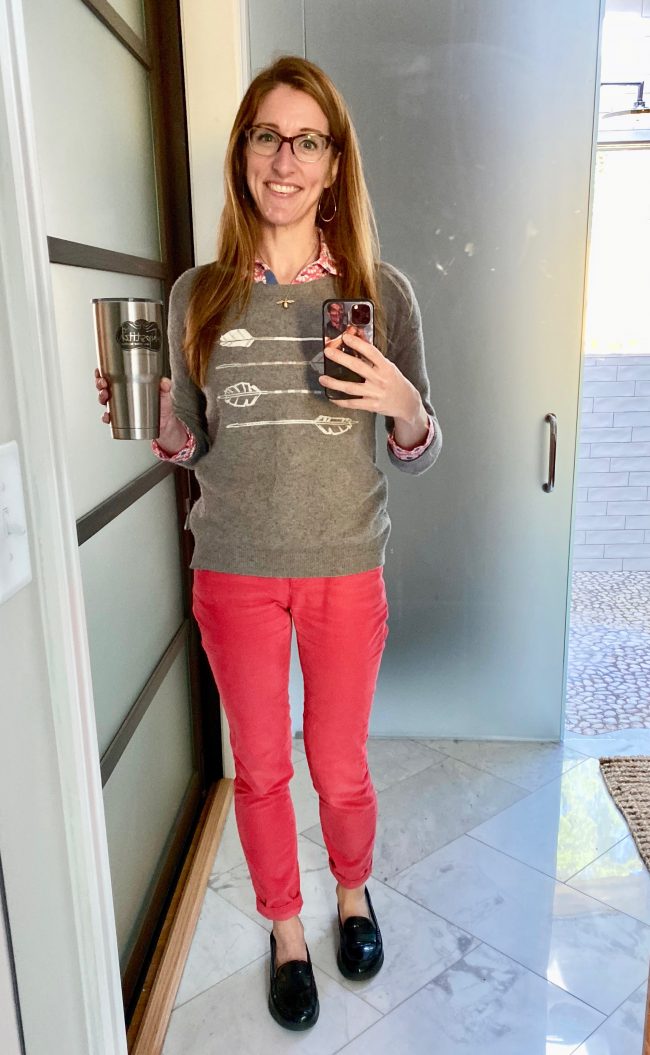 Silhouette is so important to me when I get dressed, turns out.  Silhouette and BALANCE.  These two ideas–the first, that the OUTLINE of my clothing creates a shape that can emphasize or minimize my natural form; and the second, that volume in my clothing needs counterpoint to make an impact, so a full top works best with a narrow bottom, etc–really came into focus for me as I looked back at the daily photos I was taking.

Even those weren’t planned, I just started sending my husband a selfie taken in a full-length mirror each day, and as they accumulated, I noticed patterns that I then explored, first for fun and then FOR SCIENCE.  I began to see the way I most like to combine separates (skinny pant with a boxy top or loose pant with a fitted knit tee) and what dress shapes I prefer (nipped-in waist with a full skirt or fitted skirt with lots of texture).  I didn’t SET OUT to create variation, I watched it emerge by looking at the photos where I LOOKED HAPPIEST.  I figured, if I can SEE that these clothes make me feel good, then I can feel good MORE OFTEN if I can re-create the shapes.

That translated very strongly to my sewing, as well.  I know that some patterns I’ve made in the past were great designs, but I HATED the finished project.  I’ve analyzed some, but there were others where I was really stymied and COULD NOT figure out why I hated what I’d made.  Looking at these photos reminded me that I should, as Audrey Hepburn famously did, eliminate a lot of patterns as a matter of course simply because the silhouette wasn’t one I like to wear.  This feels a little different from choosing based on body type; it’s choosing based on…joy?  And asking my clothing to be a tool, not a magic wand.  I choose the tool based on my desired outcome, I don’t just wave my needle at the fabric and hope it all turns out OK.  It’s EMPOWERING. 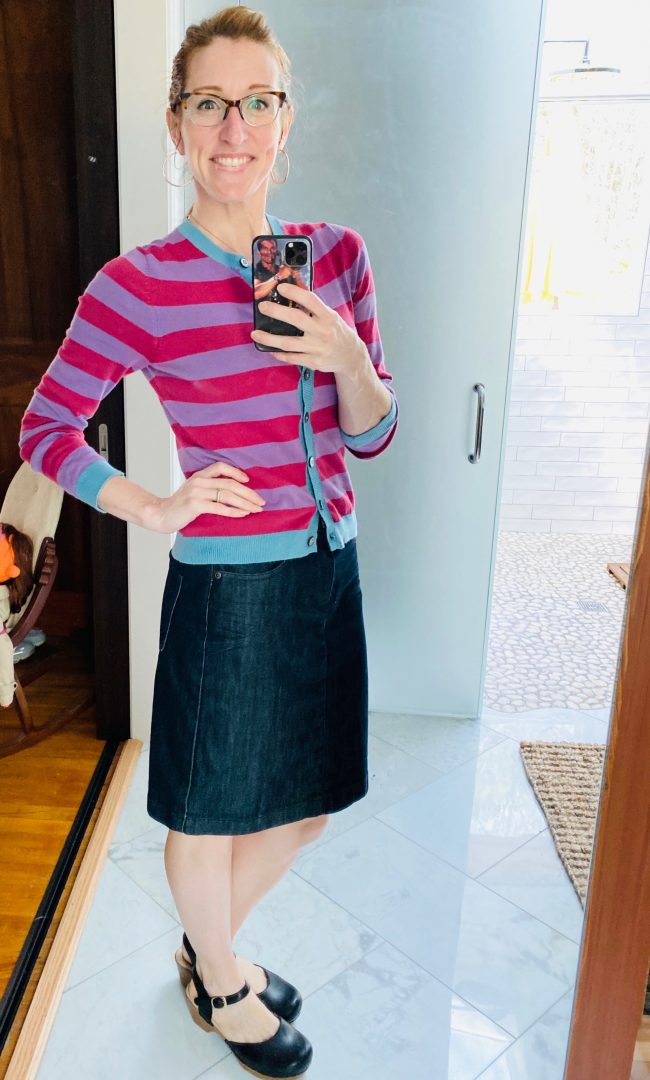 As a practical matter, skipping the jeans and wearing pants only every other day means each morning I shower, get dressed, put on makeup and even heels.  Some days it’s a dress, others it’s a skirt and tights, but it’s more often one of those than it is pants.  I always choose accessories, jewelry at a minimum but I’ve been known to throw on a scarf or decorative belt, for kicks.  I do my hair.  It’s a Whole Thing.

It felt really goofy at first, wearing a dress with heels to…walk to my basement and “go” to work.  Like, my vertical commute is longer than my horizontal one.  And there I was, blowing my hair dry and putting on mascara and pulling up my tights to head to my desk in the basement.  My fancy shoes sound so much louder on the hardwoods than slippers do.  A couple times my husband even asked me, “Where are you going today? You have a meeting?”

Nope. Just headed to the basement.  Made me think of the scene in Back to the Future where Marty wakes up and doesn’t recognize his brother: “Marty, I always wear a suit to the office.”

Pretty quickly, though, that came to be Going To Work for me.  It didn’t feel so silly, it felt like I was headed to my office, like the work I was doing was worthy of the time I spent preparing for it, like I AM WORTHY of the time I spent, getting dressed.

And I keep thinking, here in quarantine, of the tweets and posts I’ve seen where folks are leaning into wearing sweats and yoga pants–or no pants at all–almost by default, without thought, as if it’s the Most Obvious Thing.  And, y’know, I taught school for a decade, I had to get dressed in Professional Work Wear every day, I don’t deny that as soon as I started working from home I was all, “Hoo, boy! Ain’t never wearing THAT again!”  I’m speaking from the other side of a decade of that, though, to all the folks for whom this feels like freedom: IT’S A TRAP. 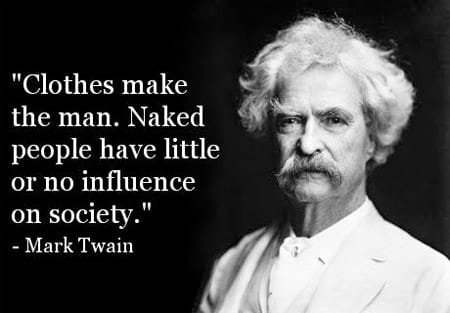 It’s not that the clothes THEMSELVES matter, but based on my empirical evidence gleaned from over ten years of working + mothering from home, I can report back that my outsides reflect my insides, and they IMPACT them, too.  We begin to believe what we tell ourselves, and what I wear is a story I am telling about WHO I am and WHAT I’M WORTH.

If you want to ease your way in with pants every other day, and NO pants on the off days, rock out.  That’s cool. If you want to argue with me and tell me I’m way off base, that’s cool, too.  Feel your feelings, yo.  I’m digging the Getting Dressed jam HARD, though, and my suspicion is that as we settle more deeply into quarantine, we’ll either burn the sweats or they’ll burn us. 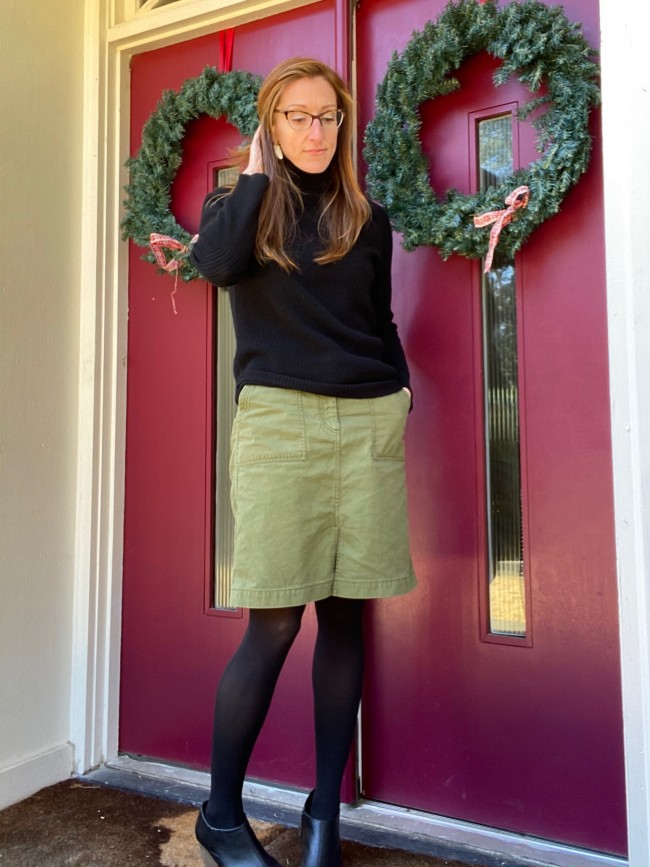 That’s extra true for anyone working from home.  Feeling more professional and prepared and invested in my work day leaked into the volume of work I was producing, and the amount of intentionality and investment I had in what I was making here.  I discovered that as I showed up at my desk, dressed with intentionality and deliberation, I was allowing myself more lead time, more editing time, more margin for deadlines.  Did you catch that?  It sounds like I spend more time on grooming than I did in the past–because I totally do.  But rather than that setting me BACK in productivity, it INCREASED how much I get done. I am dreaming bigger, and connecting dots that allow me to complete large-scale projects in bite-sized pieces. 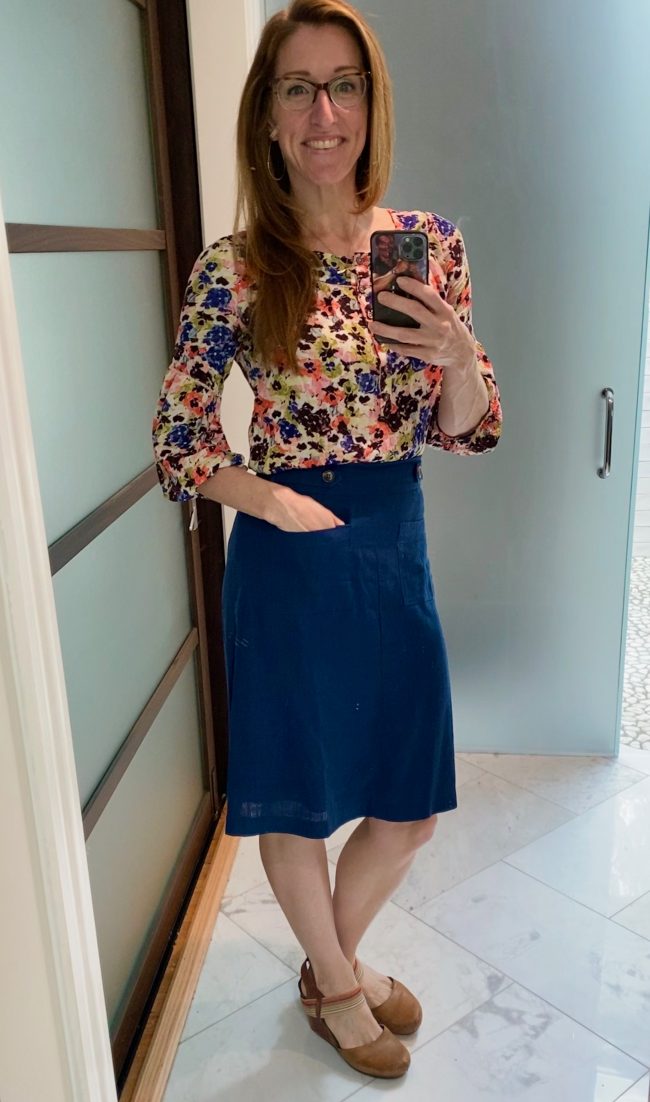 I know.  It sounds unconnected, like, are we sure it wasn’t getting into counseling that made the difference?  Are we sure that Brené Brown Ted Talk didn’t maybe have more impact than you thought?  Well, no, we’re not sure.  But I know I like how I feel now, I like the work I’m producing, I take bigger risks and I’m way more compassionate with myself when I fail.  Call it Brené Brown or call it the clothes, I don’t care.  I’ll take it.

There’s a lot more to say about all these ideas, and I’ve developed a lot of them into a conversation for the League of Dressmakers.  We talk about silhouette, balance, fabric selection, and which patterns can be used again and again to create a closet that’s an intentional reflection of the best parts of you.  We would love to play with you over there–learn more here about the League!

get dressed to stay home
2 Comments

Time to Study Up for a Sewing Quiz!