Solve Crime in the Ancient Pyramids in 2020! 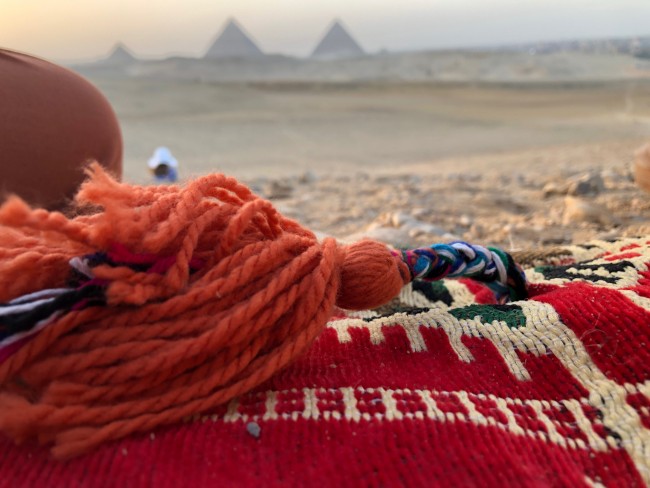 When I dreamed up the Murder Mystery Quilt, I never imagined even for an instant all the places it would take me.  Around the world, it turns out.

The short origin story of the Murder Mystery Quilt, when I tell it at cocktail parties to people who don’t sew and who think quilts are something they dig out of Gramma’s closet or see in a museum display, goes more or less like this: there’s a product in the world of quilting where portions of the quilt are sewn without ever seeing the finished design, like making a puzzle without the box top lid, but the word “mystery” always made me think, “If I’m going to make a quilt and not know how it’ll turn out, I should at least be solving a MURDER mystery!”  And thus I developed the idea of sewing a quilt to solve a crime.

I launched the project in late 2015, and I don’t really know what my expectations were.  Pretty low, if I’m being honest, but that may have been a little fear-of-failure talking, because I’ve always thought it was a clever, whimsical idea, and I know there are LOTS of clever, whimsical people who sew and love to read books.  I have found the very best of them through this quilting club, and it has grown beyond anything I envisioned, becoming not just a monthly subscription, but also a deep, kind, warm, welcoming, generous community that makes every member feel supported and encouraged as the year goes along. 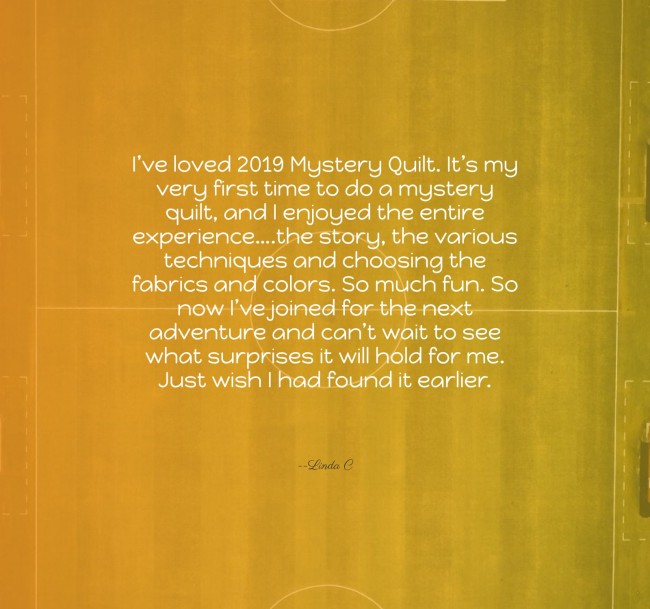 The comments members send are an unexpected balm for my heart some days.  I did not plan for this group to mean as much as it does to so many of us, but it has made for better quilters, and also for better neighbors and better families and better friends. 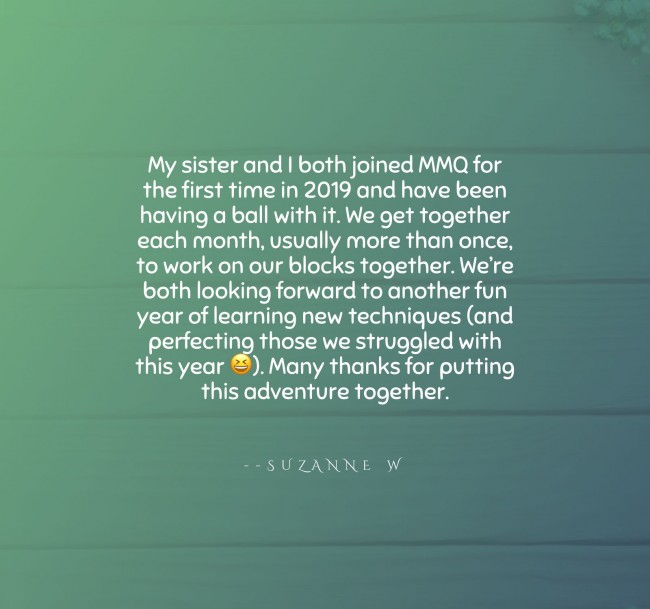 In 2018, when the wildfires hit California, the Murder Mystery Quilters banded together to re-make the blocks that three of our members lost when their homes were destroyed.  When they ran out of blocks to sew, they kept sewing, for weeks–eventually making nearly 100 quilts to donate to the local schools for distribution to children who had lost their homes and their daily lives.  It was completely amazing to be part of a community where individuals felt so bound to one another that they cheerfully pushed aside their own schedules in order to do something kind for others–and thanked the group for giving them the chance to do it. 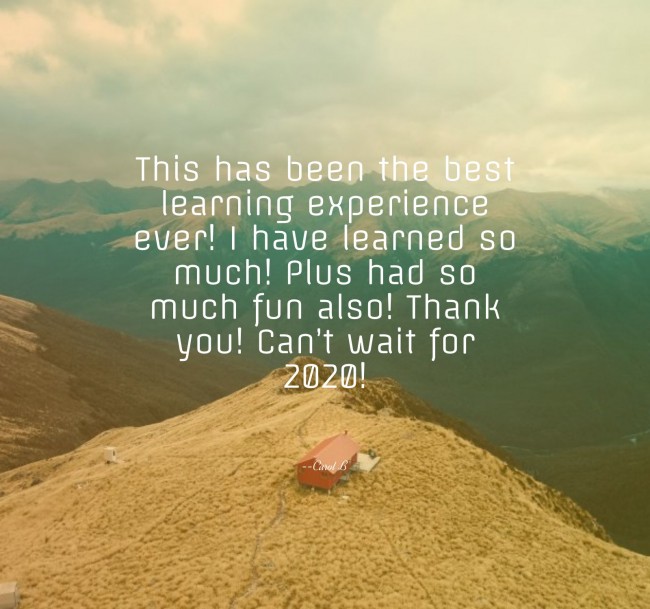 I also didn’t know what a tremendous boost the MMQ would give me creatively.  I get the chance not only to dream up quilt designs, but to create an entire fictional world populated by imagined people, and then link the two.  It’s challenging and engaging in a way that I haven’t found in many other places, and it makes me proud and happy and humbled and excited when I get to share it. 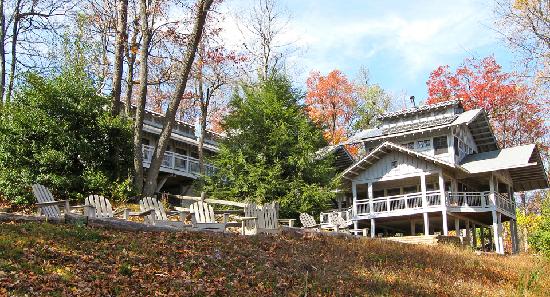 That first year, the mystery I wrote to accompany the quilt design was set just north of where we live in Atlanta, at a place called the Hike Inn.  It’s remote and you can only get there by hiking (hence the name), and was the perfect serene but possibly-spooky setting for a “tea cozy mystery,” which has a limited number of possible suspects and where a detective can get suckered into solving crime, even when she’s not really qualified–a description that suited both my protagonist and me at the time. 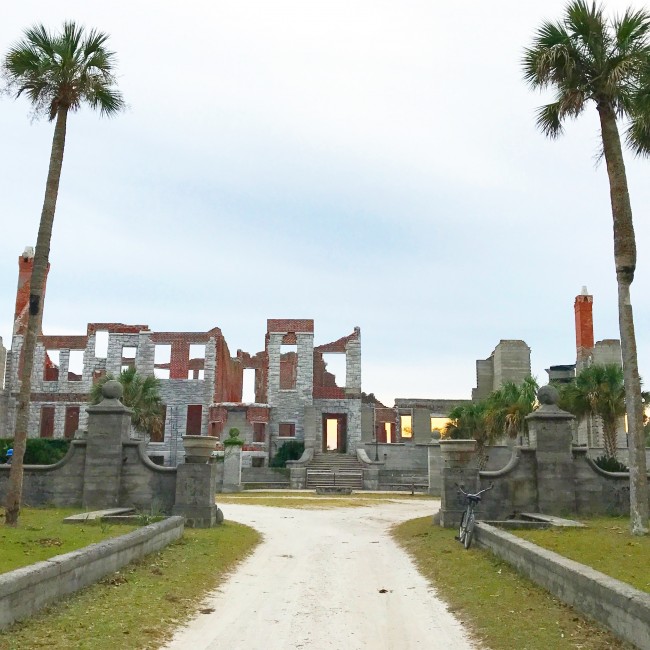 The next year, we ventured further along the Georgia coast, to a barrier island called Cumberland Island.  You can only get there by ferry twice a day, and the ruined buildings of the ultra-rich from a hundred years ago spill across a sandy beachscape populated by wild horses.  It was a delectable place to visit and research for the purposes of writing a murder mystery.

The third year, the novel and quilt were set in Jamestown.  Since my protagonist is an archaeobotanist–the area of archaeology in which I specialized when I was in graduate school–it was fun to travel to one of the most famous American archaeological sites and imagine how a small group of professionals might find themselves in very hot water there.  Layer in our damaged heroine’s proclivity for picking locks on the most unlikely doors, and Jamestown was a rich world to mine for story material and quilt design. 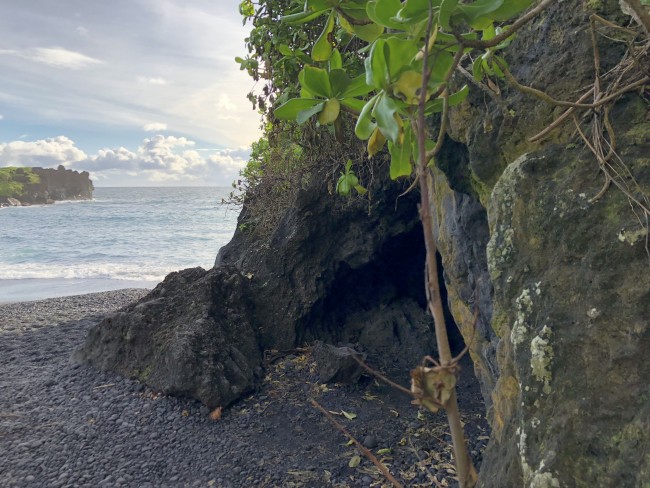 This year, we have been on the island of Maui.  The colors and textures of the islands make for an absolute dream for any quilt designer, and have allowed me to create a puzzle quilt for our members that has been a true joy to witness unfolding.  Traveling to Maui to see the volcano and the flora up close was inspiring and surprising and uplifting in ways that translated directly to the emotion of the story and the quilt that goes along with it. 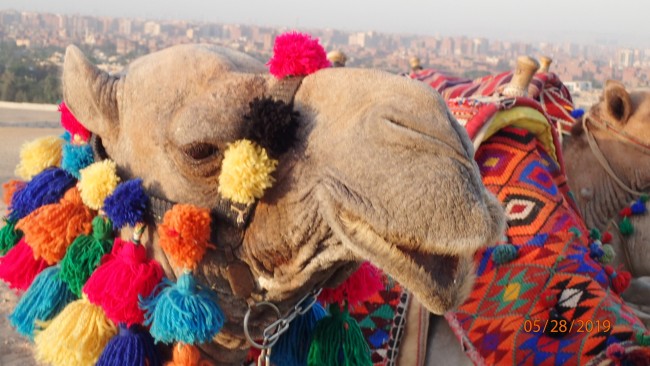 Next year, we will be taking the Murder Mystery Quilt to a place that six-year-old me dreamed of but never really believed would be a reality for me–maybe a little bit like grown-up me felt about the MMQ to begin with: we are headed to Egypt.  We spent ten days in the land of the ancients last summer researching the landscape, the colors, the textures, the flavors, the scents and the peoples of the desert, and it was spectacular. 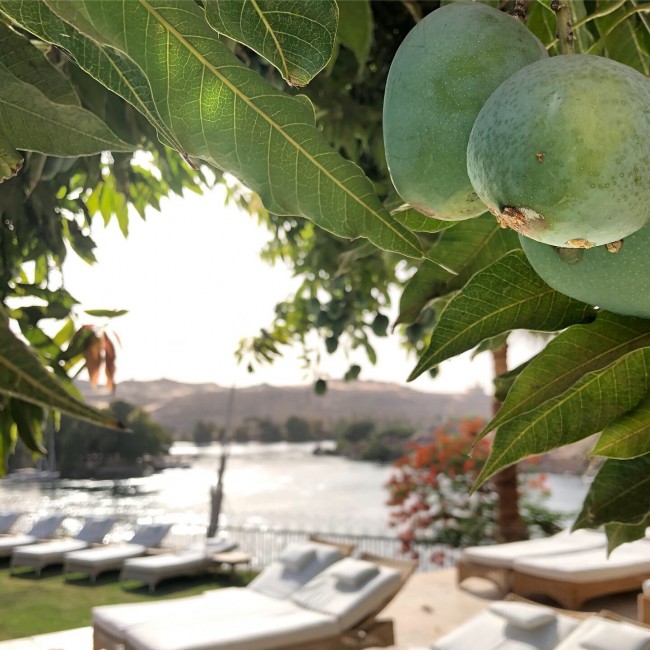 Researching these quilts is magic.  In Egypt, we explored the Cairo Museum and we crawled through the Great Pyramid and we leaned our heads way, way back to look up to the tops of the columns in Karnak Temple.  But we also had long conversations with locals who understand more about Egypt than just the Ancient Egyptians, we visited the mosque and learned about modern Islamic Cairo, we spent time touring with an Egyptian Egyptologist and discovered that the entire country is basically one massive excavation waiting to be opened up.  All of that ended up in the story, in one way or another–not just the place, but the people.  And it shows up in the quilt, not just the colors but the vistas. 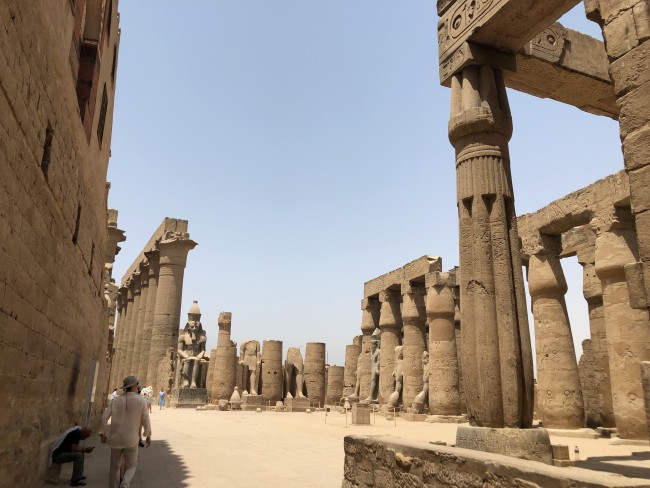 I am so grateful for the chance to see parts of the world that fascinate me, and to translate those into quilts that every member can make their own as they sew along with us each year.  The community we have built together is filled with smart, thoughtful, funny people who are eager to help one another and to form friendships over reading and sewing–it’s just my dream group, and I feel absolutely honored to be launching it again for another year!

You can learn more about the Murder Mystery Quilt on our site, and you can JOIN TODAY.  We start our first quilt block for 2020 on January 11, so you have plenty of time to sign up and collect your fabrics, meet new friends, and get excited about spending the year solving crime with us.  I can’t wait to sew with you! 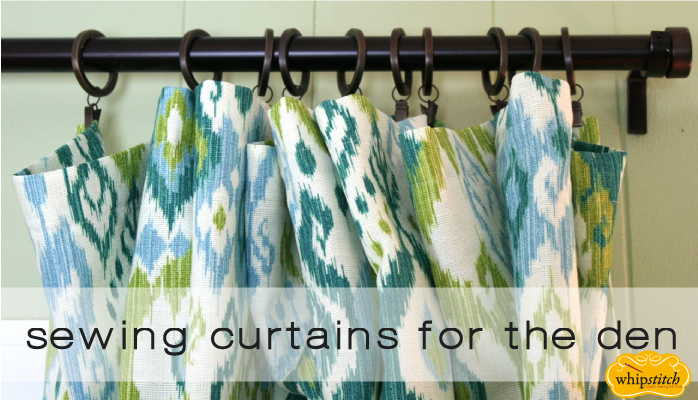 Curtains for the Den

Curses! And hooray! But also: curses!