I think in my head, this was a Grand Reveal.  But my husband was away all last week, and when he got home on Friday evening, I hurt his feelings by suggesting that I might move some furniture around in our teen’s room while the younger children slept.  As soon as the words left my mouth, I knew it was a dumb idea–I mean, honestly, why would I want to move furniture rather than spend the evening with my husband whom I’ve been missing for days and days?  A sad statement on my one-track mind.

So rather than having “all” the pieces in place, I bring you instead photos of the bed and linens and bed skirt and pillows all set up in her room, along with some mentions of what’s yet-to-do. 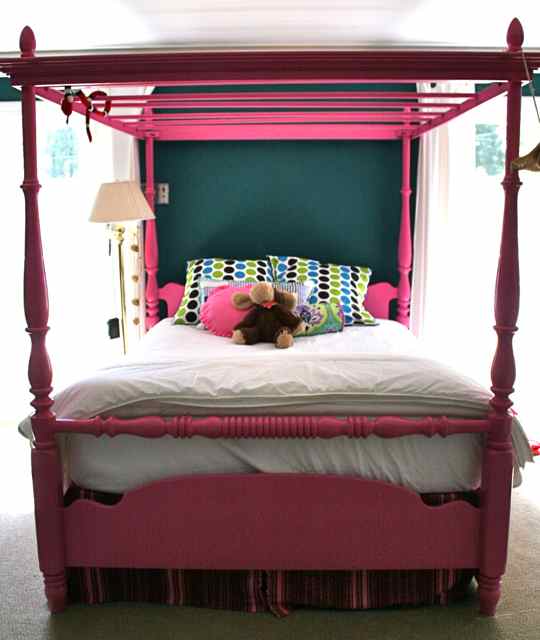 The bed turned out so well.  I think leaving it sit for two+ days between each coat really made a difference, because while I’ve painted other furniture before and had a hard time with it being slightly tacky after, this is perfectly cured.  The color is delicious, especially in mid-morning light, and it works really well with the peacock walls.  These walls are the color they were when we purchased the house–the ONLY wall space in the entire building we’re leaving unchanged–and it was this color that inspired me to go for something so bold on the bed.  Something about the brightness and the contrast really appealed to me, and made me want crisp, white linens like crazy. 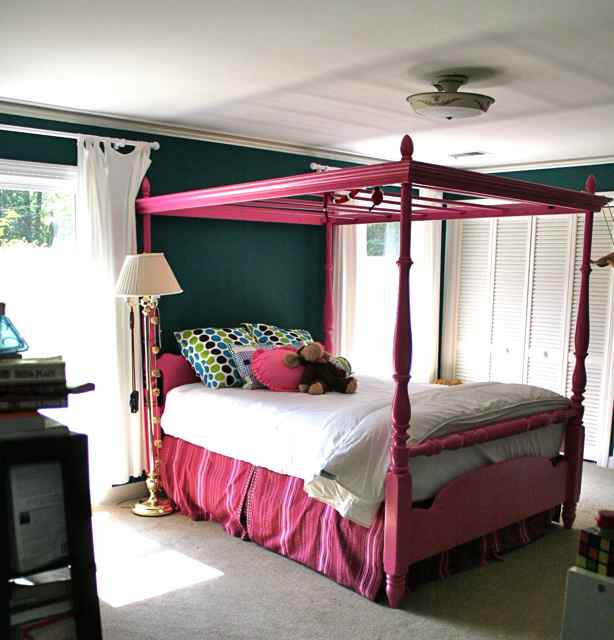 When you enter the room, this is the view: you come through the kitchen and past the laundry area–which is really just an alcove next to the door leading to the garage that has bi-fold doors to cover the washer/dryer–and then there’s a door to this room on the left, facing the front of the house.  I think it was designed to be a guest room, originally, but could just as easily be a “teen suite,” as they say these days, or a nanny suite (if only).  It has a private (small) bath and two large (reach-in) closets.  The other bedrooms are all at the opposite end of the house, with the kitchen/den/hall between.  It’s basically a teen paradise. 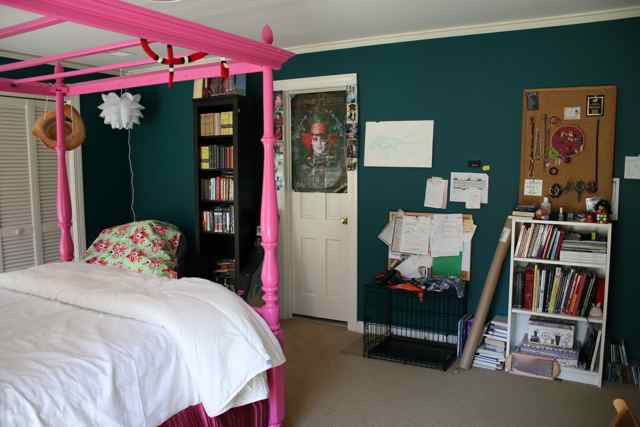 The carpet is new, since the carpet that was here previously was the original carpet and was…oh, I can’t even talk about how gross it was.  Really, really icky, totally had to go.  Since this room is the only part of the house that’s on the same slab as the garage–the rest of it is over a basement–there are no hardwoods here.  My husband went and picked out the carpet all on his own, and arranged for install and delivery the day before we moved in.  He’s a peach.  Here you can see the door to the bath, plus the attendant clutter of Teenagerius maximus in her natural habitat.  I’m no neat-freak, but man, the itty bits and pieces make me NUTS. 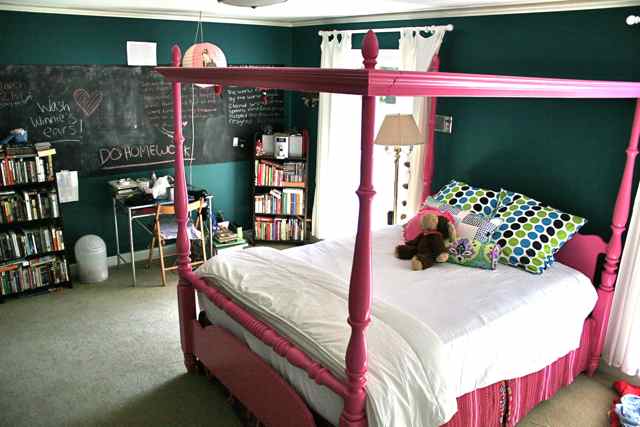 One wall is almost entirely covered with chalkboard paint, which she did on her own.  Initially, she only did a small, poster-board-sized section on the right, near the window, but when she put her desk where it is, it looked really odd, so I encouraged her to make it BIGGER.  Because you’re only 16 once.  She likes to add notes and calendar dates in the evenings, and since this wall is the reverse side of the dining room (which is currently my studio space), I have panic attacks twice a week thinking something is living in the walls and mounting an attack.  It’s really just the scratching of the chalk, but it flips me out every time.  Jeez, Mom. 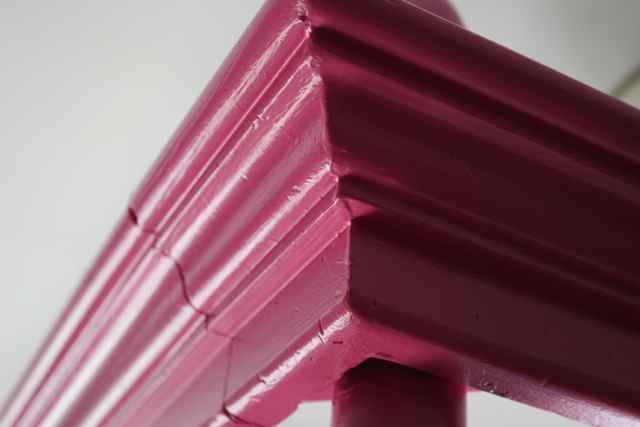 The bed is by no means perfect–it’s older than I am, for heaven’s sake.  But I really love it, and more importantly, so does she.  It’s super cool, and I’ve never seen anything like it.  When the mattress was delivered, she was at school, and came home with a friend of hers.  Both girls stopped dead in the doorway, whooped, and then took off their shoes and jumped on it, squealing.  It was nearly tear-inducing to be a mom at that moment. 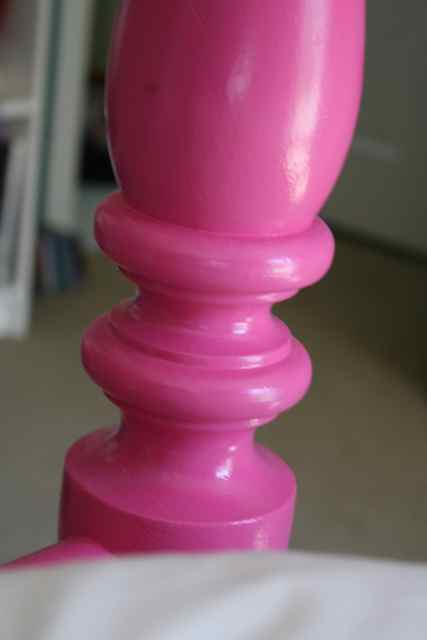 I mean, they TOOK OFF THEIR SHOES.  If that doesn’t make you cry, I don’t know what will. 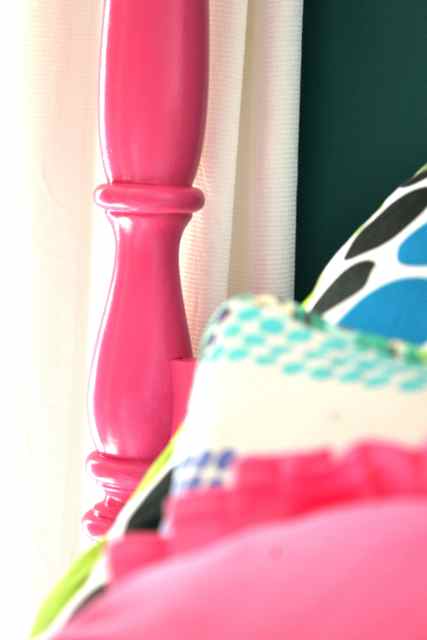 I think the pillows are fabulous, and love, love, love the pink one.  Which is funny, because it was a late-season addition, and is actually made of the same pink fabric I used to make a pair of Perfect Pants for our five-year-old–I happened to have juuuust enough to squeeze out this pillow plus ruffles.  And it’s a star on this bed.  The duvet, on the other hand, was to be out of a really nice, soft gray tone-on-tone silky stripe that I got ten yards of for this express purpose…and I hate it.  I made the whole thing, and the gray just has too much of a yellow undertone.  It doesn’t play nicely in this bright, light space.  So we’re going to move that to my blue-and-gray bedroom and see if we can make it work there, instead (pics later, I swear).

There is still plenty left to do:

The slip cover is complicated a bit by the fact that now that I see the whole room together, the fabric I originally chose for the chair in the chair in the corner won’t work at all (even though I have ten yards of it–eeks!).  But I found another colorway of the same print–currently draped over the chair–and I think that will be perfect, for now and for later.  When she moves out.  [Sniff.] 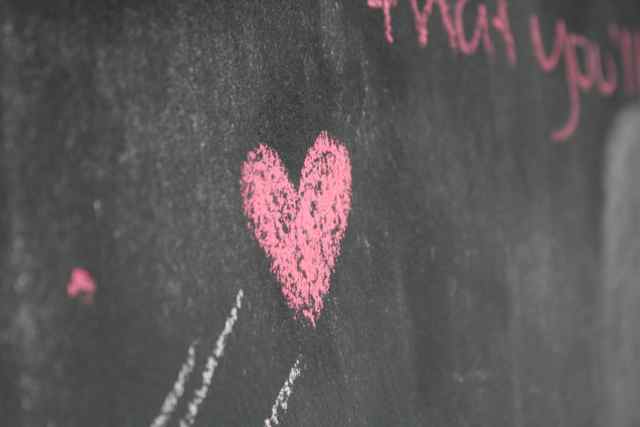 I Wonder Why I Do This, Any Of It

Now OPEN for Registration: The Murder Mystery Quilt & the League of Adventurous Dressmakers!