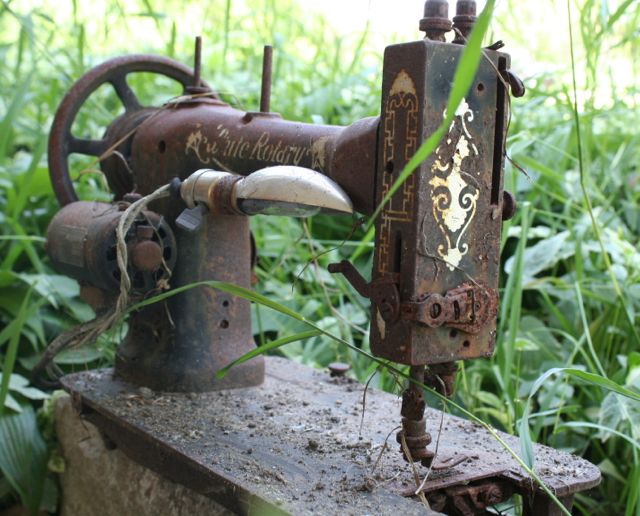 Oh, Camp Stitchalot.  What can I possibly say that would sum up how glorious this past weekend was? 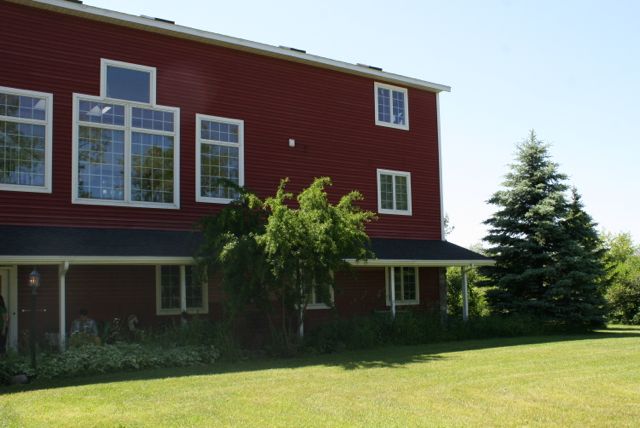 In a red barn, in the middle of the Michigan countryside, in two sewing rooms filled to bursting with folks who love to sew, we all hung out and made stuff and drank a bit (maybe a bit more than strictly necessary) and talked ourselves hoarse and made new best friends.  Like being a guest in a dear friend’s home, but with 35 other folks who love what you love and want to get to know you over their machines.  Amazing. 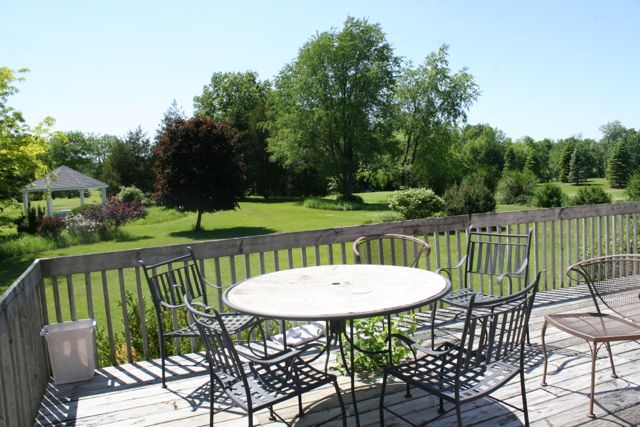 There was hand sewing on the back deck.  Actually, I’m not sure anyone did hand sewing out here besides me, when I spent two hours one morning soaking in the cool breeze and the warm sun.  But isn’t it the dreamiest place??  It saw plenty of chit-chat, though, and that view was to DIE for from inside the barn, with its giant floor-to-ceiling windows.  Incredible light for sewing by! 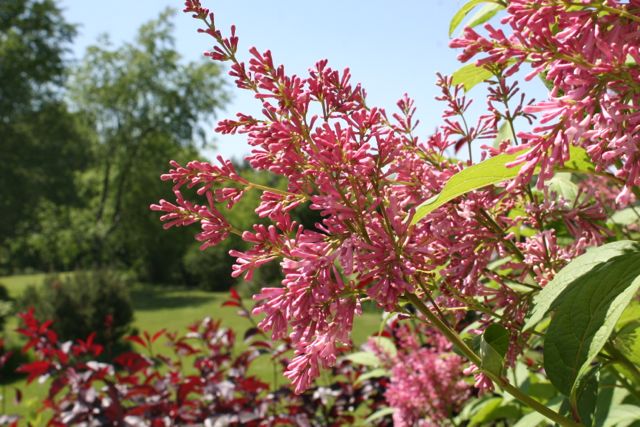 And all of Michigan seemed like it was in bloom–except maybe the peonies, which were a week away from bursting open.  There are a bunch of little buildings scattered across the property, each with rooms for guests, so we all had the chance to walk past flower beds and wind chimes while we were there.  Plus, it meant that when we were called to meals (walk across the parking lot!  food will appear in front of you!!  No work, no worries!), we all manufactured a little more vitamin D than you might expect for a three-day indoor sewing retreat.  Score!  Camp Stitchalot is good for you! 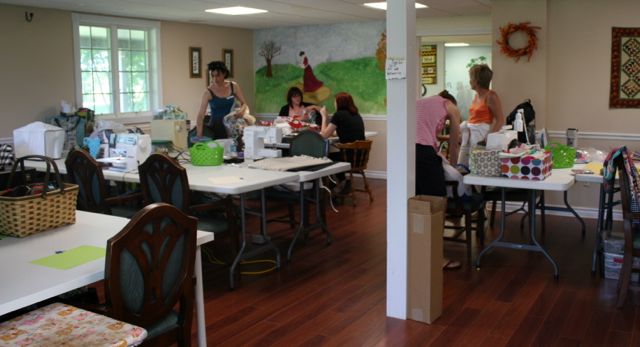 The sewing rooms were the perfect size–plenty of space to spread out, but even with my rapidly degenerating hearing, easy to hold conversations and really get to know people.  Plus, there was plenty of moving about between the rooms, so we all really got the chance to see one another and check out what everyone else was sewing–and then around 7 pm one night, the Sew Together Bag craze hit, and suddenly scads of ladies who had only just met were all sewing the same project side-by-side.  See what the internet can do??? 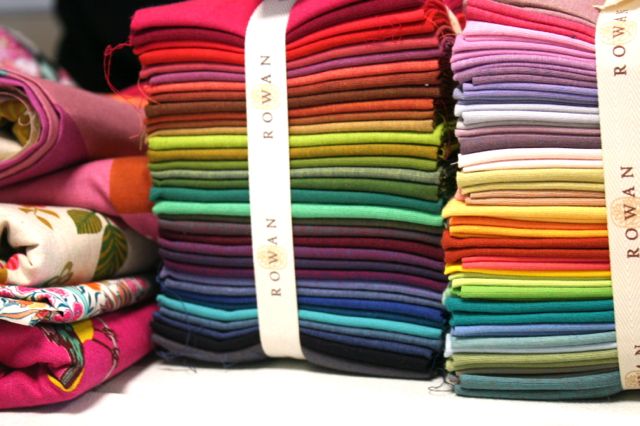 Folks brought absurd amounts of fabric–eye candy to ogle and fondle.  Yum.  I felt like I seriously under-packed, but Brenda was smart enough to host a pop-up shop in another building, so anyone in need of a break from sewing could go browse and pick up supplies.  Which worked out great for me–I got some projects done that needed doing, and the ladies who wanted to join the Sew Together Fever were able to score some zippers, all by walking out the door to the next building over. 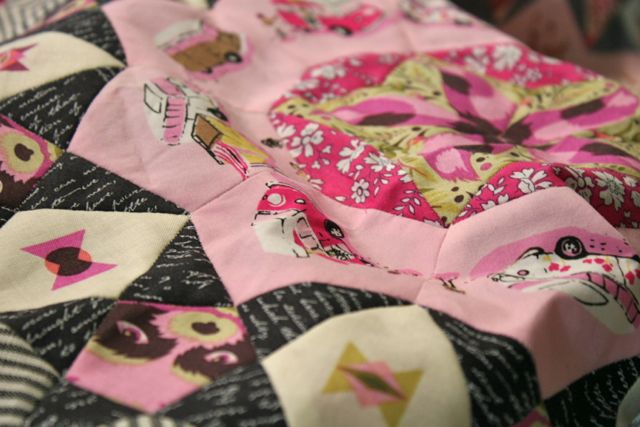 I can’t even talk about how fun it was to see all the projects folks were showing off.  This one is Tula’s on-going just-for-me project, the perfect thing for working on at a retreat–and it fit right in with the vast number of English paper piecing projects that were going on–not least of which was the Mason jar EPP pin cushion project Katy gifted to each of us while we were there.  So fun. 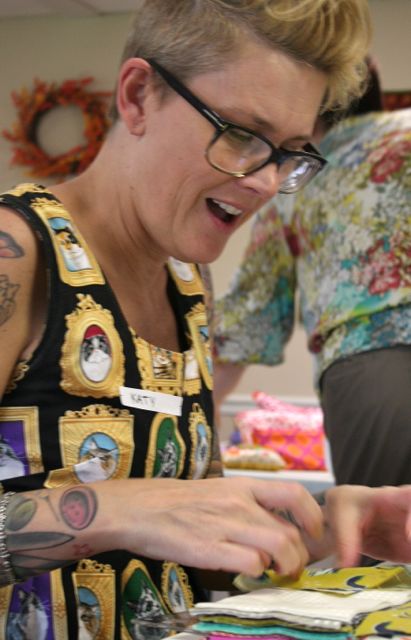 See how happy Katy is??  And this was just the early bird day BEFORE the first day.  It just got BETTER from here. 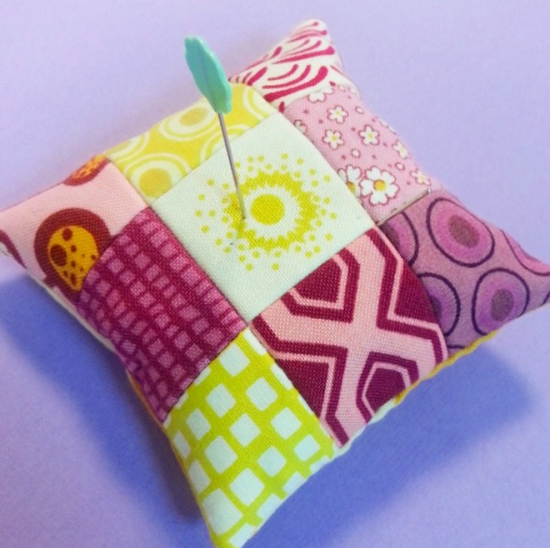 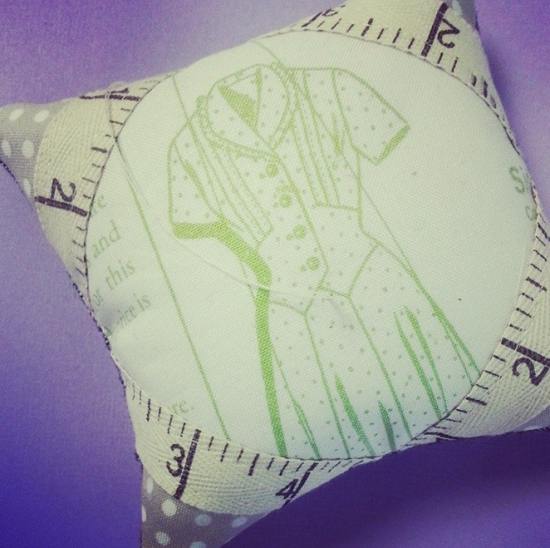 I even got these two sweet, sweet pin cushions as gifts from campers–can you believe that??  I am constantly overwhelmed by how kind and thoughtful sewing folks can be.  (Giant shout-out to both Lee and Kim for these sweet treats!) 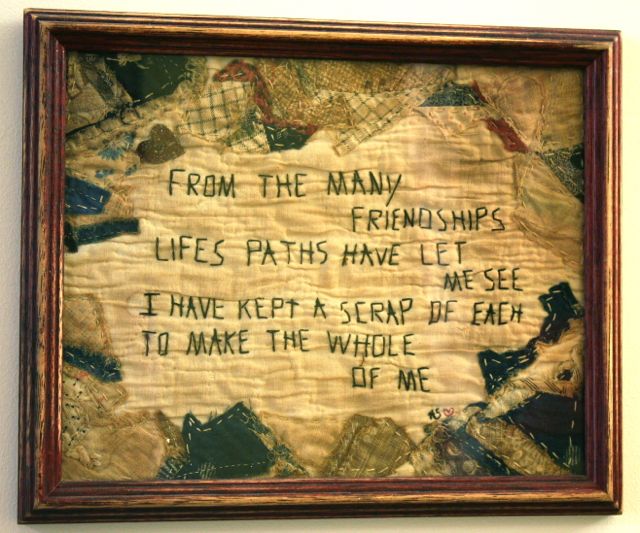 This was hanging in the stairwell of the barn.  The owner of the inn, Jan, is a quilter herself, and the whole property reflects her love for needle and thread.  And the sentiment of this piece really hit home for me on that final day as we were all packing up our things to go.  I’ve had a lot of jobs over the years, and many of them–school teacher, children’s clothing designer–sound like they’d be filled with kind and loving individuals who have the best interests of others at heart.  Which made it all the more distressing to learn that they were bitter, back-stabbing, gossipy harpies.  I have said for years and will say it forever: you won’t find that with sewing people.  Because sewing people are the BEST people, the kind who always have something kind to say, the kind who are generous and funny and smart and interested and who delight in bringing joy to others.  Camp Stitchalot embodied that for me in such an incredibly tangible way, and ended with hugs and genuine friendships that had bloomed over shared meals and late, late (latelatelate) nights sipping wine and talking until our bellies ached with laughter.

HUGE thanks to Pink Castle Fabrics for inviting me as a counselor at Camp; to Katy Jones and Tula Pink and John Adams for being the absolute coolest people and allowing me to be mentioned in the same breath as the three of them; and to the Hankerd Inn for providing us with such awesomely quirky surroundings where we could all relax and play until we were exhausted.