Wow, who knew the world was so hungry for a soft toy block tutorial??  Thanks, y’all, for the link love and the comments and emails!  They’re fun to make, and great to give–I had some girlfriends and their babies over on Monday and showed them the samples I showed you, and thought they were going to squeal out loud when I gave them each one to take home.  One girl DID squeal.  What else can give you that feeling of satisfaction and pride and generosity and of being flattered all at the same time except sewing a handmade gift?

In the same vein, I have three more projects to show you today.
First, the First Sight fabrics from Michael Miller, which make not only adorable soft toy blocks using the same tute, but are also geared to help your baby’s cognitive development with their high-contrast colors and bold shapes. 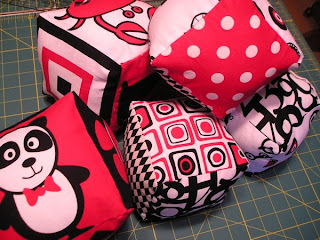 These are made from the First Sight charm packs currently posted in the shop.  The smaller blocks are made with charm squares, and the larger ones are made using the blocks from the First Sight panel fabric–since those squares measure 6″ x 6″ the finished blocks are naturally bigger, as well.  I like the two sizes together, and might have to exercise some restraint if I hope to save a set of these for my sister’s new baby–we just found out it’s another boy at their house, and I’d love for him and our boy to have matching Cousin Toys.  Assuming that’s a real thing, which it probably isn’t, but I think you see where I’m going here.
Next is the Turnover Soft Toy Block, made with the new Snippets Turnovers from Moda that came in yesterday.  Turnovers, like charm packs, are a precut product: 80 triangles cut from 6″ x 6″ squares, in 40 prints. 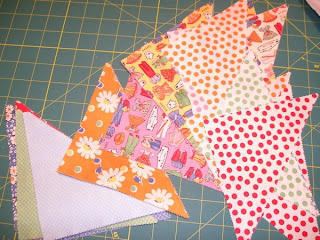 Great for traditional quilting and making square blocks, which is how I’ve put them to use here.  By stitching the triangles together along the hypotenuse (and you thought I was writing notes in math class!  Shame!), we can make a square and then treat the square just as we would the charm squares for the soft toy block pattern. 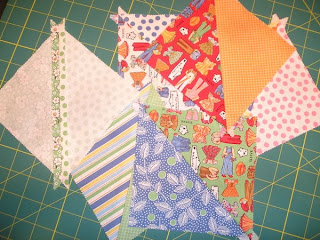 Adorable!  Plus, this 1940s-inspired paperdoll and pattern fabric is pretty much to-die-for. 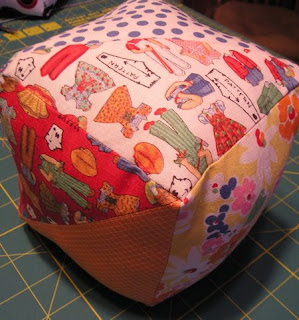 Finally, TODAY’S TUTORIAL!  Well, OK, it’s still really the same tute.  But with another twist.  I guess I figured between this and the turnover, two twists=a new tutorial.  Or something like that.
High-contrast Juggling Blocks! It occurred to me as I was making the First Sight toy blocks that the high-contrast colors would also be great for dogs (has anyone else noticed that the main difference between baby toys and pet toys is where you buy them?).  I felt guilty for comparing our babies to dogs, so I tried to re-direct my thoughts to OTHER things that high-contrast fabrics are good for.  Having been traumatized in high school by being forced to learn to juggle (“All actors need to now how to juggle, it’s an essential skill”–look, Ma, NOT an actor now!), this was a solid bet. 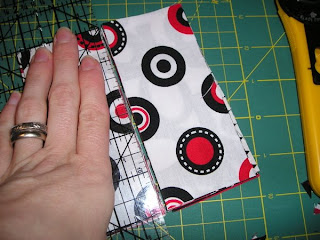 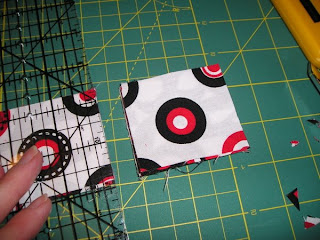 Follow steps 1-10 in the Soft Toy Block tutorial.  These are slightly more challenging than the larger ones simply because of their scale, but the construction is the same.  Oh, and I filled them with split peas for weight–lighter would be harder to catch, right?
There were a couple questions about the leave-the-needle-in-and-pivot step in that one, so I’ve taken brighter, more detailed photos of that:
Stitch one charm square along one edge of the open-ended box made by stitch four squares end-to-end.
Stop at the seam line, leaving the needle in the fabric. 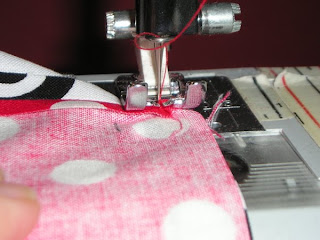 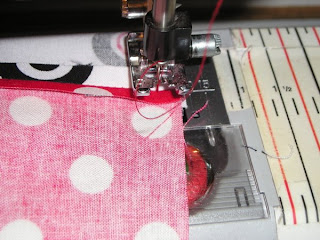 Turn the fabric on the needle, pivoting to line up the next row of stitches. 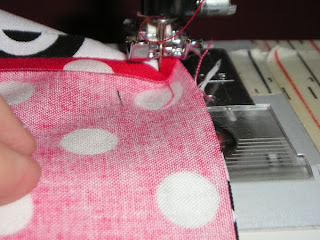 Lower the presser foot, stitch to the next seam line. 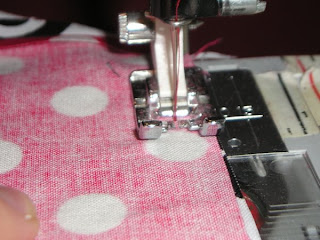 I’d share a photo of me putting these juggling blocks to good use, but the truth is that I failed my juggling test by quite a large margin, and the shame haunts me to this day.  My hopes are much, much higher for all of you.
baby toysblockscharm packpre-cutstutorials
1 Comments 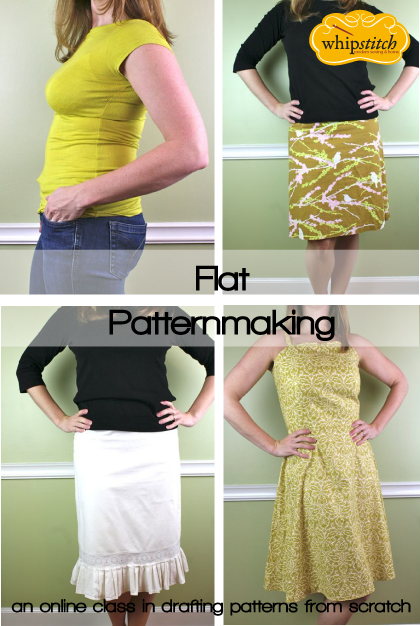