Floor Cushions for the Den 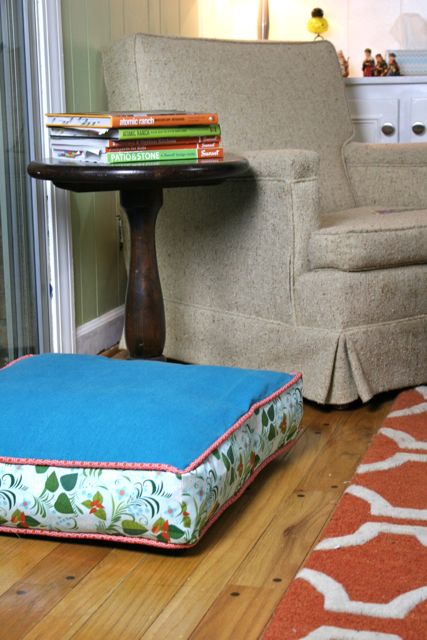 In our den, we’ve got a small-ish sofa (about 5.5 feet) that we bought vintage from Craig’s List.  There’s the small chair you see in the back of this photo (along with a matching ottoman, which we also found on Craig’s List for an absurdly reasonable price), plus two slipper chairs that my husband bought before we were married, all of them similar in color: a clean, neutral beige-y tan.  The rug, which took me a short eight months to decide upon (harumph), is a rich orange with cream accents, chosen because of the way it brings out the warmer tones in the bar stools that sit across the room, where the divide this space from the kitchen (I did choose the ikat zigzags, after all!).

I want to brighten the room by adding some pops of color, and to add more functional seating for a family of six who like to have guests.  The day before Thanksgiving (because that is how I roll), I started finally cutting and sewing these giant floor pillows to do just that. 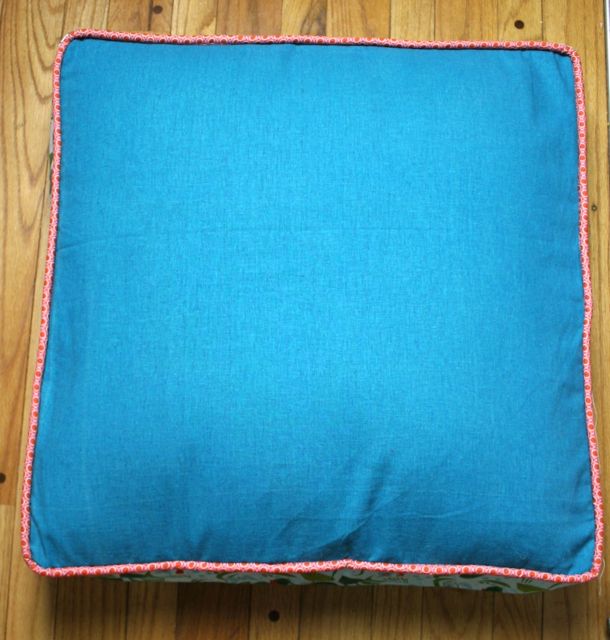 I wanted them to be large–like, 24″ x 24″ so that the children can plop on them and we can stack them up like a side table (like this), and so that they’ll bring plenty of color and texture into the room.  Originally, these were going to be in the Lizzy House print that I bought to make the den curtains–we decided that was too MUCH color for this room, so it’s not going to be the curtains, but I still love the print, and thought it would be great as a floor pillow.  But the truth of it all is this: I don’t love having tons of pattern in a single room.  I know that folks like Anna Maria and Amy Butler have this amazing gift to take these disparate print and colors and combine them all in the same room to stunning effect, but honestly, I find it all overwhelming.  I like solid colors and a tight, cohesive palette.  I suspect that makes me boring and risk-averse, but I am, in point of fact, risk averse.  So. 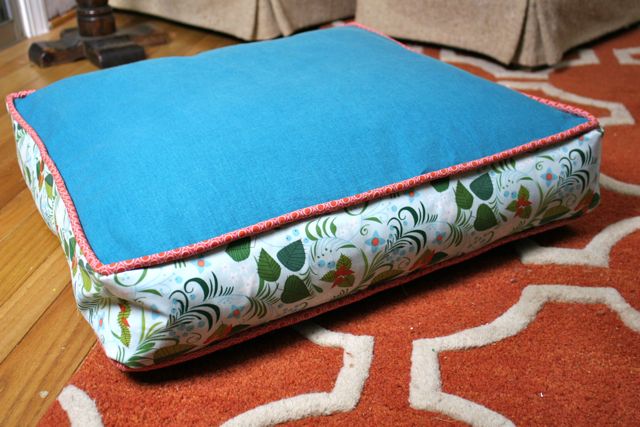 What that meant for these pillows was that a print was out–four square feet of print is a lot in one room.  Instead, I decided to use the print as the boxing on the sides of the pillow, and dug around in the stash for a solid.  Paydirt!  I had some of this fabulous Robert Kaufman linen/rayon blend put away from about 6 years ago when I was designing children’s clothing–I used it originally to make little girls’ dresses with these adorable Peter Pan collars that had itty-bitty pleats in the edge, like piping, but pleated.  Anyway.  Linen!  It’s only, like, my FAVORITE fiber!  Plus, the color was flawless with the Lizzy House.  Only drawback is that linen, especially this rayon blend, doesn’t always want to take a beating the way I anticipate these pillows will take a beating and still retain its shape. 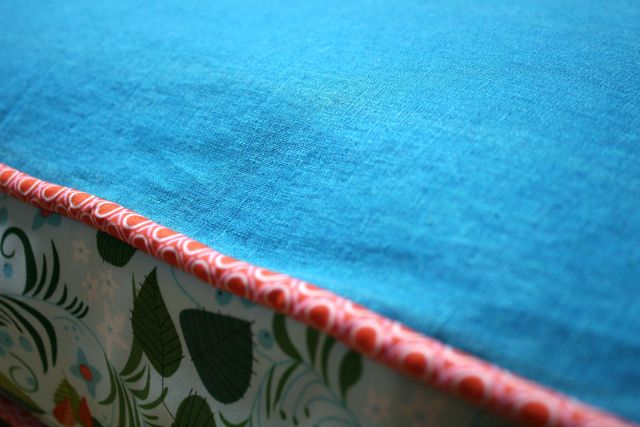 Lucky for me, I had made a bad order online for some muslin.  What I thought I was buying was your basic Roc-Lon muslin for pattern drafting, on a 25-yd bolt.  What I was actually buying was a super-extra heavy-duty muslin that’s way, way too thick for draping patterns.  But since I’d bought it, and knew I needed to make a bunch of bed skirts, I figured I’d use it for the base of those rather than for clothing.  And then this project came up–the muslin is plenty thick enough to support the linen, and help all the fabric retain its shape.  Each of the pieces for this pillow are basted to another piece of muslin before the pillow was assembled.  I think that’s what makes it have so much body and stand so well. 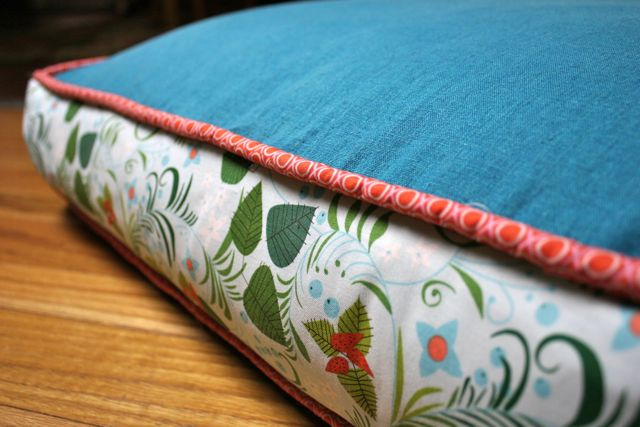 The stuffing is just two bed pillows, the super ultra-cheapy ones from Target.  Four dollars each!  And since I’d bought all the fabric for other projects, and used a zipper I already had on hand, this pillow cost me just $8 before tax.  Considering I’ve seen plenty of other floor pillows that I like about half as much in colors that are about a tenth as good as these for upwards of $65 each, these were basically an awesome steal.  The piping is from Anna Maria’s Field Study collection, but I only had a half yard of this print–so the other pillow will be the same color piping, but in a different print.  Matching, but not. 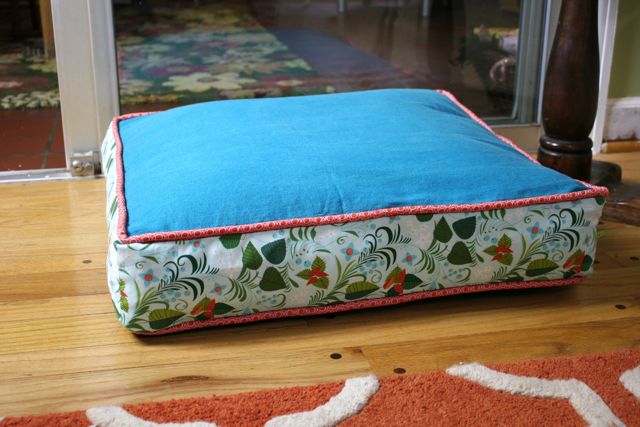 The other thing I love about these fabrics together, including the piping (which as far as I’m concerned is the detail that makes the pillow, along with the little carry handle on the side), is the way they tie this room in with the playroom/sunroom beyond.  The rug in the den is this delicious orange wool.  The ones in the playroom are an awesome green wool floral, with lots of yellow, orange and lime mixed in, all very muted and tasteful.  My mother gave us two as a Christmas gift last year when we first moved in–they’re both 5′ x 8′, pushed side by side to make a huge play area for the kids.  Between the two is a sliding glass door; the floor in the den is hardwood and in the playroom is terra cotta tile.  The den rug references the colors in the playroom rugs, which I love, but somehow the colors in the pillow really tie the two together in a way that makes me feel as though this house will someday soon actually come together.

One more pillow this size, then perhaps a smaller one with some natural-colored linen.  I’m planning to stack them on top of one another, at the ready, for when we have guests or the kids want to build a fort.  Nothing says cozy home quite like having enough places to snuggle up! 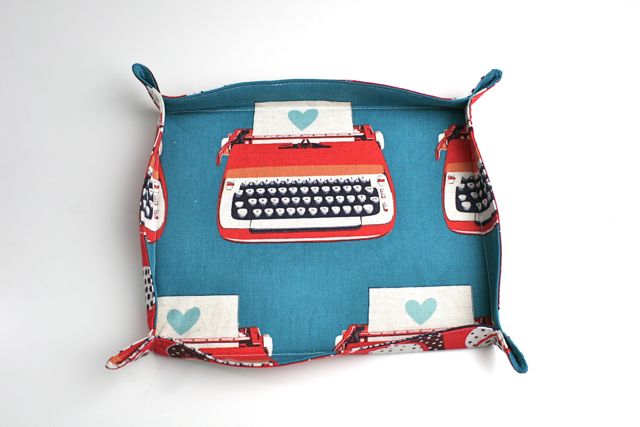 Fabric Basket for the Desk 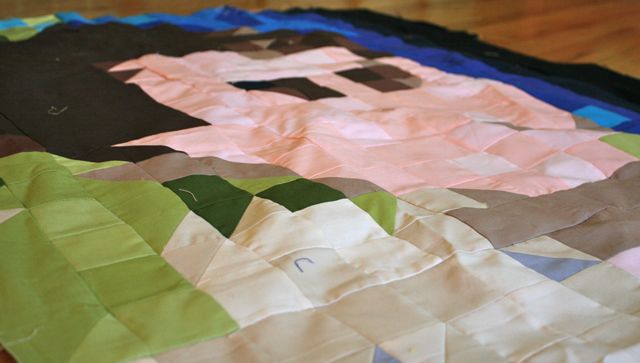