I Wonder Why I Do This, Any Of It 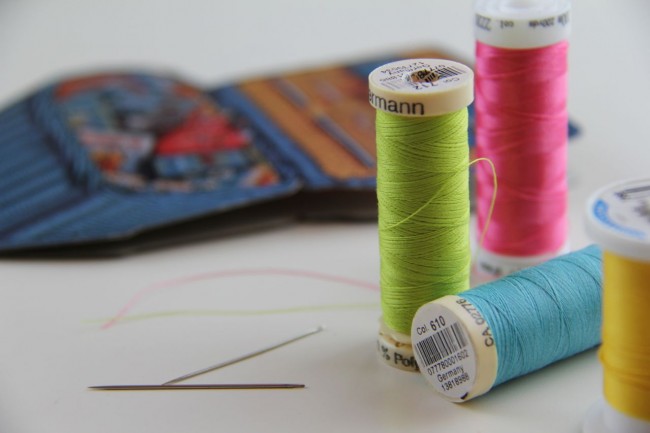 I sew, a lot. Way more than normal people–and by normal, I guess I mean the average person, who probably doesn’t even know how to sew, making that an unfair and inaccurate comparison. So maybe I just sew way more than most people who sew–which would be a massive amount, because sewing seems to attract the obsessives, the folks who really like to DIVE IN, the ones who don’t just try something, they DO it, in the purest Yoda sense. They don’t think, “I might try sewing,” they go to the store and they buy ALL THE TOYS and ALL THE FABRIC and they get home and THEN they figure it out. Or maybe sewing makes us all obsessive, we didn’t start that way, we became that way because the POTENTIAL is so enormous that it’s difficult to look away from the bright light of possibility that comes once you learn how to thread that needle and make it go in a straight line.

And so: I sew. A lot. And perhaps obsessively. I am, to one degree or another, always thinking about sewing. ALWAYS. It has ruined shopping for me, there’s no doubt about that. How many garments have I seen in a store that I thought, I can make that? Or even: I can make that BETTER THAN THEY HAVE. Why would I waste my money on something that’s overpriced and poorly made by small children with no access to education in a sweatshop half a world away and then transported by burning fossil fuels to be sold at an absurd price to a whole population who do NOT need more stuff? I am a bargain shopper by nature, and so I would never pay full price anyway, but even at TJMaxx prices, sewing has made it difficult for me to justify garment purchases nine times out of ten.

And that’s even if I needed more stuff, which I most assuredly do not. I have a closet bursting. I have drawers that would be overfilled if I ever put away the folded laundry all at one time and could see that they were overfilled, rather than leaving the Everest of my wardrobe in semi-folded stacks at the foot of my bed, where they seem to perennially take up their residence, to be sorted through and rejected when I wake up in the morning, only to see me put only my favorite pair of jeans AGAIN. I don’t need more clothing. But still, I make it. And I dream of it. And I daydream of it. And I plan and make obsessive lists (there’s that word again), and I imagine and I compare notes and I peruse blogs and I talk to my friends about the sewing, the sewing, the sewing I want to do.

So: why? Why do we do that? What am I getting out of it, if it isn’t that I must meet a material need?

The ability to work with our hands is a gift. I’ve realized that outside of people, the things that I care about in my life are made by hand.

Something not material, then. Something emotional. Something visceral. Something TACTILE. I get something out of sewing that goes beyond the finished product, and I can feel that immediately, not a decade later like all the other things you figure out in life, but RIGHT NOW, as it’s happening, while my hands are on the cloth and guiding it beneath the needle. I can tell that it is happening: sewing is changing me.

What magic that is. Time stands still. My brain, oh, my brain that never, ever, ever shuts up–it quiets. Not to silence, obviously–I don’t want to be dishonest, with you or with me. But to…quiescence, that slowness that allows thought but prohibits editing, that lets the smaller voice that gets talked over and forgotten to speak up and be heard. The patient song that plays beneath the surface finally gets to be the melody, and it is just that: magic.

I am not at my machine because I need the thing I am sewing. I want it, totally–and that’s OK. I don’t apologize for wanting it, and I don’t preach that we should all only and ever make just the things we NEED, as if we are on the American prairie as homesteaders and must limit ourselves to making just the essentials so we might eke out an existence. Beauty is here, it is now, and it asks to be made known, and our hands can do that. Even on the prairie, they made quilts and they were beautiful–functional beauty, yes, but their making went beyond mere necessity and entered the realm of the soul.

I am at my machine because I crave the quiet, the focus, the tunnel vision, the ZONE, the Zen. I am there because what I get out of it starts with the planning and dreaming, with the endorphins released by the imagining, and it continues with the focus and the silence and the details and the specificity of my hands and my thread and my needles, and it culminates in the satisfaction of the final product, no matter what that might be. I wonder if I get the same level of reward from a set of napkins for the dinner table as I do from a dress I’ll wear to a party. I suspect I do. Maybe someday I’ll measure it, but the proof of it isn’t in numbers, it’s in the heart.

We can have anything we want delivered to our doorstep pretty much any minute of any day right now the way that the world functions. When we make things by hand, we can’t have it right away. And so we get to slow that momentum down just a bit.

There is a yearning in all of us to create, to make something that wasn’t there before. We see it in our children as we watch them paint and color and draw, at the pride that comes mixed with open-eyed surprise and unapologetic wonder that their own hands have created something NEW. We all create in different ways, even when you think you haven’t: making dinner, writing a letter, planting a garden, giving a speech, painting a portrait, shaping a sculpture, wailing at karaoke, warming a heart. It’s all MAKING.

I wonder, a lot, why I do this. Why I bother with Whipstitch, what it means and where it will stand in the world when I am no longer here to breathe into it. Maybe it will be nothing. Maybe it will be erased from whatever server holds it, in a place I will never see, in a form no one can ever lay hands on. Maybe. But my hope, my dream, my conviction, is that it will live on. Because things that are created have LIFE to them, and I become more convinced each day that it is that life we seek–that when we treasure and desire and value the handmade, what we are recognizing is the LIFE in it, and THAT is the gift. My focus as I sew means that a part of me is IN the thing I am sewing, and gets passed on in some way that I will never truly understand to the person who touches my work, to every person who touches it, even if they don’t believe it or think I am crazy cracker cakes for saying such a flaky, granola, out-there thing. It’s all REAL, is what I’m saying, and we are made to crave the real over the imitation. We are made for HEART.

It’s important to value what is good in the old, but you also have to create value for today.

That’s why I bother to continue to blog, and to teach, and to design. Making is a virtuous cycle, where what we give is given back to us, where spending the time and the energy doesn’t cost us in the same way that the math says it ought to, but instead builds in us MORE than what we have expended. The joy and the…well, the peace, right? that comes from a piece created beautifully, a job well done, is something I find in so few other places. And somehow, in sewing, that joy lasts longer.

If your mother cooked dinner every night, what you remember is that you mother cooked dinner every night–even though, mathematically, that’s improbable, and she likely took off a night here and there. You remember the amalgam of all those nights, with warmth and fondness. And then bits of that jump out: her amazing casserole that she only made for special occasions, or the yeast roll recipe that was handed down from her great-great-grandmother and was the highlight of every holiday. That is sewing for me. I remember my mother sewing, and my grandmother sewing. And there are individual pieces that jump out so clearly, something they made that I treasure that seems to summarize the feeling of being important enough that they would pour into me in that way. I want to offer that to my family, but also…also, I feel humbled and honored that anyone would see my time and my labor with such gratitude ON TOP OF the immediate joy I receive from the act of making. Sewing is changing me, making me more grateful, more patient, more mindful, more loving, more whole.

There are gloomy days where I wonder why I bother, and is it worth all the work and the words and the hours. But always, always, I come back to this: Sewing shapes a piece of me into a solid thing that I can share with you, in a way that only making allows us to do. This is love. And it is worth it.

(All quotes from Crafted, a very short film by Morgan Spurlock about people who make stuff.)