I haven’t really been a pattern tracer, up until now.  And possibly I still wouldn’t be, except someone made a comment on a post (I think this one, about notches) saying that she was surprised I cut into my tissue pattern pages and didn’t trace them off.  I think she assumed I would trace them?  And I’m pretty sure I’m flattered by that.  But like a lot of things, when I watched my mother sew, she always cut into her pattern tissue; and when I took my Costume Lab in college, they didn’t seem to have a problem cutting into pattern tissue; and so I have always just cut into my pattern tissue.  Done and done.

I used to never use a rotary cutter, either.  And I might still not use one, except for another off-hand comment someone made to me.  I was manufacturing children’s clothing at the time, and I started to look for someone to help me with the sewing, another set of hands to take a bit of the workload and make it lighter for me.  I sent her some pieces so that I could look at her finished work up close; she was very experienced and had a long list of references, but I thought it would be a wise way to get to know one another before entering into a business arrangement.  After she’d received the cut pieces I sent to her, and before she started to sew, we had a phone conversation in which she said, “You don’t use a rotary cutter, do you?”  Be sure when you read that to hear a condescending downturn of vocal tone on the “do you,” because homie was for sure judging my cutting.  Which was done with shears.  I replied, “No, I don’t.”  To which she replied, “Yes, I can see that.”  Wow.

Next thing I did, I went out to Sandra’s boxes (and boxes and boxes) of notions and dug out the rotary cutter I’d seen there but thought I’d never need, “because rotary cutters are for quilters, and quilters are old ladies” (haha), and I got right to work learning more about it.  Maybe I am motivated more strongly than I’d like to admit by the opinions of others; more likely, I just don’t take close notice of unfamiliar tools or techniques until someone points it out in a way that makes me want to spend the time learning them.  (Having said that, home girl and I did not end up working together–I found a much nicer lady who was twice as fast for half the money and had the best attitude of anyone with whom I have ever had the good fortune to interact in a professional capacity.)

So I’ve been experimenting.  I use plenty of Swedish tracing paper to draft my own patterns, and now I’m using it more and more to make copies of original printed patterns so that I can keep the originals pristine and uncut and save them for later.  For Big 4 patterns bought on sale for $1.99, I still don’t bother, but with printed PDF patterns I’m finding that tracing is really a relief–I hate having to cut the pattern out with paper scissors and then go back and cut again on the fabric with fabric scissors, and the whole idea of putting pins through printer paper makes me crazy.

Tracing tissue is still a challenge for me, but tracing printed pages is a snap.  A basic #2 pencil works great–bonus points if it’s Star Wars (no points deducted if that pencil features Hayden Christiansen, but you do whatever the rules of your house require; the rest of us understand).  Trace all the lines on the pattern in the relevant size, and make sure to transfer the text markings, notches, match points, and notations for later.

I went into it thinking that this was a great way to preserve sizes on patterns where I might want to refer back to them or make another version in a different size later, but I didn’t calculate how much less work it is to trace a PDF pattern and file away the original pages and just use the lighter, softer, traced pattern pieces later–I have to credit Rae with inspiring me on this one, and it’s pretty great.  I find I am much more likely to jump in and make more than one of a particular style when I have the pieces traced, because I know that it won’t be at all difficult to work with the pattern pieces, which has significantly affected my productivity, in the best way.  And anything that leads to more finished projects and fewer piles of fabric with patterns tucked into the folds for a decade-plus (not an exaggeration), the better.

I’ve made a number of patterns that weren’t so precious since then, and I think I still come down on the side of NOT tracing cheap/easy to replace/unlikely to be sewn again patterns.  But with printed PDFs and with patterns that were expensive/rare/vintage, I can see tracing becoming my new norm.

Plus, with a PDF pattern, worst case scenario is that you decide you DON’T like the shape or the style or the pattern and that you’ll never, ever, ever use it again–and you recycle the printed pages as scratch paper and toss the traced version.  You’ll feel lighter, and you’ll never run out of places to jot down your shopping list again.

What about y’all?  What’s the last time you jumped in a tried a new technique that you’d heard a lot about but just never got around to adding to your toolbelt?  I wonder if it feels as rejuvenating to you as it does to me–the small, simple act of trying something new and seeing if it floats your boat–man, that really gets my creative wheels turning and brings back the excitement.  And all with a simple skill that we learned when we did worksheets featuring letters made out of dotted lines… 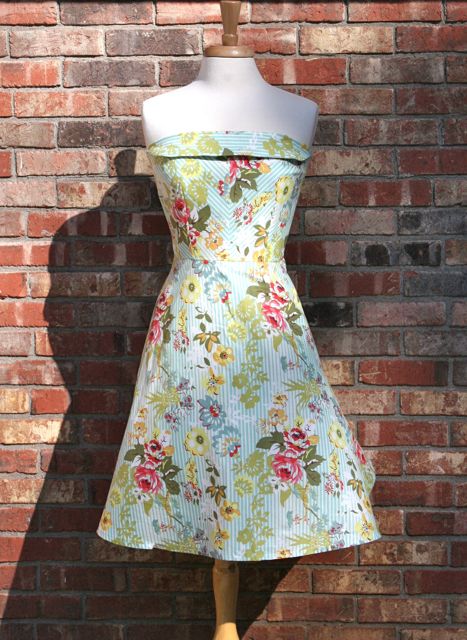 Enchantment Under the Sea Dress