I’m in Austin for QuiltCon the rest of this week, so it seems appropriate that I share the progress I’ve been making on the matching postage stamp quilts I’m putting together for my two younger girls–that is, with those of you who haven’t been following along eagerly on Instagram. 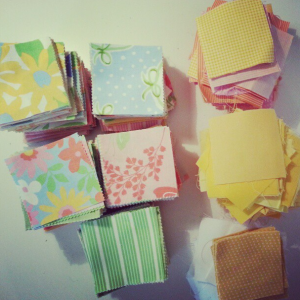 I started these quilts–really just one of them, at the time–nearly two years ago, when our youngest was just a teeny thing.  I thought the fabrics from these Dream On fabrics suited her.  But then we moved and the girls started sharing a room, and I thought it made so much more sense for them to have MATCHING quilts.  Naturally.  Because I never, ever do anything the easy way. 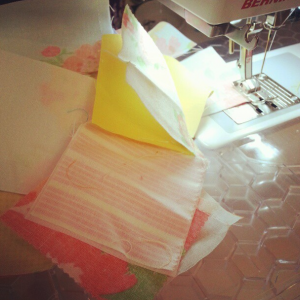 So the one became two, and I needed a lot more blocks than I initially had thought.  (Reading back over that first post, I cannot fathom what made me think I needed 63 blocks for a twin??  I mean, 63??)  Which meant a lot more cutting and stitching–my math now says I want to have these 6 blocks by 7, for an approximate finished size of 60″ x 72″, so I need to have 42 blocks per quilt, or 84 blocks total of 36 squares per block, which is a total of 3024 squares.  You heard me.  They’re going pretty quickly, considering.  I remember these all taking a lot longer back when I began, honestly–but I can’t really remember clearly if that’s why I set this project aside, or if I just spotted something else shiny and got distracted.  There was a lot going on in 2011 for me and my family, so it’s all a little fuzzy. 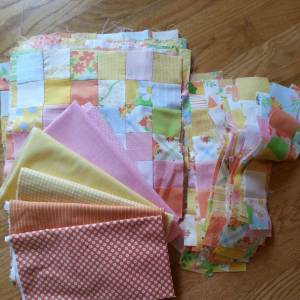 I picked this project up again about a month ago, determined to complete it so that the girls’ room could finally approach that mythic land of “Done” that no house I have ever lived in quite achieved.  It’s nice to have goals.  But then I hit a wall: it became painfully obvious that I was never in a zillion years EVER going to have enough fabric to complete even one quilt, much less two.  Instagram to the rescue!  Both @mascanlon and @darcychildress happened to have big chunks of Dream On in their stashes that they were willing to allow me to buy off them in order to finish.  Then it was just a matter of finding new blenders, since the ones I’d originally used were long out of print–luckily, Brenda over at Pink Castle Fabrics came to the rescue and had not just three but SIX prints that were totally perfect in color and scale for what I’m trying to do. 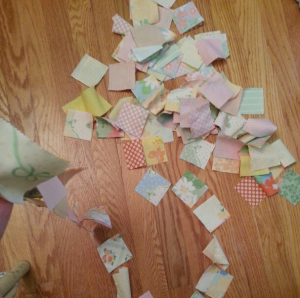 Since then, it has been long bouts of absurd amounts of chain piecing to get some progress made.  When I saw that I was low on my blenders, I realized I didn’t want to have half my blocks made with three fabrics and the other half have NONE of those fabrics, so I stopped stitching the strips of six squares into blocks and started leaving them just as strips–that way, I can take the pile of strips with the original fabrics and mix those up with the strips made using the new blenders, and all the prints will blend together and no one will be the wiser.  See how smart I am sometimes?  Woot. 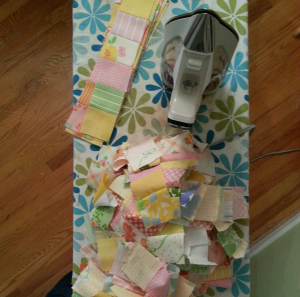 So I stitch pairs, and then make fours out of the pairs, and then make more pairs, and use those to make sixes out of the fours, and then set them all aside.  When I have a really obscene pile going, I hot up the iron and press all my seam allowances.  Then I start all over again.  I thought I’d over-bought when I got those new Dream On fabrics through IG, but now I’m starting to believe I’ll need to break into the fat quarters I got when I was drunk on success.  I’m maybe 3/4 of the way through, maybe?  And still Livin’ On A Prayer, y’all. 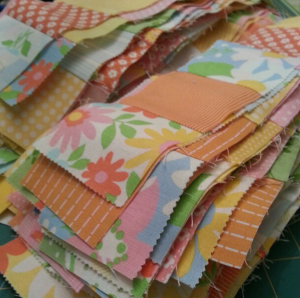 Stay tuned to see if I survive to see this project through.  I’ve also got some lovely Robert Kaufman linen set aside to make matching bed skirts, plus some pretty pink to lengthen the curtains in their room that were made for shorter windows in another house.  Throw in some paint to cover the spot on the wall where Baby got a little too excited with a crayon, and we might be closer to Done than I thought!