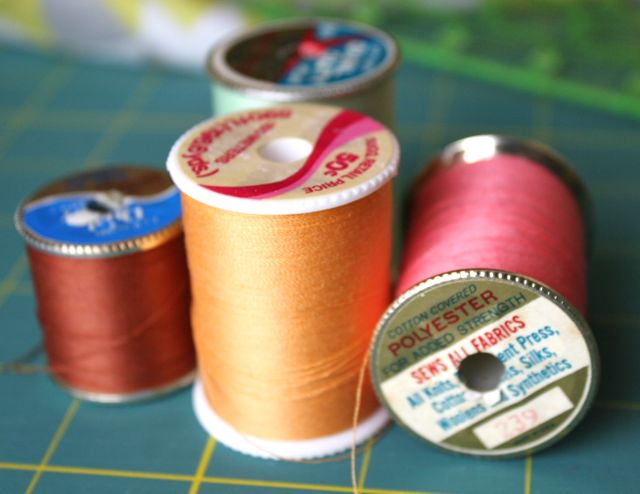 Last night, I started a new Intro to Sewing class, and as with all my classes, we got to talking about tools and supplies–and like many of my students, some of the folks in my class this month have sources for great supplies from other seamsters in their families.  One mother and daughter, who are taking the class together, have a mother/grandmother who sewed for years and years, and I overheard the two of them talking about seeing what supplies Gramma had that she might be willing to pass along.  I mentioned very briefly that if they found some old thread, they’d want to be cautious, since thread has a shelf life and doesn’t really last forever.

Honestly, I wasn’t trying to make a big deal–but was surprised by how surprised everyone was!  But then I thought about it on the way home and realized that I had been equally surprised when I learned that I couldn’t just use any old thread forever and have it work the same as always.  Thread totally has a shelf life, and using old thread on new projects is iffy at best–no matter how adorable those little wooden spools are.

I’ve written before about thread quality (or I thought I had, but can’t find the link now)–I feel pretty strongly about using the best thread for my projects.  For years and years and years, I thought the little bits of fluff that I would see on the throat plate of my machine were from the edges of the fabric as it went under the needle–it never occurred to me that it could be from the thread itself.  When you use a cheap thread, one that has lots of little fuzzy bits hanging off the sides or variations in thickness across the length of the thread, those bits get “shaved” off in the eye of the needle.  When that happens, it weakens the thread, and if you think about it, by extension it weakens your seam: worn-down thread just can’t take the same stress in a seam that fresh thread can.  So I really do always use the best thread I can find (usually Gutermann, which looks best under a microscope, but sometimes Mettler; I don’t dislike Coats & Clark, and will use it in a pinch, but I really believe the Gutermann is better and it certainly leaves vastly less lint in my machine).

The other consideration, and this is what we were talking about last night, is using NEW thread–or, at least, new within reason.  Thread has a shelf life, and like fabric itself, light and air and heat can all degrade the fibers of the thread and make them weaker.  Using old thread causes the same problems as poor-quality thread, often with even more breakage.  The folks at Atlanta Sewing Center, who service my Bernina, point out that there isn’t really any way to know for sure when your thread has “expired,” since all those environmental factors can vary, but there is a simple test you can do to see if your thread can cut the mustard: 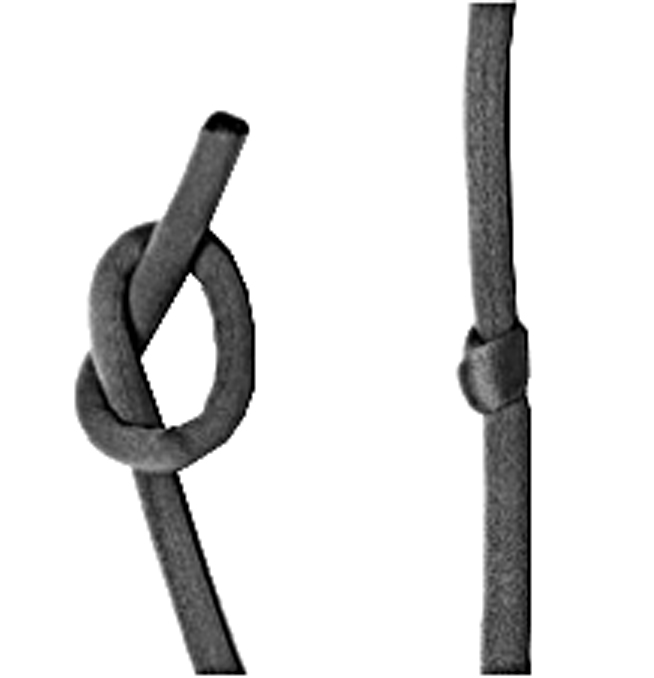 Take a piece of thread about as long as your forearm and tie a knot in the middle. Pull gently from both ends to test both the knot and the thread itself–did you know that the strength of a piece of rope or thread is cut by 50% when you put a knot in it?  Totally true–nerd fact for the day.  (Learned that in my Scene Construction Lab in undergraduate, so look at me!  Using my college degree in real life!)

If the thread breaks, no matter where on the length of the thread that break occurs, your thread has had its day and should be retired.  I tried this test on some of the 400+ spools that Sandra gave me, and some passed while others didn’t: 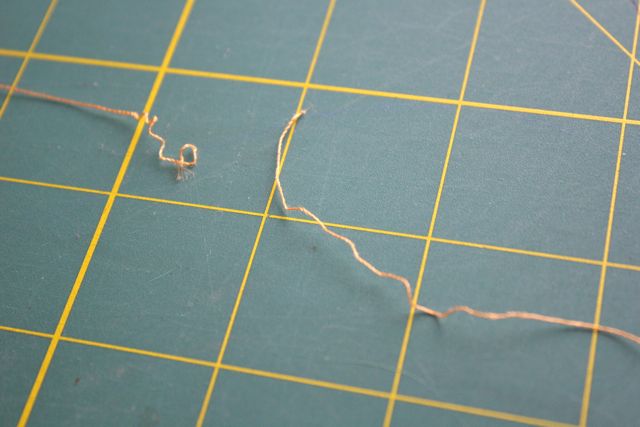 It hurts to toss out thread that looks perfectly good, even if you know it won’t play nicely in your sewing projects.  We used to have the cutest vintage gumball machine at the shop, and we filled it with vintage thread spools –wooden ones, older metal ones, any color we could find.  So, so cute (until I leaned over it with my giant pregnant belly and forgot how enormous I was and knocked the glass globe to the ground–cue sad trombone sound). 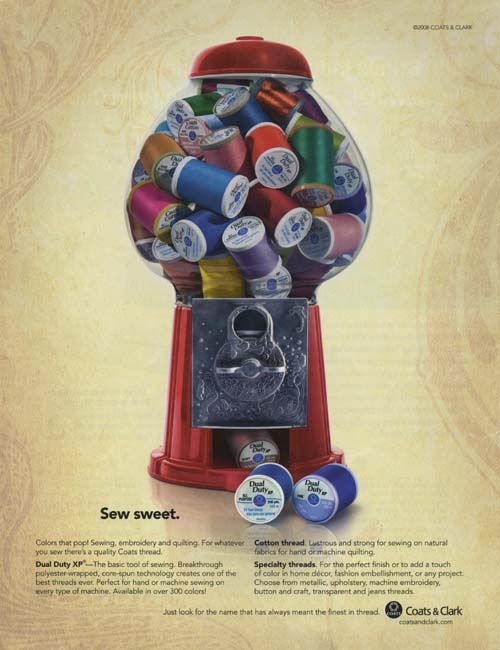 It was like this, but prettier, and on a stand.  Sigh.

I bet older threads would be amazing for some itty-bitty knitting, if you’re into that kind of thing (and aren’t those stitches out of control??). 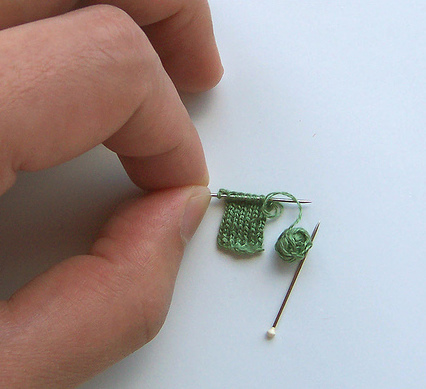 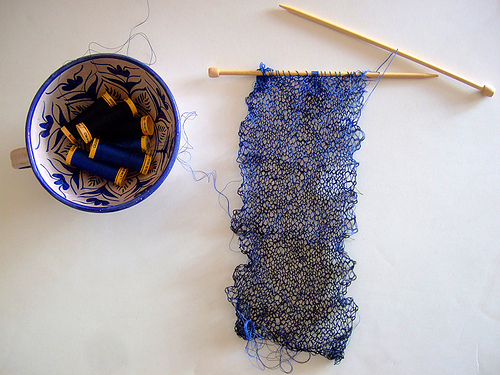 What about using it as stuffing in a pillow or pet bed project?  Un-roll the thread from the spool and then wad up the worn-out thread into a padded cushion. 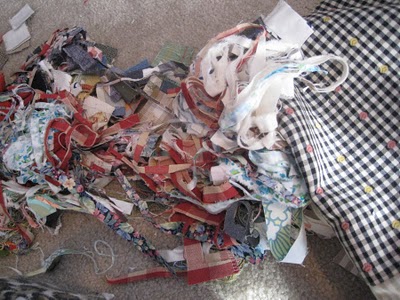 Image via the Green Bag Lady

I am militant about getting rid of things that are just taking up space in our house, and still have a pile of old spools to move along to better homes–any one have some more ideas for where 400+ spools of worn-out thread can be useful? 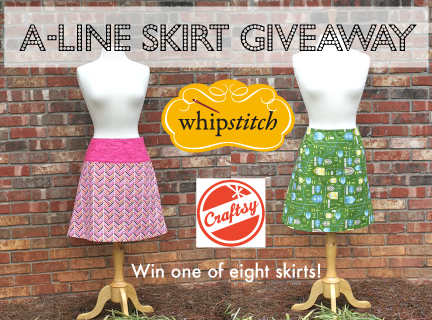 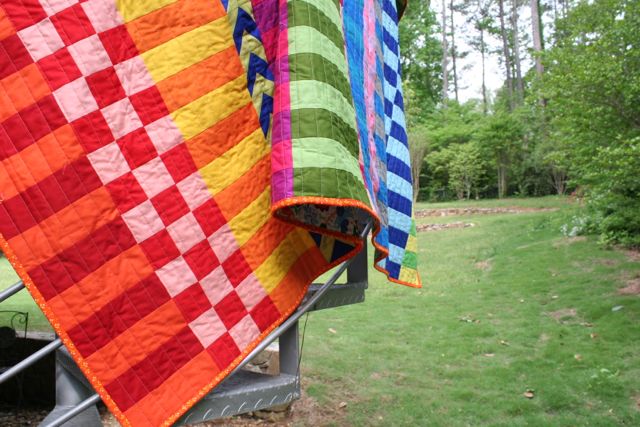